In 1943, Antoine de Saint-Exupéry wrote a novella Le Petit Prince (The Little Prince) that has gone on to become one of the most popular books of the 20th century with almost 140 million copies sold and has delighted generations both old and young ever since it’s release. The novella is still widely read and it continues to serve as an inspiration today, in 2015 it served as the inspiration for an animated film. The 2015 film named Le Petit Prince features a mixture of stop-motion animation as well as cg animation and features a new frame narrative as well as a slightly more upbeat ending (I highly recommend the new film, it’s really good!).

The novella also served as the inspiration for a new line of Lolita clothing by Baby, the Stars Shine Bright sub-brand Alice and the Pirates. Groove collaborated with BTSSB to release a series of dolls wearing outfits based on BTSSB’s line of Le Petit Prince inspired clothing. Three dolls were released as a part of the collaboration Isul as the titular Petit Prince, Pullip Le Renard (the french word for Fox which she is alternatively known as) based on the character of the Fox and finally Pullip Rose based on the character of the Rose.  The Rose is the Prince’s beloved, she is vain and proud which drives the Prince away but his memory of her also ignites his desire to return.

Pullip Rose was the final doll to be released as a part of the Le Petit Prince collaboration line. She was released in February and has a MSRP of 22000 yen which is approximately $205 USD at the moment. I purchased mine via Pullipstyle where she is still available for sale as of this writing for $150 link. 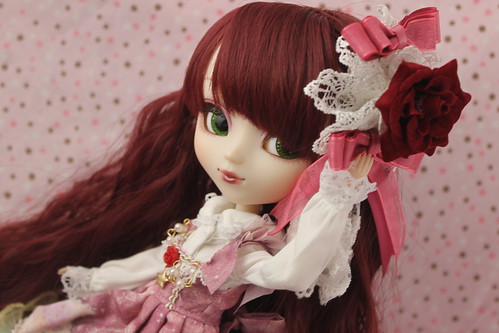 Ah! I Am Scarcely Awake. I Beg That You Will Excuse Me. My Petals Are Still All Disarranged…….. Feel Like So

Pullip Rose in the box 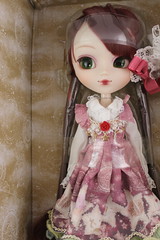 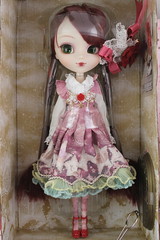 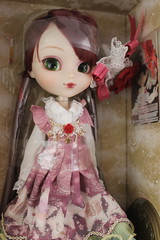 Pullip Rose doesn’t really come with accessories, maybe a small rose would have been a nice addition but I am overall very happy with this release.

The color of Rose’s wig is really spectacular it is almost like a wine rose, it’s a very rich color and not something commonly seen on Pullip. The quality of the wig is nice, it is soft and also pretty full/thick but not so full that it becomes an uncontrollable frizzy nightmare. 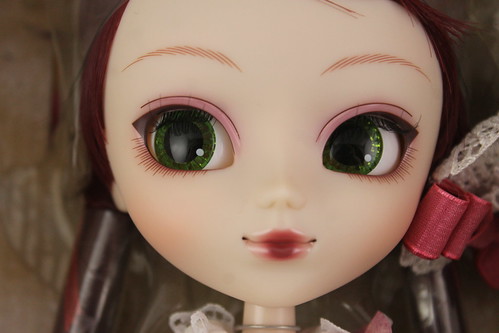 Rose has a really nice face up! Her eye make up is pretty similar to Pullip Fox‘s in style though the colors are different. I love the little bit of pink eye shadow she has, it works really nice with the colors of her eye make up and the green eyes offer a striking contrast to it. Her lips are gradient, it’s more pronounced on the lower lip though it is present on both with a deep shade of crimson in the center changing into a more subdued rosy pink on the sides. She has nice eyebrows. 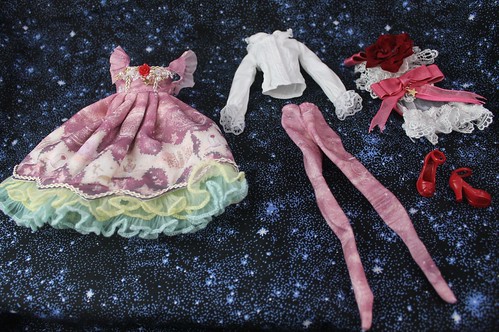 Rose’s outfit is based on real life sized fashions by Baby, the Stars Shine Bright sub-brand Alice and the Pirates. Since Baby, the Stars Shine Bright deletes sold out listings I have decided to include archival links to Lolibrary so if anyone is curious they can see the real life counterparts of Pullip rose’s stock. Rose’s stock consists of a dress based on the Little Prince ~My Tiny Horoscope~ Rosé JSK- link, a blouse based on the Little Rose Blouse – link, tights based on the Starry Sky Horoscope Print Tights – link and the Little Rose Headdress – link the shoes are an original design by Groove. If you would like to coordinate with your doll it would cost approximately 60000 yen to do so, the doll itself might make a good alternative if you love the outfit/theme but are unable to attain the human sized outfit.

Stock quality? For the most part, I was quite impressed with the quality of her stock it is very detailed and well-made. The tights are thick, the headdress is well constructed and the shirt is very nicely done as well (the collar was sewn on correctly yay!). The dress is for the most part amazing my only complaint is the edges of the sleeves on the jumper are unfinished but I realize this was probably done to reduce bulk which is a common issue with doll clothing as some things just don’t translate well to doll size. I especially love the detailing around the neckline and her little rose charm. 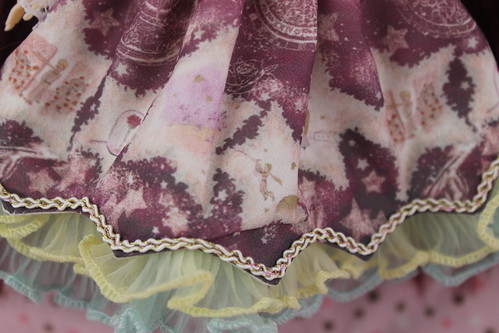 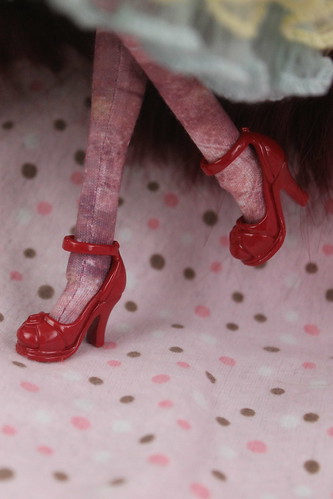 Close up of the shoes, they are an original design by Groove though this particular shoe mold is something we have seen before as Pullips Lala, Sala and Sola came with these shoes in different color schemes as well as J-doll Vasterlanggatan and I seem to recall them being used a few other times as well. 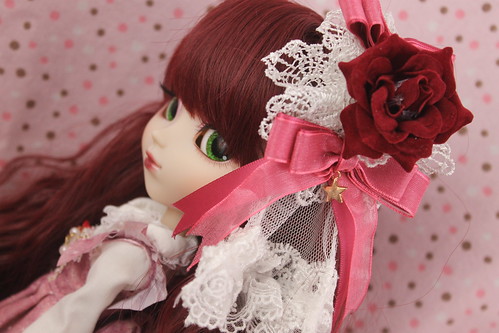 Close up of the headdress, in addition to the titular rose it’s a mix of ribbon and lace. I particularly love the rosey pink color of the ribbon and I like the little metal star charm. 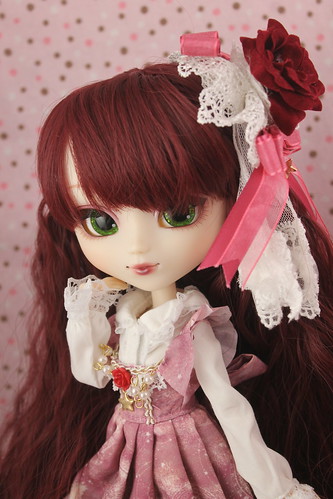 Rose is such a stunning beauty, it’s easy to see why the Petit Prince would have fallen for her! 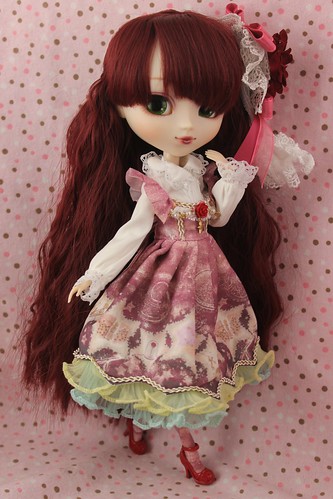 I love the color palette used for Rose, the wig and the face up really complement the BTSSB fashion nicely I think Groove made really wonderful strong choices. I love the dusty rose color of her dress and I love the contrast of the yellow and blue frills underneath the skirt. 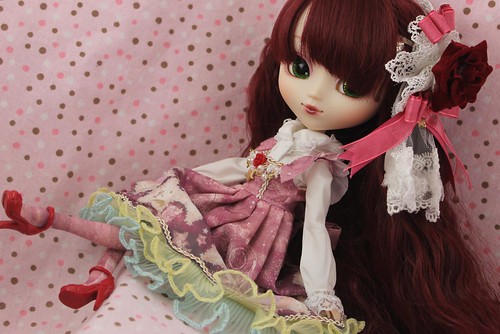 Pullip Rose would make a wonderful addition to just about any Pullip fan’s collection but especially for fans of Le Petit Prince and/or Baby, the Stars Shine Bright. She is definitely one of the most exciting releases to come out this year. 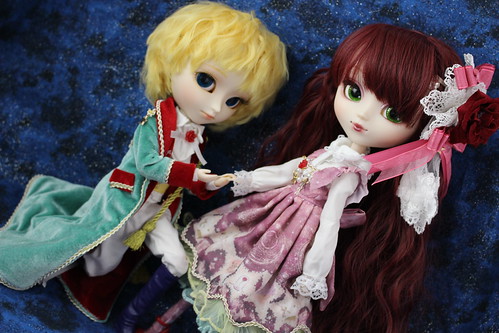 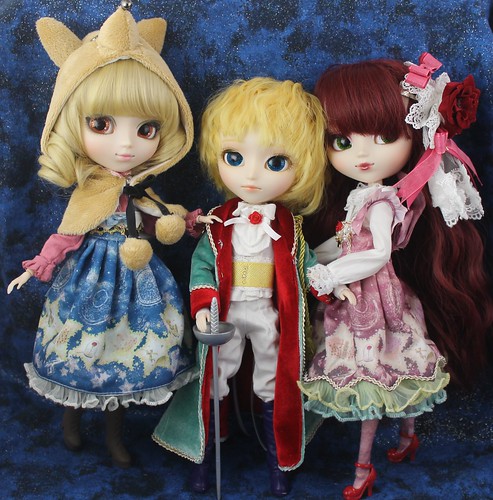 The complete Le Petit set series of dolls: Pullip Fox, Isul Petit Prince and Pullip Rose, which one is your favorite? I honestly don’t think I can choose, I was initially most excited about Fox but all of them are exquisite in person! 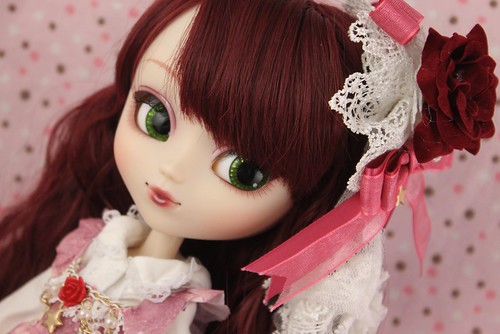