Starting in 2013, Groove started to release a new line of products called Make It Own. The idea was you could really make Pullip (or friends) your own by customizing them. Items in the line range from blank doll kits, eye chips, bodies, wigs, outfits and even shoes.

Blank Kits Everything you need to make your own Pullip, Dal, Isul or Taeyang. Includes body, head, eye mechanism, eyechips, eyelashes and screws. So far Pullip, Dal, Isul and Taeyang kits have been released in Natural skintone

Bodies– First released in September of 2013. Identical to stock bodies but great for replacement parts especially since not all members of the Pullip family have an easy rebody alternative. So far all bodies have been released in “natural skintone”.

The 1st Series of Shoes included four different sets of two pairs shoes, three of the sets were designed to fit Pullip and one set was designed for Taeyang.

Shoes Once again we have four different sets of two pairs  of shoes, three of the sets were designed to fit Pullip and one set was designed for Taeyang. 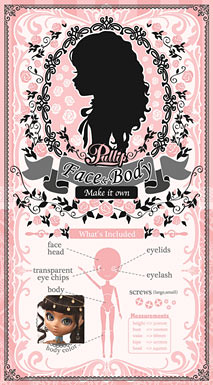 All photos on this page are promotional images belonging to Groove Inc. and were taken from their various websites

26 Responses to Make It Own