Additional Information
Release: Standard Release
MSRP: 16000 yen
Release Date: 6/2013
Product Number: P-097
Feel Like So: Abracadabra!! I will make you mine with this magic Spell!! …. Feel Like So.
Face Up: 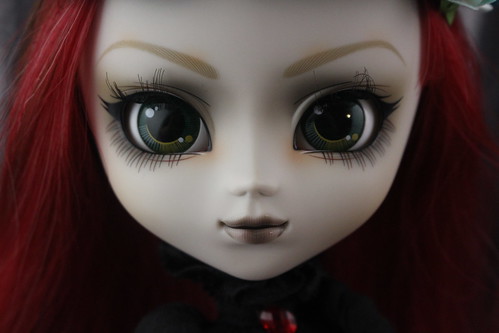 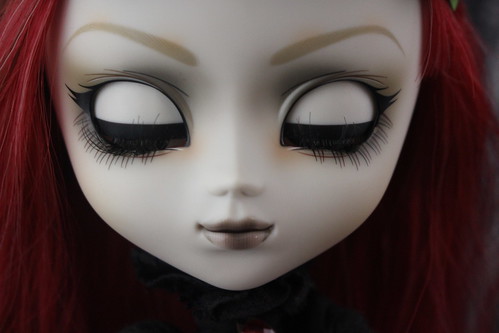 Wig: Red and brown mixed color wig with one small braid on either side.
Stock: Wilhelmina’s stock consists of a dress, witch hat, corset with attached overskirt, tights, boots and a broom. 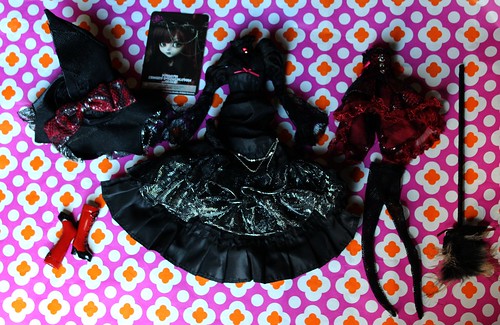 Body Type: 4
Obitsu Match: Wilhelmina has an almost grey undertone to her skin so she does really have an ideal obitsu match, white is closer to her skintone but it is a very imperfect match.
Stand:  Black Plastic Stand
Special Notes: None
Known Issues: Possible staining issues, boots can be hard to get off and on.
Similar Doll Recommendations: The other dolls from the Mansion of the Immortal Dolls: Isul Vermelho, Dal Lyla & Taeyang Valko as well as Pullip Elisabeth & Pullip Carmilla.