In 2005, Pullip Beressa was announced for a July release on May 10th but was cancelled on May 18th after backlash. Jun Planning announced her as a lady spy Pullip but her outfit bears a strong resemble to Nazi uniforms which caused quite a bit of controversary among fans. Due to Beressa’s cancellation there never was a Pullip release for July 2005.

“The doll originally designed for July 2005 was “Beressa,” a ‘lady spy’, who came with a black uniform and cap with gold braids and red details, including a red arm band and a pistol. Although no swastikas were visible on the doll in photographs, the resemblance of the uniform and gun design made it appear to some that the doll was designed after a German SS officer uniform. Jun Planning announced the cancellation of Beressa out of respect for the 60th anniversary of the Holocaust. Lan, the doll that was to replace her, was delayed for a month and as such there was never a doll for July 2005.” source

Pullip Lan Ake was announced as a July release the day that Pullip Beressa was canceled; a color swapped version of Lan Ake, Lan Ai was later added to the release schedule. Beressa’s cancellation had a ripple effect which had a significant impact on the rest of 2005’s Pullip releases, the Lan twins who were announced to take Beressa’s place in the release schedule were initially announced as delayed until August on July 25th. On July 29th, the Lan twins were announced as being further delayed until September which means there were no Pullip releases for July or August of 2005. Additionally the announcement on July 29th also announced the delay of Pullips Summer Purezza,  Rovam, Greggia & Latte were by one month .

Additional Information
Release: Canceled Release
MSRP: 8000 yen
Release Date: Announced for 7/2005 but cancelled/never released
Product Number: F-540
Feel Like So: You get burnt when you touch me!! I am more like a lady spy… Feel like this. 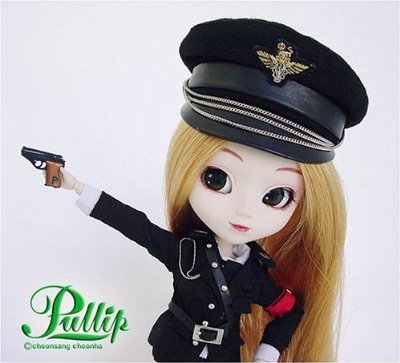