For the benefit of those who aren’t aware, I’ll cover some background Le Petit Prince is a novella written by Antoine de Saint-Exupéry in 1943 and it has been delighting young and old ever since. The novella has been translated into over 250 languages and is one of the best selling books like ever. I remember being assigned to read the novella when I was still in grammar school. Last year a new film based on the beloved classic was released, the film used a mixture of stop-motion and 3D animation. The film was supposed to be released in March in the US but was suddenly pulled from distribution much to my chagrin as I had already bought tickets 😦 . Netflix has since bought the rights to distribution in the US so hopefully it’ll be on Netflix soon or if you are impatient like me, you can import a copy on dvd or blu-ray from one of the countries where Le Petit Prince has already been released. I will say that the new film is quite excellent though it does add some new elements to the story which die-hard fans of the book may not care for.

Oh that’s right, I forgot we talk about dolls here sorry for the literary and French-Canadian cinematic diversion but wait this wasn’t a complete non-sequitur because Groove has released a series of dolls based on Le Petit Prince.  The new series of dolls based on Le Petit Prince was produced in collaboration with Baby, the Stars Shine Bright sub-brand Alice and the Pirates a Japanese clothing brand specializing in whimsical lolita style clothing. The clothing featured on the dolls in this series are based on fashions released by BtSSB in actual human sizes, so if you would like to you could match your doll!

Three dolls have been released in this series the titular Petit Prince as an Isul (whose review you can see here),  Pullip Fox or Le Renard (the fox in French) and Pullip Rose who will be the next doll to be reviewed here. Pullip Fox was the first of the two Pullips released as a part of the line and she was released in February. She has a MSRP of 22000 yen,  I bought mine via Pullipstyle for $150 where she is still available as of this writing link it should be noted that Pullipstyle was only able to secure a limited supply of the Le Petit Prince dolls so if you want her don’t hesitate as she probably won’t last long until she sells out like the Isul already has. 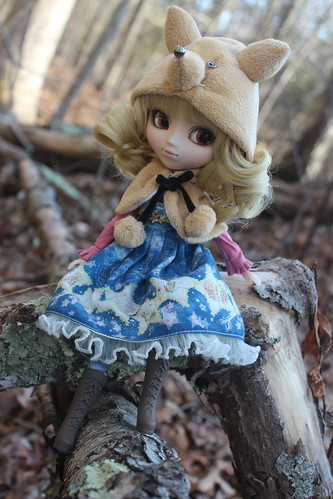 The Fox in the box. 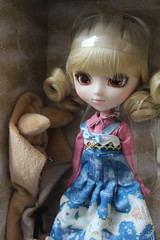 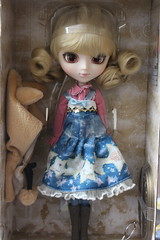 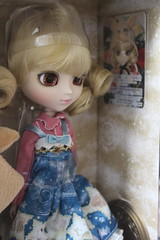 As I stated before, Fox’s outfit is based on real fashions that were released by Baby, the Stars Bright so I have included links to the human sized counterparts. I chose to use links from Lolibrary which is an incredibly useful database for lolita clothing items rather than BtSSB themselves as the have the rather annoying habit of deleting listings after items have sold out and I didn’t want to include links that are either already dead or likely to become so in the near future. Fox comes with a fox caplet/hood, a blouse based on the Starry Sky Horoscope blouse in plum link, a jumper based on the My Tiny Horoscope dress Etoile in blue link , tights based on the Starry Sky Horoscope Print Tights in blue link as well as a rather underwhelming pair of boots.

The boots and the fox hood seem to be the only original components of the outfit, everything else was based on designs by BtSSB. I think the fox hood is utterly adorable and was impressed by how well it was made and the boots are fine I just wished they just seem a bit plain compared to the rest I wish the laces had been painted at least. In general I was really impressed by the quality of Fox’s stock outfit but the collar was incorrectly sewn on the blouse which causes it to have a tendency to stick up at an angle, I considered resewing it but since it is hidden by the fox hood/caplet anyway I decided to forgo it for now. It’s a weird flaw that I just had the misfortune of receiving on mine I have not noticed this issue in any other owner photos.

The wig? Wigs with curls especially always cause me to hesitate a bit as I’m always worried hopefully irrationally that I will somehow ruin them. Her wig is very soft and the color is lovely, I was honestly pretty pleased with the quality. 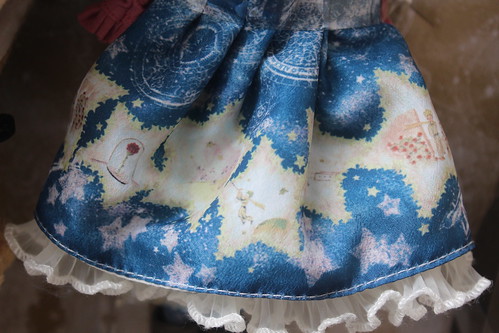 The skirt has a print based on several of the watercolor book illustrations by Antoine de Saint-Exupéry, I think it’s a wonderful homage to the book. 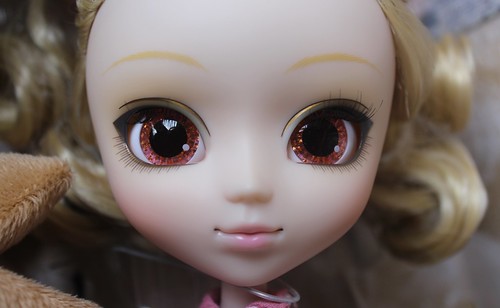 Such a pretty face up! Fox has the palest barely there shade of pink lip make up. Her eye make up is accentuated with gold highlights in the eyeliner, I can’t recall Groove ever really using gold before on a Pullip’s face up. Her eyebrows are very sweet, almost timid.  Fox’s eye chips are pink, lined in deep golden orange with glitter in the same color. I love how the glitter sparkles and I love the contrast of the orange and the pink, it really makes her eyes almost seem to come alive! 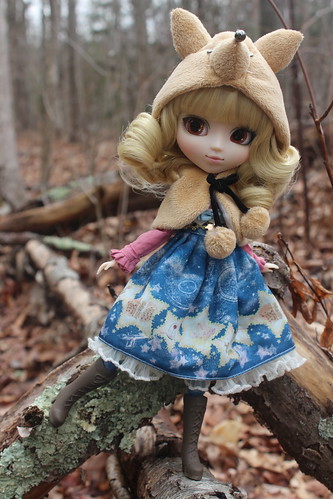 Since the weather is finally starting to get warmer here in New England I decided it appropriate to most of Fox’s photos outdoors, especially since there is an actual fox that I’ve periodically spotted in our yard around twilight. 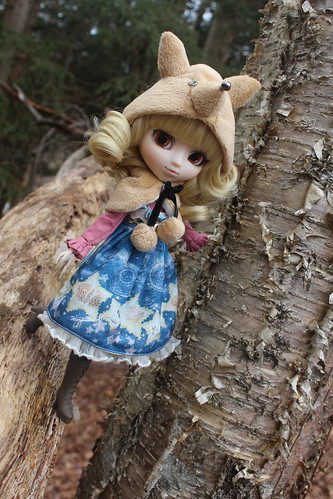 I really enjoy the combination of colors in her stock outfit, the dusty rose color of her blouse is complemented nicely by the bright blue of her dress and the fawn coloring of her Fox hood. I think if the boots had painted dark blue laces they would have been perfect and suited the outfit wonderfully, I guess they do not distract from the outfit but they are not particularly memorable either. 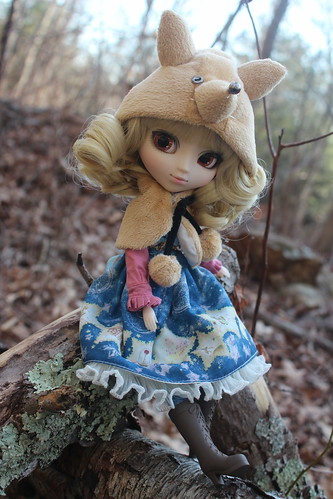 I don’t think I’ve mentioned it before but I love the sheer, scalloped bit around the hemline of the skirt not only does is it adorable it provides a bit of contrast and keeps her dress and tights from being entirely blue on blue and kind of blending in with one another. 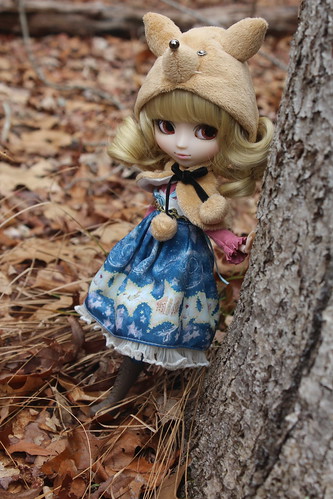 In most mythologies, foxes are considered sly tricksters in Le Petit Prince the fox wishes to be tamed. The fox teaches the Prince a valuable about building trust and relationships. The Fox Pullip definitely looks to be a tame almost shy girl. 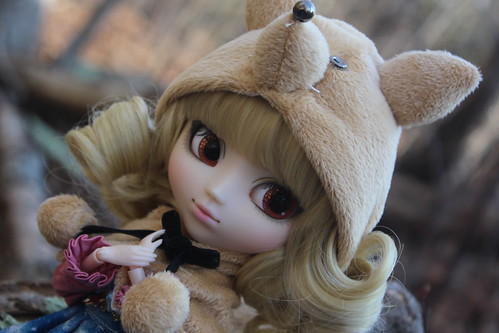 The fox hood is adorable, I especially love the button eyes. It almost reminds me of something you would see someone wearing in a children’s play production to represent the Fox. For those concerned about such things the hood is not made out of real fur. 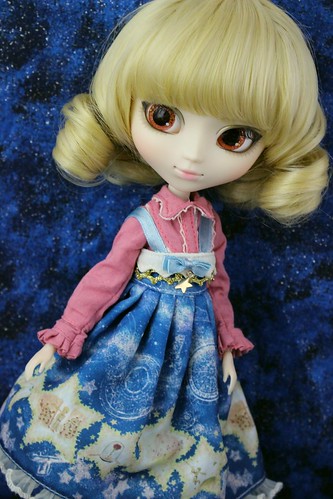 I decided to take a few pictures of her without the hood on so the details of her blouse and dress could be seen a little better, I love the little bow and star at the bust line of her dress. The collar of her blouse is said to resemble fox ears, I love all of the exquisite little details like that! 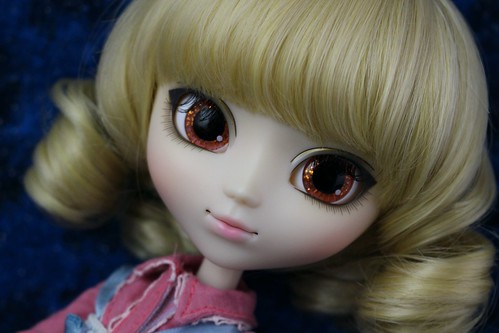 I would totally recommend adding Pullip Fox to just about any Pullip collection, she is a very sweet doll with very well made stock. The collaboration Pullips like Fox that are produced with clothing companies such as Baby, the Stars Shine Bright present an interesting opportunity for fans of lolita fashion. The clothing from companies like BtSSB can be quite expensive the human sized jumper, blouse and tights from this set for example would cost approximately $450 the Pullip only costs a fraction of that and would make a darling addition to fans of lolita clothing collections as well (or she would perfectly complement your outfit if you already bought the outfit).  While I think lolita fashion can be quite cute and will fawn over pictures, personally it’ll be a cold day in hell before I wear a dress again. 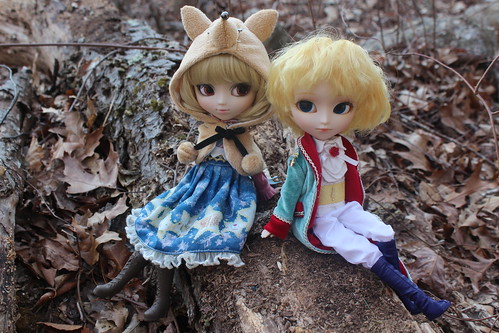 More photos of Pullip Fox as always on my flickr, if you find her irresistible remember that she is currently as of this writing still available for purchase via Pullipstyle but likely won’t last for very long. 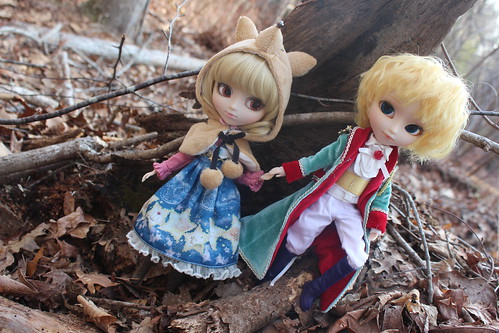