Little Pullips are a miniature version of Pullips. They are not as articulated as their larger counterparts and their eyes are not mobile like Pullips (they can not look left/right or blink. They are a little less than five inches tall.

In July of 2011, the DoColla line started. DoColla is a contraction of the words doll + collaboration, all of the Little dolls released as a part of this line were part of a collaboration. Dolls from this from line were based on characters from different anime series such as Little Pullip Grell, Little Dal Ciel and Little Taeyang Sebastian were based on characters from Kuroshitsuji. DoColla also featured the debut of Little Taeyang and Little Byul +. 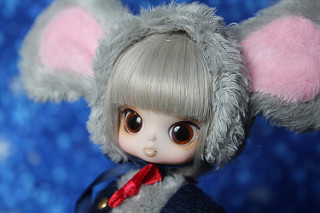