Taeyang Butler was released in June of 2007. Three months prior to his release in March of 2007 a possible counterpart release a maid themed Pullip, Pullip Stica was released.

Additional Information
Release: Standard Release
MSRP: 10000 yen
Release Date: 6/2007
Product Number: F-923
Feel Like So: Getting ladies eyes… I am terribly sorry. My heart is only for the feelings of loyalty to my lady.
Face Up: 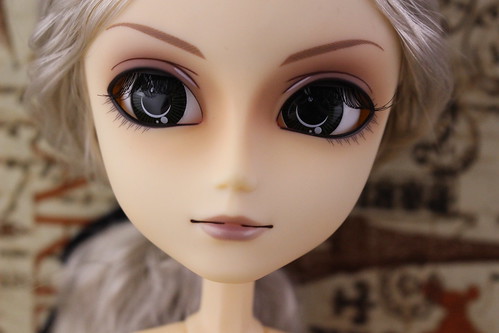 Eye Chips: Dark eye chips (unsure of color ^^;)
Wig: Grey wavy wig.
Stock: Taeyang Butler’s stock consists of a jacket, vest, shirt, pants, underwear, socks, shoes and a plastic serving tray. He also comes with a simple black hair tie, pen and promissory letter that are not pictured (if anyone would like to donate a picture of the pen and promissory letter please email me at pullipsandjunk@gmail.com ). 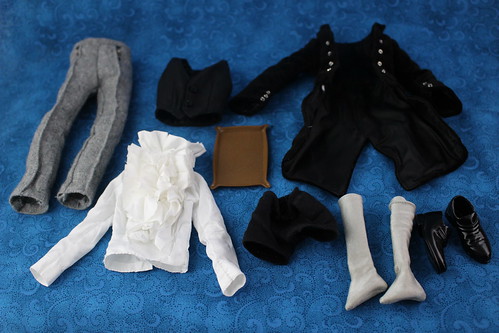 Body Type: Namu/Taeyang body
Stand: Metal Stand
Special Notes: Taeyang Butler was the last Taeyang to be released with the original Taeyang mechanism, while he can wink he lacks the ability to keep his eyes closed.
Known Issues: Shoes are hard to remove.
Similar Doll Recommendations: Pullip Stica

Promotional Photos these photos were taken from Jun Planning’s website.