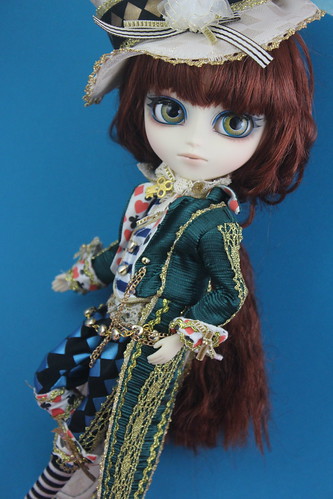 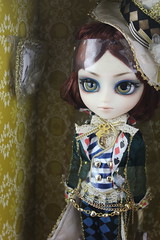 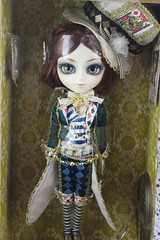 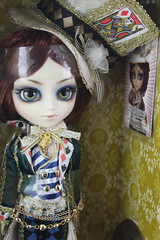 Isul Classical Mad Hatter comes with an amazing jacket, shirt, vest, pants, tie, socks, shoes and of course a hat. There is a series of gold chains attached to his jacket. He also comes with a card and the standard stand in gold as well. His stock quality is really nice and I love the bold mix of colors and patterns that were chose for him with blue checkerboard pattern of his pants, the card suit lapels on his jacket and his cuffs.

Wig quality? The color is a really nice deep chestnut. While the wig is a bit untamed it is soft and the quality is nice, it’s definitely one of the better curly/wavy wigs that Groove has made. 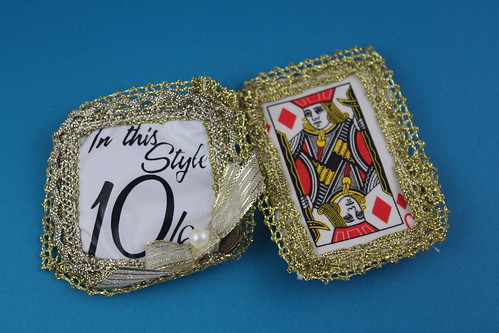 What’s the little thing on the side of his box? It’s a pin with “In this style 10/6” written on it, at first I couldn’t figure out why it had been included and then I realized that the card on his hat was not sewn on and that it was a pin too. The two pins can be switched based on preference, most of my pictures were taken with the default Jack of diamonds card on before I realized what the other pin was for as it is not mentioned anywhere in the product description ^^; . 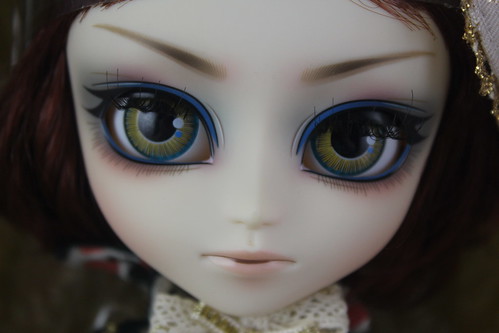 Isul Classical Mad Hatter has one of the dynamic face ups that we have seen on an Isul so far! His eye make up is really something, he has dramatic black heavy eyelashes and deep blue eye shadow. He has very piercing eyes yellow rimmed in blue which is very unusual. His eyebrows are really nicely painted and detailed as well, they have an almost ethereal quality to them. His lips are painted as to appear somewhat parted. 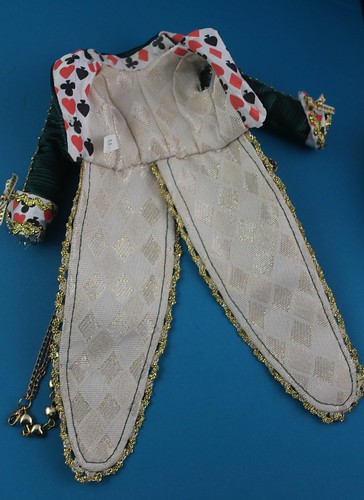 Can we talk about this boy’s stock for a minute? I was really impressed with the overall quality of his stock, the jacket was especially nice. It’s lined with the same material as his hat is made out of. 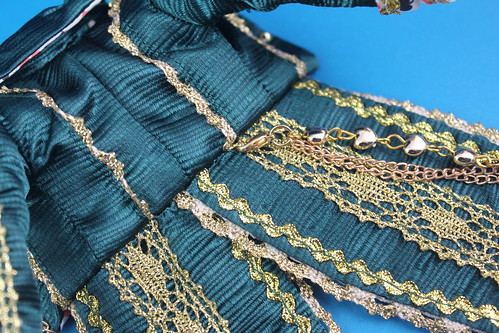 Close up of the back for details. This definitely seems to be one of the one more detailed items I recall seeing on a boy doll from Groove. 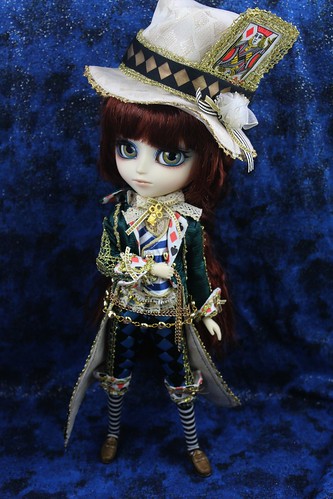 He is quite the splendid boy! He is definitely one of the more stylish and fashion forward Isuls. 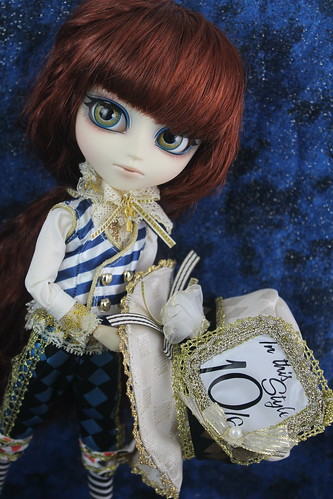 Without the jacket! I love his lacey cuffs. His hat is nice though I feel like it needed a little bit of tissue paper to puff it out/help it keep it’s shape. 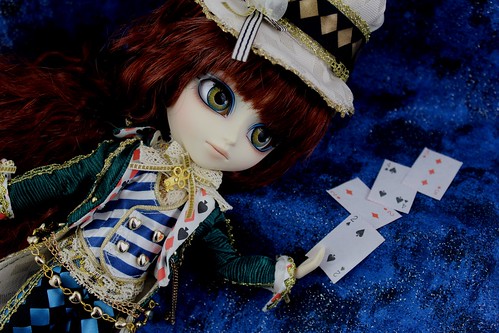 Classical Mad Hatter did not come with any accessories, luckily I happened to have some extra tickets left at the arcade after playing Batman themed whack-a-villain (which frankly is quite possibly the best use of theme for a whack-a-mole arcade game and yes I now have the high score at my local arcade ^^; ) and was able to get some appropriately sized cards for him. 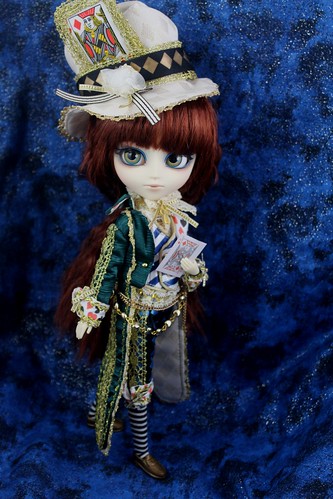 I love all of the gold accents in his outfit, they create a nice contrast with the different patterns that were used for his stock outfit and help tie everything all together. 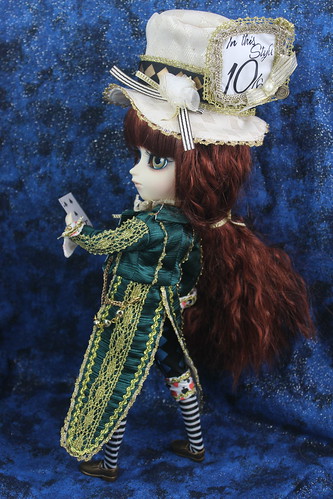 I wanted to include a picture that showcased the back of his stock outfit as it is very nicely made! 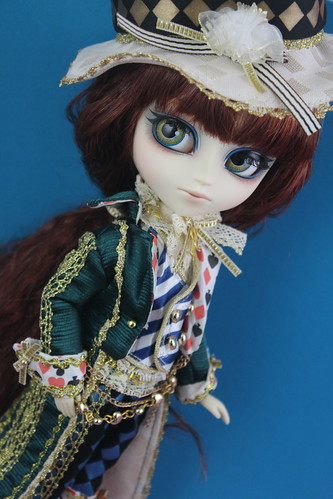 I named my Classical Mad Hatter after the character of the same name in ABC’s tv show Once Upon a Time. Jefferson was the Mad Hatter in the show although he has not been featured on the show in quite some time (probably because he is now Marvel’s Winter Soldier) I was quite fond of the character. 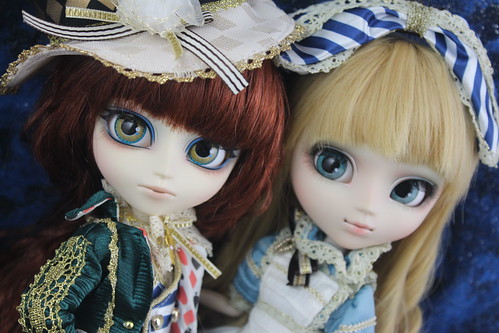 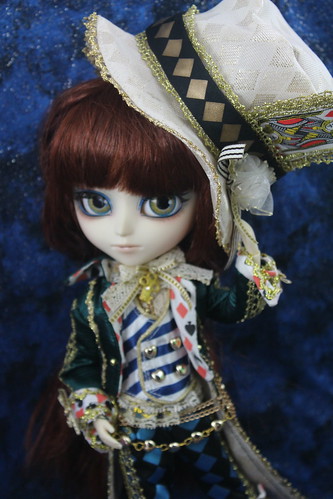 I’m very impressed with the quality of this release, it seems a lot of care and effort were put into designing him and it shows! I would definitely recommend for fans of Alice in Wonderland and/or fans of Isul as he is a really amazing release. Even though he has been here only a short time, I can safely say he is already one of my favorite Isul releases alongside Isul Midnight Deja Vu. 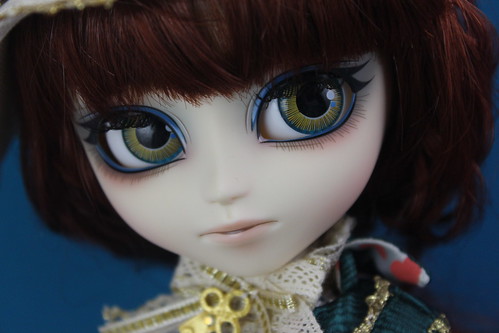 More photos of Classical Mad Hatter can be found on my flickr, he is available for purchase via Pullipstyle. 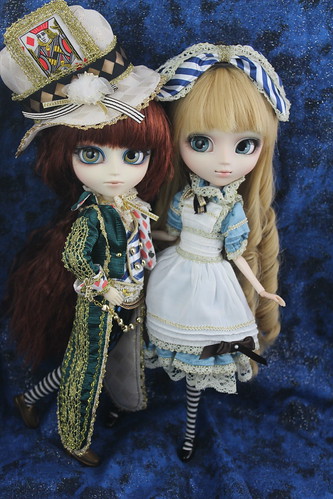