Looking back at Pullip Giata/Alte and Pullip Blanche

Pullip has been around since 2003, it’s pretty rare for a doll line to last for that long. The Pullip line even outlasted Jun Planning the original company that produced it, production of Pullip has continued under Groove Inc since early 2009. I recently had the opportunity to acquire some old Jun Planning catalogs that were originally given to retailers/potential retailers, these catalog books showed new as well as upcoming releases so they are kind of interesting to look through as they gave glimpses of some dolls before their designs were really finalized. As you can probably guess, I’m a bit of dork for Pullip history as well as sharing the Pullip love so I couldn’t resist scanning a page from one of the catalogs to share.

This scan is from the Winter 2006-Spring 2007 Doll Catalog it features Pullip Giata who appears to be an early prototype of Pullip Alte, an earlier prototype Blanche who looks a bit different from the actual release and Pullip Stica who more or less looks the same. It makes sense for the later releases to still not really have their designs finalized at this point as their release was still a way off at this point. Pullip Alte was released in April of 2007, I recently did a write up of her that can be seen here. 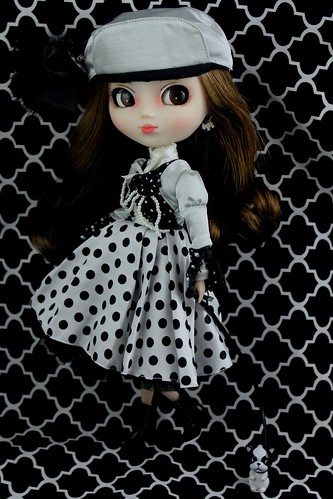 I think it’s really interesting to look at how a prototype has evolved to a production model, I understand that things sometimes have to be changed  because of cost or practicality (maybe Jun Planning couldn’t source enough fabric etc). I must admit that I actually prefer Giata’s original design over Alte’s. I preferred the fabric choices of the original as well as the overall more casual style. I wonder why it was to be changed. Pullip Alte is still a strong release but I think Giata would have been an even stronger release!

Alte/Giata wasn’t the only doll whose design evolved over time, while Pullip Blanche’s outfit is more or less the same (her laurels/flower headdress are green on the production model versus gold on the original prototype) her face up has changed quite a bit.

In March of 2007, Jun Planning attended the Paris Fashion Doll Expo and had several dolls on display including recent releases as well as prototypes of upcoming releases including Blanche. The photos from the event are by Cauldroness and have been reposted with permission, you can read her write up of the event here.

This event was closer to Pullip Blanche’s actual release date in June, she appears to kind of be somewhere in between the original prototype and the actual production model. Compared to the production model the makeup on this display doll is overall lighter in color, the blushing is less intense, her lips are quite different and less detailed. Her eyes also look to be a bit lighter green than on the production model.  Blanche’s production model always seemed a bit melancholy to me, the display doll and the original prototype both look much cheerier to me. I always loved Pullip Blanche’s somewhat gloomy expression so it’s a bit strange to me to see her so happy looking. 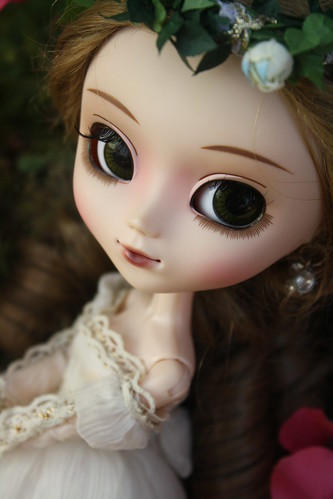 Please forgive this old photo of my Blanche, I wanted to include a picture of her to show how different her expression was from the prototype but didn’t realize how long it had been since the last time I photographed her. I really want to take her out for photos now!

I hope you have enjoyed this trip down memory lane with me.