Every year many companies release limited items exclusive to San Diego Comic Con, these items range from variants covers of comic books to toys produced solely for the event. As SDCC has become one of the biggest events of the year for many different fandoms, producing an exclusive has become a great opportunity for many companies to showcase their different products and maybe even attract some new fans!

This year, Groove collaborated with DC Comics to release new versions of dolls based on DC Comics characters Harley Quinn and Wonder Woman. Groove had previously collaborated with DC Comics starting in 2011 with the SDCC exclusive releases of Pullip Batgirl and Pullip Catwoman (recolored versions of both dolls were available at Wonder Festival that same year), they were joined in 2012 with SDCC exclusives Taeyang Batman and Pullip Wonder Woman as well as NYCC exclusive Pullip Harley Quinn and in 2013 they were joined by Supergirl. This year’s SDCC exclusives Pullip Harley Quinn Dress Version and Pullip Wonder Woman Dress Version were available for purchase during SDCC at the Teddy Scares booth as well as via their website JPGroove . The dolls were priced at $130 each at SDCC or $155.99 each via the website (there was a 15% off coupon promotion during SDCC). 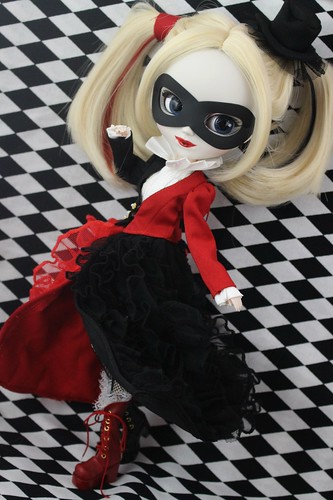 Love makes me do many things…..I can easily dress up for you, Puddin’!!….Feel Like So.

JPGroove didn’t even publicly confirm that there would be a SDCC release this year until early July when they first mentioned upcoming exclusives via their facebook page, the dolls themselves were not revealed until July 17th only a few days before SDCC would begin.  There were so many really awesome SDCC exclusives this year that left a gaping hole in my wallet that I was not able to get the Pullips until recently via JPGroove. I’m a huge fan of Harley Quinn so I, of course had to add the new version of the Pullip to my collection. I love Harley Quinn’s character so much that I had commissioned Requiemart to make a custom Pullip Harley Quinn years before Groove would officially make a Pullip release based on the character; here’s my custom Harley Quinn alongside her official NYCC Pullip Harley Quinn. 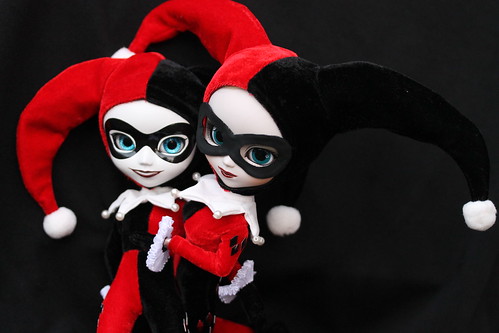 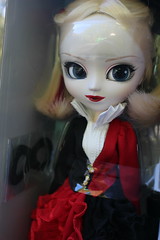 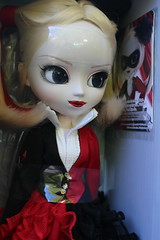 Pullip Harley Quinn Dress Version comes in one of the slimmer boxes without a window, there is a sticker on the outside of the box with Harley Quinn’s logo on it denoting which doll is inside the box that can be seen here.  I really don’t mind the slim boxes as they take up significantly less space and it still gets the job done as far as protecting the doll. Harley Quinn comes with a mask but does not really come with any other accessories, I’m kind of disappointed about the lack of a mallet as her original release did come with one and I think it really could have complimented her look nicely. Despite the slimmer box, she still come with the standard card as well as a black plastic stand.

Harley Quinn does not come with a numbered certificate, it is not unusual for limited Groove dolls not to come with one it’s always nice when they are included but their inclusion has been really sporadic over the years. While Harley Quinn Dress Version was announced as limited there is not a known number associated with her so we really don’t know how exactly how limited she is. 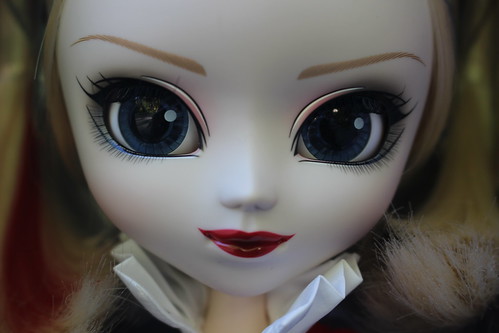 I think the most remarkable thing about Harley Quinn’s face up are her lips! The color of her lips is an almost blood red, the shape is the really remarkable feature though she shares the same sculpt as other Pullips her lips are painted in such a way to exemplify and exaggerate the shape of her lips.  It’s amazing how much Groove is able to alter the shape of her lips just with paint, the result is it makes her appear to have a large smile and maybe even a bit of a smirk. Her eyes are kind of a dull blue, not as brilliant blue as they had been in the previous release but the color works really nicely with the rest of the face up. Harley Quinn has really dramatic eye makeup, she has a nice smokey eye as well as  gorgeous and well detailed lashes it is truly a pity that her mask covers it all up. Her face is a stark white the crimson lips and dark eye makeup really stand out in stark contrast from her pale complexion. Her eyebrows are a nice shape, they match her wig color well but are kind of unremarkable.

What about the wig? The wig comes already styled into pigtails and the color is a nice pale blonde with black streaks on one side and red on the other side. The quality isn’t remarkable, it is nice and soft though and I like the streaks. Harley Quinn has traditionally had blonde hair but especially in more recent iterations it isn’t exactly unusual for her to have altered her hair color. Her hair has a mixed red and blue appearance in New 52 and she has also had streaks in the Batman Arkham City video game where she had red and black streaks in her pigtails or in the recent Suicide Squad film where her pigtails are streaked red and blue. 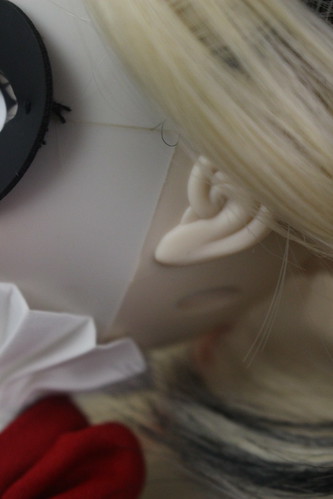 The front or face plate is white while her back plate is the normal Pullip pale. 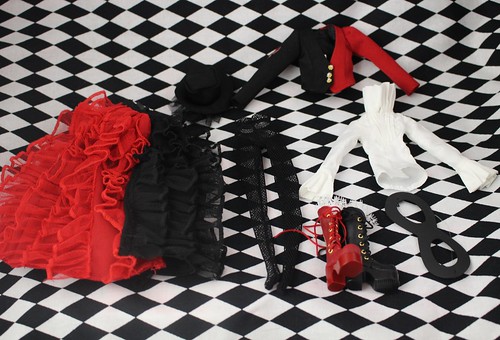 Pullip Harley Quinn Dress Version’s stock consists of a skirt, mismatched boots (one red, one black), a blouse, mask, fishnet tights, a blazer and a hat. The skirt is wired which makes it very dynamic as the wiring enables the skirt to hold position so you can pose a bit. I believe this is the first time that Groove has ever used this particular feature on a Pullip though Volks has been employing this technology for years, for example the skirt of my Dollfie Dream Kan’u is wired as well.

While Harley Quinn’s original design is no doubt the most iconic, her costume has evolved over the years especially in more recent years when her design got revamped for New 52 and she has since received various new costumes. She has also been featured in various video games like Injustice: Gods Among Us and the Arkham series, each video game meant at least a new costume for Harley Quinn then there is her recent appearance in the Suicide Squad film, the point is Harley Quinn’s sense of style is something that is still evolving. There is a really great infographic put together by halloweencostumes.com of some of Harley Quinn’s notable costume changes over the years can be seen here, while the Pullip Harley Quinn Dress Version’s outfit doesn’t seem to be based on a particular comic appearance it still looks like something she would actually wear and that would not be outside of the realm of possibility. 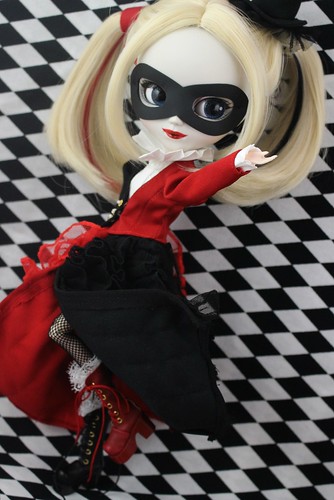 My first thought when I saw Pullip Harley Quinn Dress Version’s outfit is that it was probably what her costume would like if she had been featured in something like elseworlds tale Gotham by Gaslight (granted that particular story was written before the character’s creation). I know some fans were disappointed because the SDCC exclusive Harley Quinn wasn’t based on her appearance in the recent Suicide Squad film but it there is really no shortage of merchandise of that version of Harley Quinn at the moment so I’m personally kind of glad to see something different especially since it seems like that version is already reaching oversaturation very rapidly, I can only imagine how many Suicide Squad Harley Quinns I will be seeing on Halloween in a few weeks. 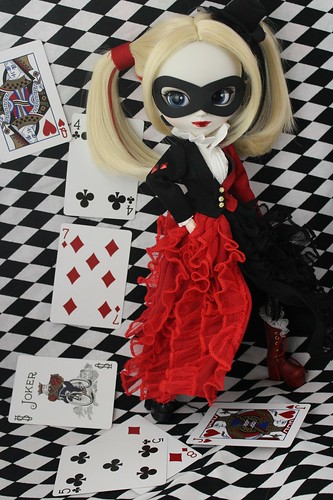 Harley Quinn’s blazer as well as her skirt have her signature diamond shapes on them in small jewel-like applique on them. The diamonds on the skirt tend to get a bit lost in all the ruffles and frills of the skirt. 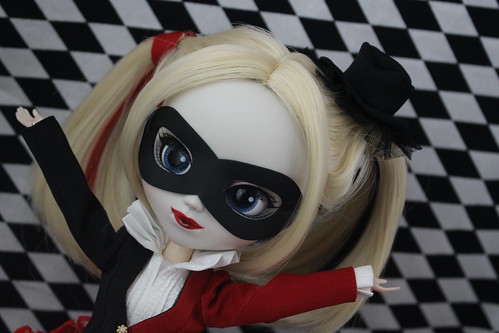 The collar on her white shirt is very reminiscent of the clown ruffle she wears as a part of her iconic outfit, the way the cuffs of her shirt peek out from the blazer kind of remind me of the wrist ruffles. I have no idea if this was an intentional design choice or not but I thought it was a nice touch. 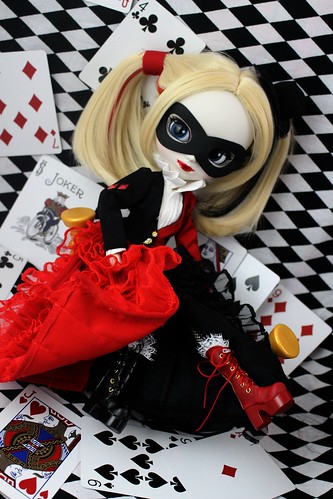 This shot provides a better view of Harley Quinn’s epic stompy boots! They appear to be the same design as Pullip Bloody Red Hood’s boots just in a new more awesome color scheme! 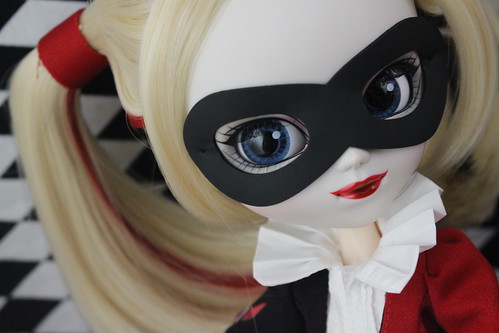 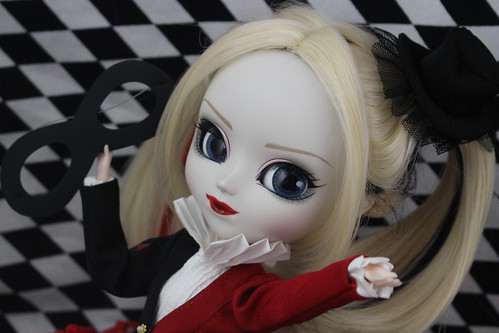 She has such a gorgeous face hiding behind that mask! For anyone curious, her mask is held on with a length of clear elastic so it’s pretty easy to take off and on. Her hat is also held in place with a clear elastic. 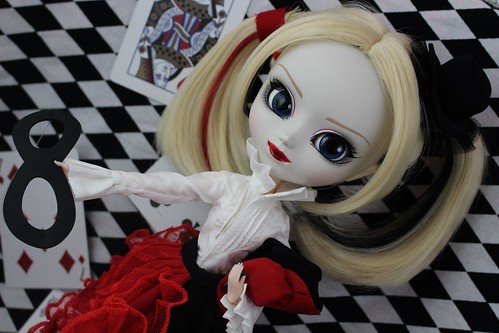 The shirt underneath the blazer has quite a bit of structure to it, I was kind of surprised by how detailed it was considering it is mostly hidden by the blazer. 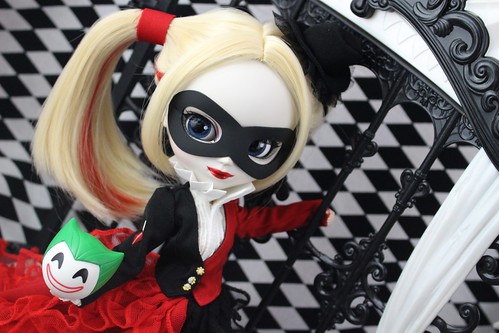 I had a lot of fun photographing Harley Quinn, she really lent herself well to some playful photos plus I have plenty of Joker and Harley Quinn themed props hanging around like the Joker mymoji figure by Funko pictured with Harley Quinn above. 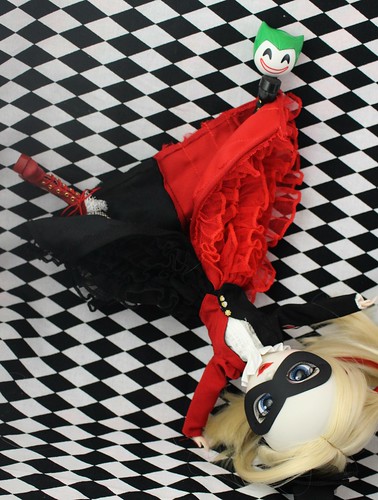 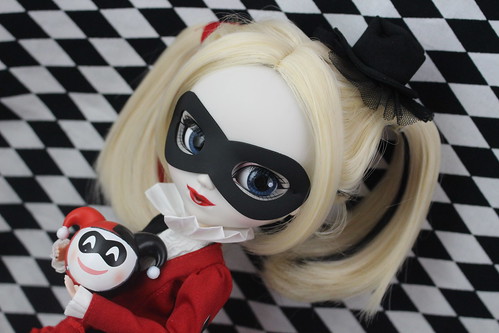 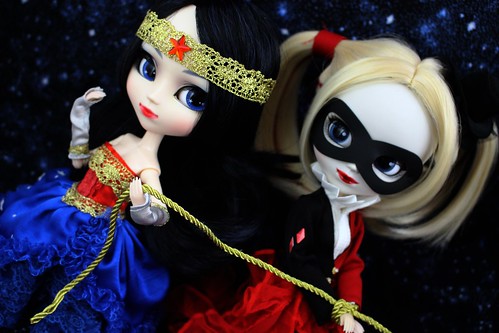 That’s enough clowning around out of you Miss Quinzel, my turn is up next!