A few days ago Groove announced a new soon to be released Pang-ju via their blog. Calf-pang has a MSRP of 10000 yen and is set for a January release (February for us here in the states). As the name suggests Calf-pang has a cow theme. 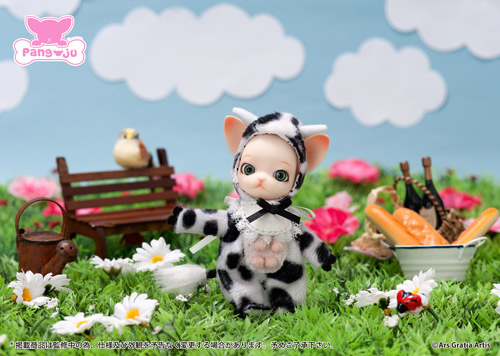 What is a Pang-ju? A Pang-ju is a small anthro Chihuahua bjd made by Groove, they are not made out of resin so they are off-topic on Den of Angels but are absurdly adorable. Not only are they absurdly adorable they are fairly inexpensive Pullipstyle has them all priced for under $100 and that includes outfit/face up. I previously reviewed Cranberry-pang here for anyone curious. We haven’t seen a new Pang-ju release since June’s Flower-pang so I am very happy to see another one on the release schedule finally. 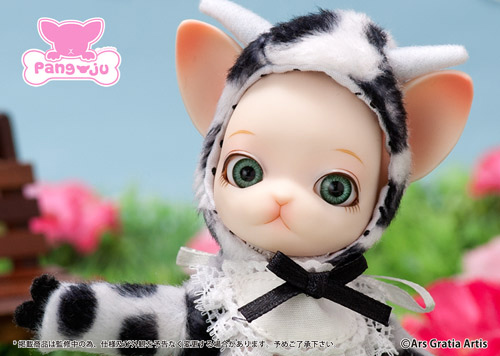 I was initially kind of taken a back by Calf-pang because I did not think cows could have both horns and udders, I had never really given the matter much thought before but I wrongly assumed that only boy cows/bulls had horns. Mr. Klein is a farm boy so he was able to shed some light on the subject, there are apparently many breeds of cows some do not have horns at all such as Angus while others are born with horns but most of the time have them removed a few days after birth. Why do they remove the horns? It makes it safer to work with/handle the cows and it makes transportation easier as well. It isn’t every day I learn something new because of dolls, I will say be very glad I’m just giving you the cliff-notes Mr. Klein rattled on about cows for over two hours. 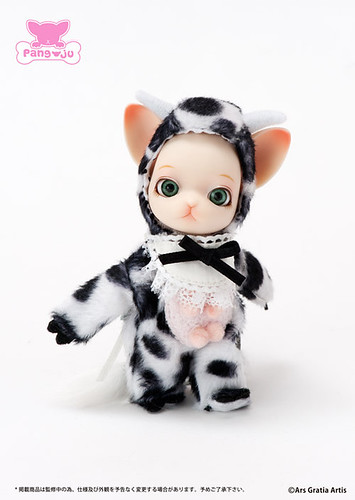 Calf-pang is so absurd that it’s actually sort of adorable, just look at those udders >_< . I’ve been looking for a second Pang-ju this one isn’t quite right for me (it’s between the equally absurd Flower-pang and the jester Pome-pang for me) I am very happy to see another being released. I look forward to seeing owner photos of this one.

Like Loading...
This entry was posted in Announced, Doll, Pang-ju and tagged anthro bjd, BJD, groove, pang-ju. Bookmark the permalink.