Pang-ju is a tiny anthro bjd made by Groove, they are a mere 10 cm tall. Groove introduced the first Pang-ju in August of 2011 and they have been sporadically released ever since. So far a total of thirteen different Pang-ju have been released including the just released Chiffon Cake-pang (a complete release list can be seen here).

I will admit that I have been curious about Pang-ju for a while but I wasn’t convinced that I absolutely needed one. There were never very many owner photos of Pang-ju to tempt me unfortunately a video had to come along. Last year, a promotional video was posted by Ars Gratia Artis to promote Pang-ju.

Unfortunately for me, they knew me weakness look at that cute little puppy frolic and those dog dolls in the video are actually sort of cute… oh, yes I was doomed I definitely had to have one of those adorable little dog dolls now.

After months of toying with the idea of buying a Pang-ju and trying to decide which one I should get if I get one, I finally made a decision and bought Cranberry-Pang. I was very torn between Cranberry-Pang and Pome-Pang, I love jesters and I already have Dal Sentimental Noon and Ai Doll Red Poppy which would have matched Pome-Pang perfectly.  I ultimately decided to go with Cranberry-Pang because she was more traditionally cute and would be more versatile versus Pome-Pang’s more extreme face up. 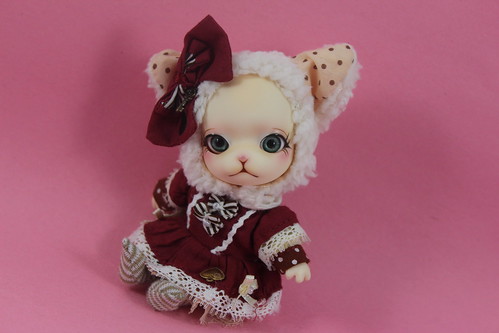 How tiny, how sweet.

I have to say that I was was pleasantly surprised by Pang-ju when I deboxed her, I had assumed from my experience with Ai Dolls that their posing would  be kind of clunky but despite Pang-ju’s tiny size she seemed to be pose better for me than the Ai Dolls ever did. I was completely blown away by how tiny Pang-ju really is in person, I had known her measurements but somehow I didn’t expect her to be so petite. She was also light as a feather, though that could be because Pang-ju are made of ABS plastic. Because Pang-ju are not resin they unfortunately don’t meet the criteria for being an on-topic doll on Den of Angels. 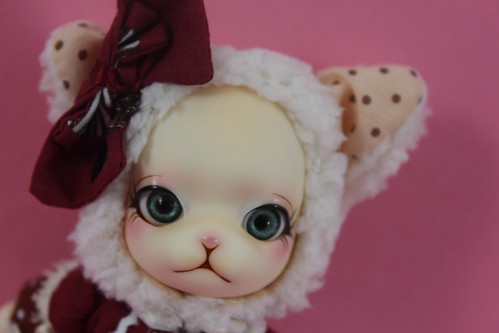 Cranberry-pang with a custom Dal, since they were wearing similar colors I decided to take a picture of the pair together.

I’ll write more about Pang-ju soon, I hope to get some additional size comparison shots and as well as more photos in general of her.