Earlier this year, I was pleasantly surprised to see Yeolume return as a part of the Doll Collection line. Doll Collection Miku was released in March of this year with a MSRP of 12000 yen she is currently available for purchase via Groove’s official store in Japan as well as JPGroove (my understanding is only a small amount was brought to the US due to Covid-19 related shipping complications so they will not be offering to other retailers like Pullipstyle). I received her soon after her release date way back in spring but somehow never got around to sharing pictures of her here an oversight that I intend to remedy… 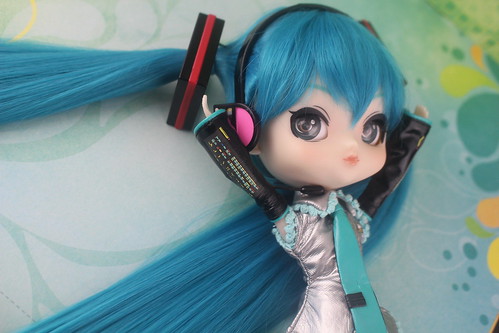 Let’s back this up a little bit first…. I used some terms that may be unfamiliar to new fans of Pullip and/or older fans just getting back into Pullip. What is the Doll Collection line? The Doll Collection line is a collaboration series of dolls done in the style of different Pullip family members, most famously perhaps with Disney a few years back which gave us a Pullip-style Cinderella, a Pullip-style Belle and a Taeyang-line Beast/Adam doll based on the characters from the classic Disney films. Who or what is Yeolume? Yeolume is Pullip’s daughter from the future, unlike other dolls in the Pullip family line she has a bendy body more similar to Blythe or Licca; I made a  body comparison post when she was first released for those curious that can be seen here . Only two Yeolume models were released (Podo and Blackberry) before the line went on hiatus for years. Unfortunately, Yeolume’s initial reception in the doll community was lukewarm with many people citing the body as the reason they were a bit hesitant about Yeolume as it was just so different from the other Pullip family member bodies but over the years her popularity has exploded. I’m happy that Yeolume has finally made her triumphant return and that Doll Collection Yeolume Miku was the first of many new Yeolume, AGA released a limited edition original design Buttzi just a few months ago and Miku will be joined by Doll Collection Yeolume versions of Asuka and Rei early next year. This year has certainly turned into a renaissance of sorts for Yeolume, in general 2020 has been a strong year for Groove doll releases (though not without an occassional misstep poor canceled Pullip release Sowrene). 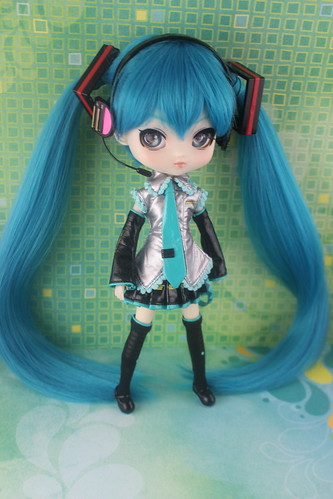 Miku is a virtual character/voicebank set created for use in the Vocaloid software by Crypton Future Media, the character has proved endearingly popular, so popular in fact that there have Miku concerts, festivals and merchandise; a maddening amount of merchandise. Miku has been in 100s of different styles or interpretations over the years including several different Pullip releases as well as featured in several other doll lines such as Licca and Volks Dollfie Dream. The original version of Pullip Miku was released nearly ten years ago and is still one of the most popular Pullip releases, so a Yeolume interpretation of the character was a great idea! 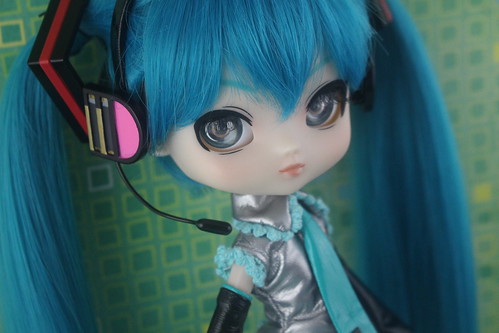 I really think that the stylized anime type face up really suits Yeolume’s features nicely, I especially love her eye make up and I think the eye chips are really striking! I also liked her somewhat neutral lip. I was pleasantly surprised by her wig which I found to be very soft and silky. 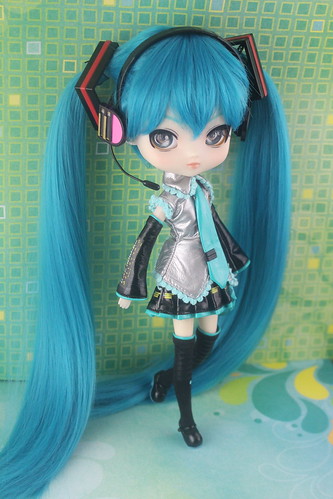 Regarding Miku’s outfit, I’m still not the biggest fan of the vinyl material used for her outfit but it somehow does make her outfit look very retro futuristic (like someone’s idea of what the future of fashion would look like in the 1960’s) so it does kind of work for her outfit. There is one really interesting design change from the Pullip version Miku’s outfit she doesn’t have boots, she has thigh high socks and shoes instead. If you weren’t looking that closely, it wouldn’t be that noticeable that she has socks/shoes versus boots but I feel like this is a step in the right direction as I’m guessing the boots were probably not that easy to make at this scale plus likely to be the most fragile piece of her stock outfit especially with the vinyl-like material having to flex over the knee. Miku’s headphones and hair accessories are made from plastic, the hair accessories attach via affixed bobby pins. 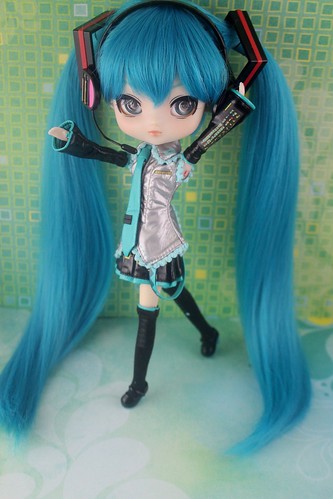 I know a lot of people have had issues with Yeolume’s body, while I recognize that it is very different from Pullip and friends normal type of bodies I do have a small collection of Blythe so I’m not entirely unfamiliar with the limited poseability that comes with a body with limited joints. I feel like I was still able to get a fair number of different Miku-like poses out of her. It is definitely something different to get used to but the Yeolume body isn’t a dealbreaker for me, if it’s too different for your own personal taste I will say that I have seen many successful Yeolume/obitsu hybrids. 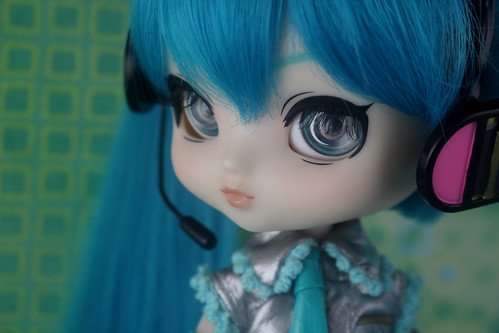 I am very happy to see Yeolume return in some form after a very long absence, I can’t wait for Doll Collection Asuka and Rei to be released next year! 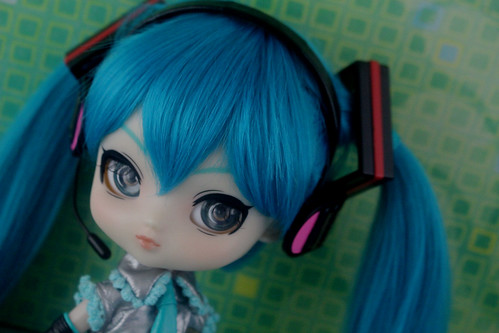 If you find yourself wanting your own Doll Collection Miku she can be purchased at JPGroove and/or Groove’s International Site.