It has been a long time since the last Dal was released, the most recent Dal release had been Dal Manuel way back in October 2018 that is until Dal Pixie was recently released. I’ve been struggling to find a starting point to posting more regularly here again, it’s been a long time since I have posted a review I thought that the first new Dal release in over a year seemed to be as good an excuse for a post so here goes… 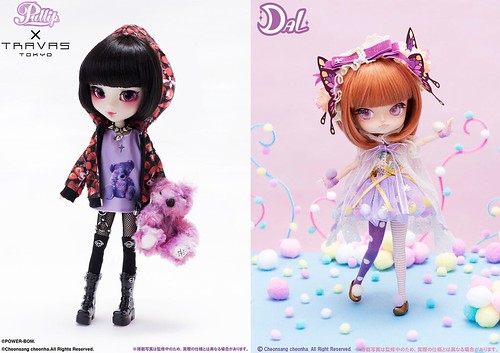 Dal Pixie was released alongside Pullip noan in February in Japan, March here in the US she has a MSRP of 20000 yen or approximately $184.49 as of this writing. When the dolls were originally announced, Pullip noan was an instant favorite for me as her stock outfit is definitely something not that far away from my own style aesthetic but I always thought that Dal Pixie was cute. Both dolls arrived from Pullipstyle a little more than a week ago, what I hadn’t anticipated was how much I would fall in love with Pixie once I had her in my hands so I ended up opening her first (noan is amazing too but Pixie was unexpected delight). 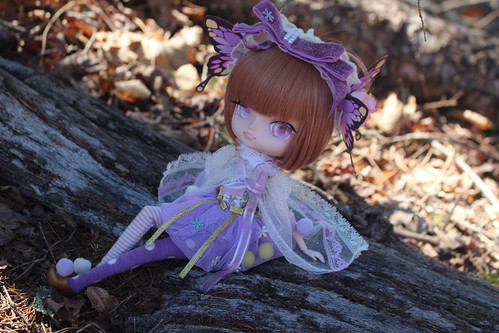 Dal Pixie in the box, in addition to the standard stand (this time in a lovely shade of light) and card she also comes with what I am going to call a butterfly headdress. I wasn’t sure what to expect in terms of quality regarding the butterfly headdress but I was impressed with it and it’s quality definitely not something I anticipate falling apart on me. The only other thing I would have maybe have included with Dal Pixie is maybe a wand? Somehow it just seems like she needs a little fairy wand with a ribbon attached to it.

A couple of quick observations- well first, oh my goodness she’s absolutely adorable! I really love her wig, though I struggle to put a name to the color (maybe strawberry blonde ?) the style and color work nicely for her while I normally love fantasy colored wigs I think the contrast of the wig color kept her from being too overloaded with the pastel color palette. The wig itself is soft and seems to be nice quality. 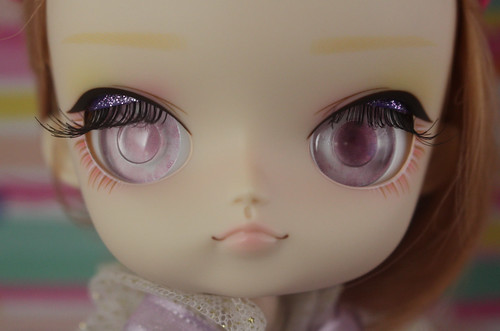 Dal Pixie’s face up has an almost unearthly beauty to it, her face up is very pastel colored
done in shades of pink and white but her shiny eyes and eyelids really set her apart.  I was pleasantly surprised by her eyelids which are purple and sparkly. Dals can’t close their eyes but they do have a small bit of visible eyelid I didn’t really notice them that much in the promotional images but I think they really suit her and make her face up pop! The eye chips have been a bit of a divisive factor in the doll community, some people love them for adding to her ethereal charm others don’t care for them at all. I was originally somewhat hesitant about the chips myself but I ended up really liking them in person, I understand why others may not care for them but please remember that eye chips are easily changeable. 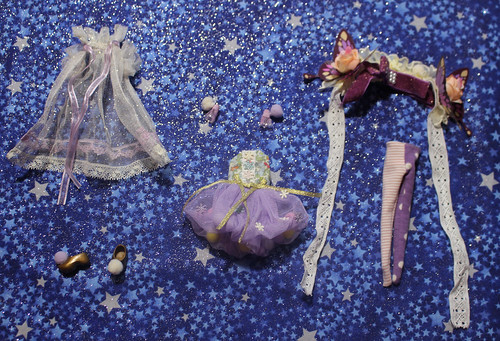 Dal Pixie’s stock outfit consists of a dress, cardigan, clogs with attached pompoms, tights, a butterfly headdress and two pompom arm accessories. The dress has a kind of balloon skirt with small multi-colored pompoms that float freely within the tulle, this style of dress is a popular style with dolls right now as it’s very whimsical and definitely seems to fit Pixie’s almost ethereal aesthetic. I think the mismatched tights are a fun detail though I must admit a bit to my embarassment that it seems I may have put the tights back on Dal Pixie backwards at one point because they are flipped in some of my photos of her ^^; . The clogs with mismatched pompoms are another fun, whimsical touch. I love how the cardigan has an almost intangible quality to it, it just seems so light and dainty. And the headdress… 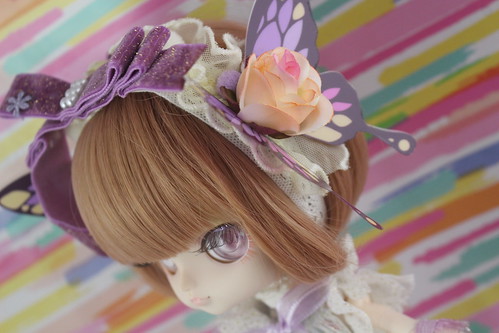 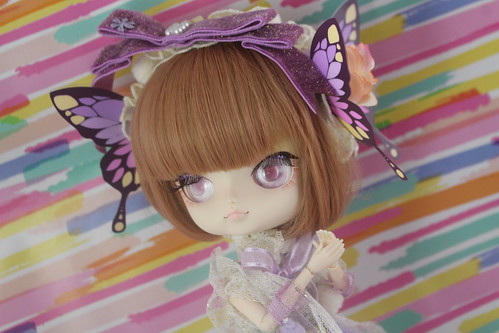 Aww, my heart Dal Pixie you have definitely stolen it! 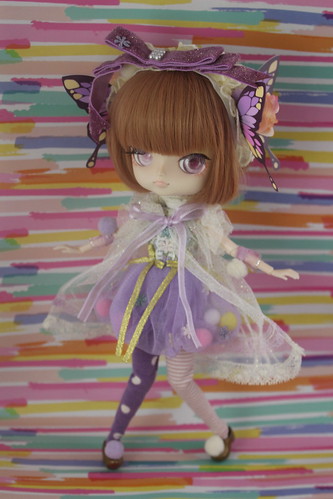 I honestly didn’t expect to like Dal Pixie as much as I do, she is quite captivating I can’t get over what a surprising delight she ended up being. 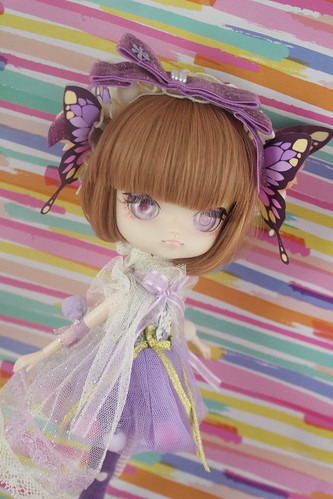 Such an enchanting little darling! I love how cardigan and dress almost seem to float. 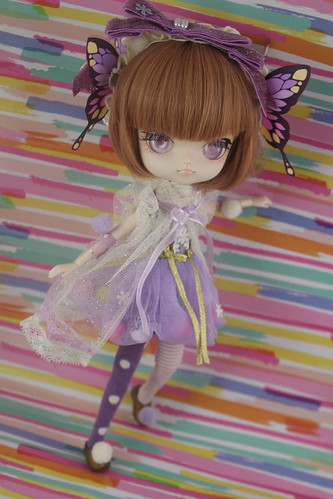 Dal Pixie has a very sweet fairy design but I am somewhat torn on whether she is actually supposed to be a fairy or if she is perhaps a fanciful little girl dressed up like how she thinks a fairy would look. Traditionally fairies are depicted with wings, Dal Pixie doesn’t have wings besides the one’s on her butterfly headdress. I think her outfit kind of plays into this theory a little too… I love how her outfit is put together, it doesn’t match perfectly but that keeps the oufit from being an indiscernable pastel overload it also kind of looks like perhaps she has raided her trunk of dress up and put together the best fairy outfit that she could. The outfit works for her though and I think that it’s slightly mismatched nature has endeared her more to me, it makes her more interesting!

I look forward to the upcoming release of Pullip Eirene to go alongside my Dal Pixie, aren’t they just the perfect pair? I must admit I think Pixie is my favorite of the two right now but we shall see once Pullip Eirene gets released. Is it wrong of me to hope that an Isul eventually gets released as a part of this set? Though I guess we do already have an Isul with a fairy theme Fairy Lumiere from the Cinderella series.

Please see my flickr for more photos of Dal Pixie, if you find yourself in need of a delightful little fairy to add to your own doll family after reading this review she is available for purchase via Pullipstyle and/or JPGroove. Please remember that Pullipstyle and JPGroove themselves are both small businesses, I know a lot of people (and small businesses) are struggling right now but if you are able to please support them! 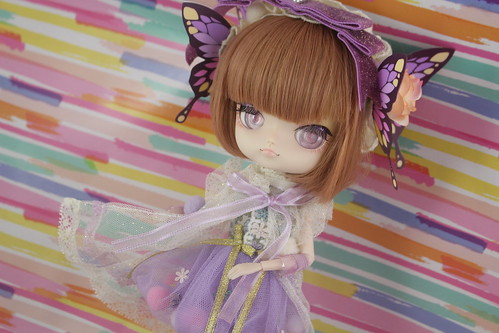 I’m hoping to make posting here again a more regular thing again especially right now since we are under a “stay at home” order but that doesn’t always translate to my having free time to focus on much of anything for very long. Maybe next time, a Pullip Claudia review? Let me know what you think in the comments.