Some rather unexpected news has caused me to break my relative silence here; while I’ve still been around doing updates on pages etc but haven’t posted an update or review in months but this was something so exciting I had to share as soon as possible. Groove has announced a new Yeolume for the first time in several, while technically speaking she belongs to a line called Doll Collection which will be a line of collaboration dolls and this release at least will be in the style of Yeolume.

Of course, mega-popular Vocaloid character Miku seems like the obvious choice for the first entry in this new collaboration series even though there is already multiple different variations of Pullip Miku and even a DoColla Little Pullip + version of Miku it just seems like a safe choice.

For those of you unfamiliar with Yeolume she is Pullip’s daughter from the future. She’s kind of a strange case because unlike the other dolls in the Pullip family, Ars Gratia Artis retained full rights to her and Groove had limited involvement with her previous release.  Only two models of her were released originally and though her intitial reception within the doll community was kind of lukewarm due to her body being more similar to Blythe than the more articulated Pullip despite this she has definitely become a favorite of the community since then (body comparison featuring Yeolume can be seen here). 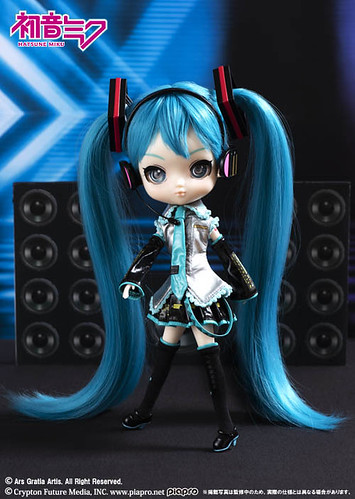 Concept Based on the groove’s original doll (Yeolume), it is a new product “collection doll” developed with all collaborations based on the concept of “clothes figures”. Hair is wig. The neck (left and right), shoulders (front and back), waist (left and right), and legs (front and back) are movable, and the knees are also bendable. The pupil is also a doll eye that can move left and right, so you can add a little pose or expression. You can also arrange hair, so find your own expression and take the best shot! It is a product that you can play. The total length is about 27cm and it is easy to collect.

Doll Collection Miku will be released in March in Japan (April here in the US) and will have a MSRP of 12,000 yen.

Groove teases that the second title has already been decided and it’ll based on “the 25th anniversary of this year, it is a super-sci-fi animation that will release a new movie.” AGA has also been teasing photos of a non-collaboration Yeolume with a unicorn theme on their various social media pages so perhaps there is some hope that the Yeolume will also continue in a non-collaboration series at least in a limited fashion as well.

Like Loading...
This entry was posted in Doll, Pullip and tagged doll collection, miku, vocaloid, yeolume. Bookmark the permalink.