….and just as I published Pullip Eileen’s announcement I realized that I never actually wrote up Pullip Cinnamoroll here, I had meant to especially since I really love her release I’ve just been so distracted lately by everything else going on. Seriously I am so sorry for delay on this write up to expedite, I’m going to keep this kind of brief.

Pullip x Cinnamoroll 15th Anniversary Edition was announced well a while ago now via Groove’s blog. She is to be released in March in Japan and one month later here in the US, her MSRP is 22,000 yen which is about $200.87 as of this writing and because I took so bloody long to get this written up she is already available for preorder via Pullipstyle for $175…. and yes I already preordered her! I’m calling it now she is going to end up being one of this year’s IT girls though honestly all three of the announced releases for this year so far have been pretty strong.

Pullip and Sanrio are no strangers to one another, in 2008 Jun Planning (the company that preceded Groove) collaborated with Sanrio for the first time Pullip Hello Kitty, Pullip My Melody and Dal Cinnamoroll. In 2012, Groove released a new version of Dal Cinnamoroll to celebrate Cinnamoroll’s 10th anniversary. More recently a Hello Kitty x Tokidoki collaboration Pullip Violetta and a new version of Pullip My Melody x Hen-nako were released. Dal Cinnamoroll was one of the most popular and beloved Dal releases so I was not surprised when a new version of the Dal was released and now a new Pullip version as well! At first I had kind of mixed feelings about Cinnamoroll’s new interpretation being a Pullip versus a Dal but the Pullip is so darn cute that I can’t be mad at it. 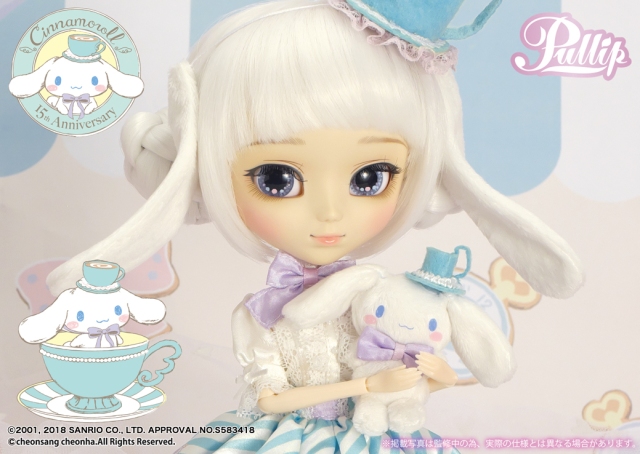 As cute as the Dal release is animal costumes have become kind of hit or miss popularity-wise so the stylized interpretation of the Pullip is much more of a modern take on the character which is still very much recognizable. I absolutely adore her little teacup hat and her little Cinnamoroll companion plushie that matches her outfit perfectly! 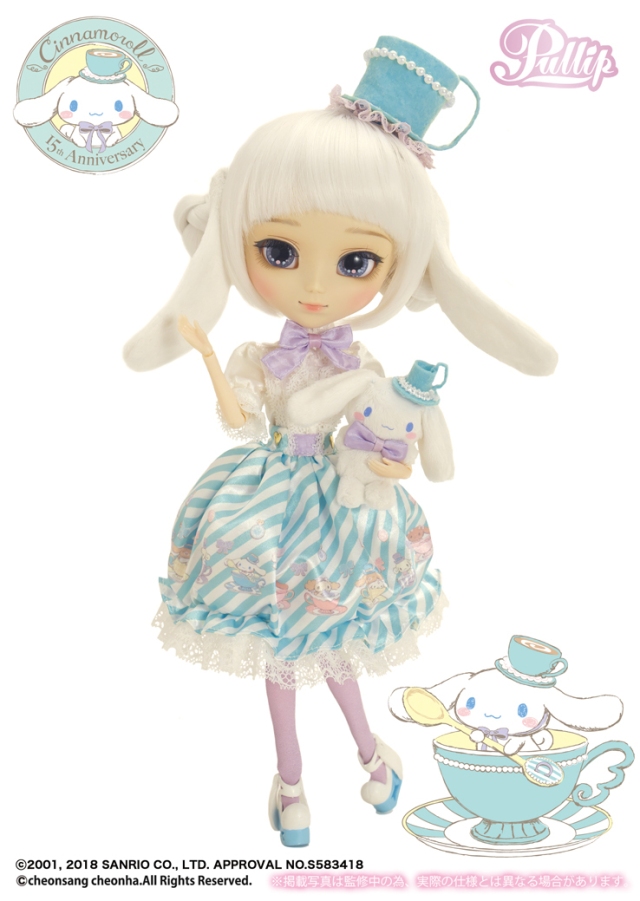 I adore Cinnamoroll’s outfit, the color scheme and just everything is absolutely perfect! I love the Cinnamoroll print at the hemline of her skirt, it’s a nice little touch. I love her shoes, at first glance I kind of questioned the shoe covers and then I realized that they are like Cinnamoroll’s precious little ears. I much prefer the removable Cinnamoroll ears over a giant Cinnamoroll hood, the Hello Kitty head on the original Pullip was a bit overkill so I am glad Groove did not go that route on the Cinnamoroll Pullip.

Such a pretty face up! I love how blushy she is, her subtle pink lipstick and nicely detailed eye make up. I love the detailing on her lavender eye chips.