Today as another snowstorm strikes, I decided that what I needed to do was to focus on something really bright and colorful in effort to bring some cheer to an otherwise dreary day. My intention had been to write about Dal Alpin next but she is more of a winter themed doll and considering it has snowed here for the last four days in a row, I’ve had my fill of winter at the moment so as fantasies of spring dance in my head Pullip veryBerryPOP will be featured here today instead.

Pullip veryBerryPOP was released in June of 2016, she had a MSRP of 18,000 yen. She kind of stood out to me because she was one of the rare releases last year that was not a collaboration, a recolored version of a previous release or part of the Creator’s Label line she was an original release and a bit unique because of that. Her name veryBerryPOP is also quite unique with it’s odd capitalizations, I think it suits her though as I can totally picture her in my head introducing herself with unbridled enthusiasm really emphasizing the POP at the end of her name.

I’ve been very interested in veryBerryPOP ever since she announced but for one reason or another I hadn’t purchased her yet, a contributing factor was that there were a lot of great doll releases last year and only so much paycheck to go around especially since I do have collecting interests outside of Pullip as well. I pounced on the opportunity to get veryBerryPOP when I saw that she was featured as part of JPGroove‘s recent Sample Sale. For those of you aren’t familiar with their Sample Sales the dolls featured as a part of the sale are dolls previously used for display so they don’t come with their stands/boxes/cards and they may have little issues or be missing some accessories but they are generally priced very reasonably. VeryBerryPOP arrived a few weeks ago in wonderful condition and I believe she even came with all of her stock items, I’m very happy I had the chance to add her to my  collection as she is just the little ray of sunshine I needed today! 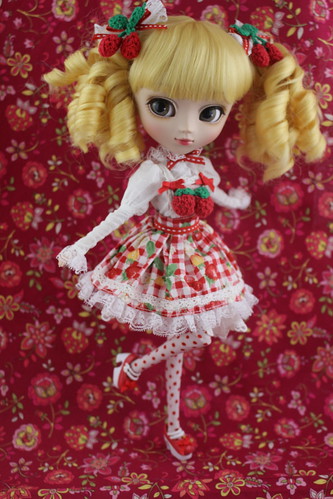 A bright Red Berry and full lace are sign of cuteness…. Am I Sweetest?….. Feel Like So.
Pullip veryBerryPOP was purchased via one of JPGroove’s sample sales which it offered me the chance to get her more quickly than I may have been able to otherwise but it also  means I unfortunately do not have box photos of veryBerryPOP to share. For anyone curious, she would normally come with a white plastic stand as well as a card those are the only items I believe that I did not receive with my veryBerryPOP. 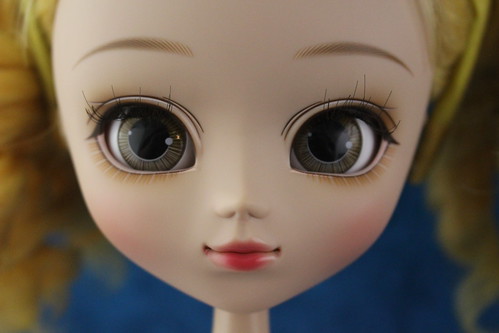 The thing that really caught my attention and stood out for me about Pullip veryBerryPOP ever since she was announced was her lips, they struck me as being quite similar to those of Pullip Papin who is my favorite Pullip release so I am definitely not complaining about the similarity (close up of Papin highlighting her lips here). I absolutely love her lips they look like she just got done putting lipgloss on, they are just a very juicy red. Overall I think she has a really nice face up, in addition to her lips which I have already expressed fondness for other highlights include the rosy blushing on her cheeks as well as her delicate and feminine eye makeup done in black as well as a pale almost golden brown. While I like the shape and the style of her eyebrows, I think I would have preferred it if they were a little bit of a lighter shade of brown they just seem too dark. Her eyechips suit her well enough but I think I would have preferred bright green eye chips in her, I think that would have really made her face up pop that much more (I may rechip her in green eventually).

Also of note, Pullip veryBerryPOP has a little bit of a darker skin tone than the average Pullip. I know it may not look like she has a bit of a tan but Pullip generally redefines the term pale, I consider her to have a healthy glow and it’s noticeable when she is next to other recent releases like Lupinus on the shelf. She would probably be considered somewhere between white and natural obitsu skin tones similar to Pullip Papin. 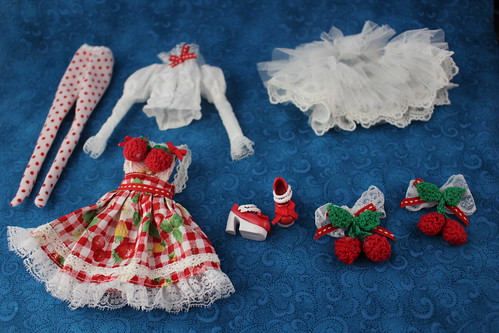 Pullip veryBerryPOP’s stock outfit consists of a white blouse with lace detailing at the cuffs and collar as well as a red ribbon bow-tie, a jumper dress with more lace detailing and knitted cherry accessories, a petticoat to fluff out the jumper, hair accessories that combine the lace elements along with the red ribbon and the knitted cherry accessories similar to those seen are on her dress, white tights with red polka dots as well as red and white shoes. I love the print of the dress it’s very whimsical, it is playful as well as vibrant with cherries over a red gingham print. The colors are great, very bright and the white lace detailing just seems to make the colors pop more. I love the contrast of prints between the gingham print of the dress and the polka dotted tights, the two prints are so discoordinate they should really clash but somehow it just works. I know a lot of people weren’t fans of the cherry embellishments on her dress and hair accessories but to me they add a little bit of a homespun charm to her outfit (maybe she added them to the outfit herself to set her apart from anyone else with this outfit?) and further exemplifies the youthful and playful nature of her outfit so I don’t really see them as a negative. 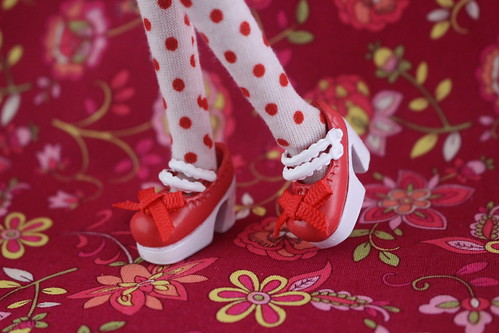 I bet you thought I forgot to mention the shoes above, they are so adorable I felt they merited a close up to highlight them. This is one of my favorite shoe molds that Groove has used over the years and I believe that they were well chosen as they suit the outfit beautifully. I love the added detail of the red ribbon bow, it’s just that little bit of an extra touch that really makes them perfect for veryBerryPOP. 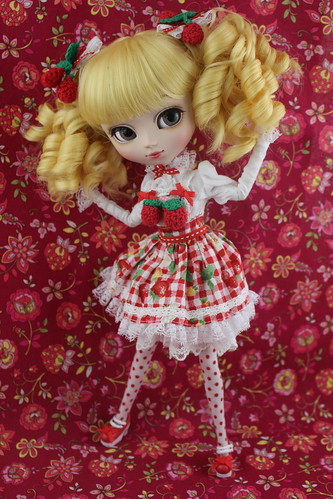 Let’s talk about the wig, Pullip veryBerryPOP has spiral curls pulled back into twintails. When I see a doll with curls my heart kind of sinks with dread, curls can be tricky to maintain and the more you handle the doll the messier the curls tend to get (the secret to maintaining the curls is not to touch them!). Despite my dread fear of the curls I’m happy to report that veryBerryPop’s curls have maintained their shape really well with minimal flyaway tresses trying to make their escape. I love the bright almost lemony yellow color of veryBerryPOP’s wig, I think the color was a good choice for her and really brings her look together nicely. The quality of the wig fiber is very soft and silky, my only complaint about the wig is the bangs. I vastly prefer dolls that have bangs versus those that do not but I feel like these bangs almost start to far back on on her head, it probably wouldn’t be as noticeable if her hair wasn’t tied back into twintails or maybe if she had a more traditional type of headdress versus the hair accessories. 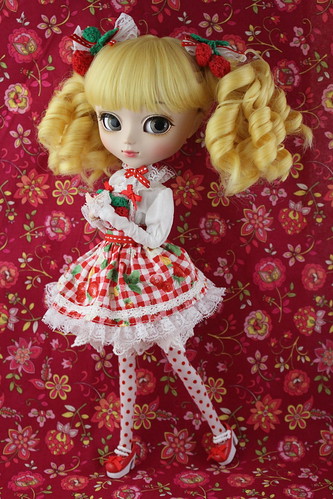 Other than drooling over pictures of all the gorgeous dresses and coordinates, I’m not really that knowledgeable about Lolita clothing but I believe veryBerryPOP’s outfit may qualify as Country Lolita. I’m not that familiar with all of the different Lolita clothing subtypes but the simple style and gingham print make me think of Country Lolita, please  anyone more knowledgeable than myself about Lolita correct me if I am incorrect in this assumption. 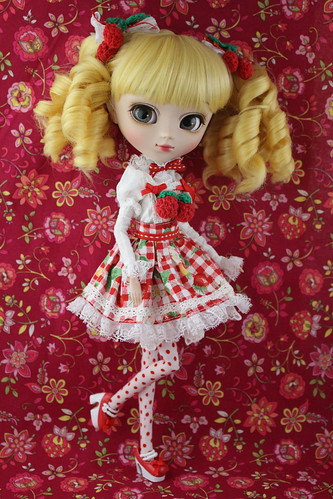 Sometimes this kind of clothing style can veer into the overly sweet territory, where I almost feel like I am going to get cavities just looking at it as it is just toooo sweet. Some dolls like Pullip Sfoglia definitely approach that threshold for me but I think that veryBerryPOP’s color scheme really helps set her apart and keeps her from being too sweet. Yes, she is a very sweet girl with her lace but she is also a little sour with the red gingham print offset with the green details of her outfit and those cheeky polka-dot tights just really make the whole outfit pop! 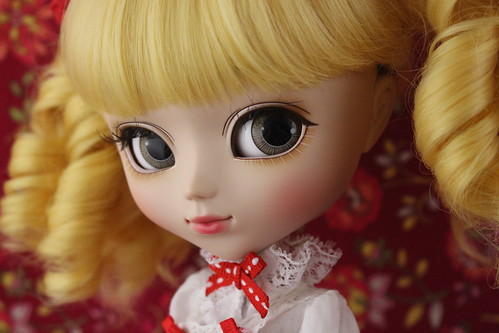 VeryBerryPOP has such a beautiful face. 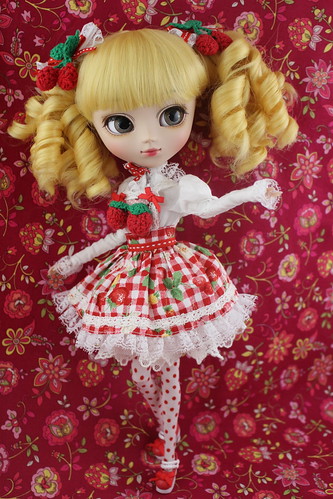 When I proudly showed off  veryBerryPOP to Mr.Klein when she first arrived he was quite curious about the little cherry accessories. He thought that she was some type of fruit themed magical girl from some unknown anime and that obviously the cherries must be the source of her power. He seemed kind of disappointed when I explained that she was not just an original design and not from some magical girl anime, I’m not going to lie I would totally watch that show though if it existed and I do think that she could definitely pass for a magical girl. 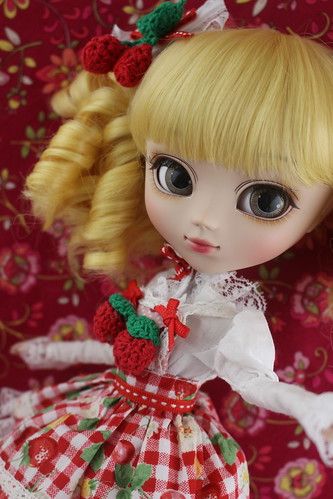 Pullip veryBerryPOP is such a bright and cheery girl, I can’t help but smile when I look at her. She was definitely the doll I needed to take some time to play with on such a gloomy day, maybe she is really a magical girl after all with the power to bring joy to everyone! 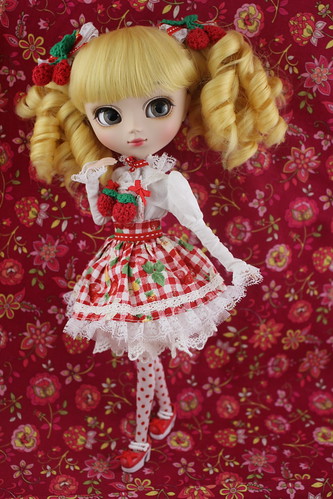 There are more pictures of Pullip veryBerryPOP that can be seen on my flickr for anyone interested. Pullip veryBerryPOP is available to be purchased via JPGroove and/or Pullipstyle. I’d like to give an additional little acknowledgment to JPGroove for offering these periodic Sample Sales as they are such a wonderful opportunity to add dolls to your collection at a great price, I know I’ve been able to get some dolls via the Sample Sale I may not have been able to anytime soon otherwise. 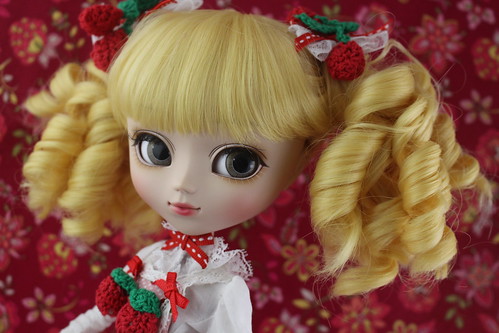