The memory chip in my camera recently developed issues, it was a bit frustrating but I knew that surely I must have had a spare memory chip somewhere. I did eventually find an old memory chip and much to my surprise it had a bunch of photos on it that I had never uploaded, the photos had been taken immediately before my car accident last year. Among the photos on the memory chip were some photos of Dal Silane, she had been my newest arrival before the car accident. Most of these pictures had kind of gotten lost in the shuffle and Silane never properly got a chance to shine.

I remember when Dal Silane was first announced all I could think of was how much of a sugary sweet confection she was. Dal Silane was released in May of 2014. Only two Dals were released in 2014, Silane and Tokidoki Dal Vendettina the two of which could not be more different than day and night the sweet lolita Silane and the dark edgy Vendettina. There is such a stark difference between the two Dals, Silane was designed to be a very safe release with broad appeal while Vendettina was much more of a risky release they counterbalance each other well. I’m glad that Dal has since made a regular return to release schedule since the dark, mostly Dal-free days of 2014 and that we are seeing a variety of releases.  Dal Silane had a MSRP of 15000 yen at the time of release. I purchased my Dal Silane from Pullipstyle in late April of last year. 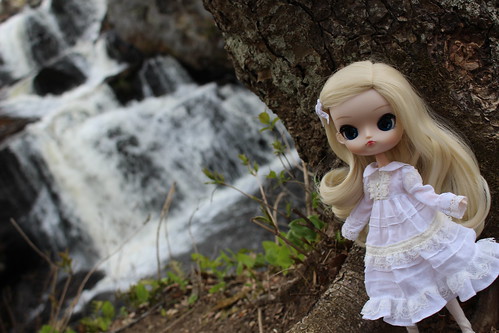 I am off to the tea room with my mom… Wearing a soft, white outfit…
I am a proper Lady!!

Dal Silane in the box. 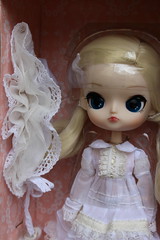 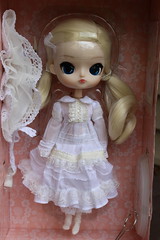 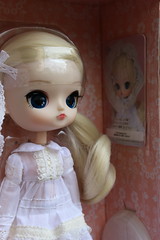 First impressions of Dal Silane in the box, wow for her stock being off-white it looks very bright and pristine and her skin almost seems to having a glowing quality to it. Her bonnet and shoes are secured to the side of the box and she of course, comes with the standard plastic stand (white) and card.

Blond hair and blue eyes has been a surprisingly popular design choice for Dal over the years, of the last five Dal designs released three of them had some variation of blond hair/blue eyes (Dal ha-ha, Dal Deneb and Dal Dana) while Dal Alpin and Dal Quince had darker color schemes. Speaking of Silane’s wig, how is the quality? I am delighted to report that is very soft and silky, I love the gentle curl that is has. 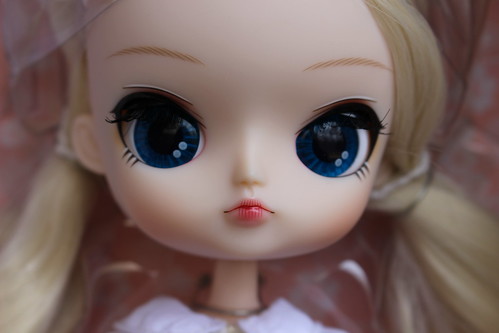 In more recent years, Pullip and friends have moved more towards bjd-esque face ups but Silane reminds me more of earlier releases. Silane has a nice face up with stylized eye makeup, minimal peach blushing and quite unusual lips. Silane’s lips are lined red but only towards the center, the outer edges of her lips are almost nude this quite an unusual design on a Dal though I must say that I quite like it! In comparison to the rest of Silane, her eye makeup is quite dark the black of the eye makeup brings some nice contrast to her face up. Her eyebrows are a nice shape and the color compliments her  well. I love her brilliant blue eyechips and they catch the light really nicely and make her seem a bit animated. 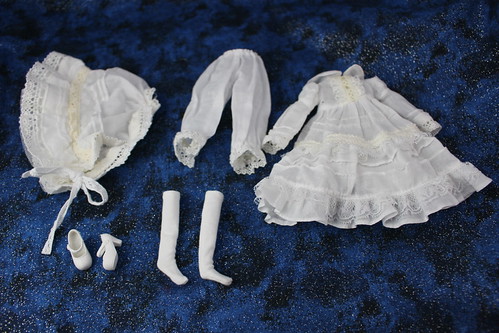 Dal Silane’s stock outfit consists of a dress, bonnet, bloomers, socks and shoes. Although her stock outfit looks like a pristine white all of it is ever so slightly off-white in color. I think that Silane could have potentially been a stronger release if her dress and bonnet had some color to it, the all off-white is nice but can you imagine her dress in a pale seafoam green with the off-white lace/detailing? I think a color scheme with slightly more color would have set Silane apart from other Dals that much more.

The quality of Silane’s stock is reasonably nice though her dress is a bit on the sheer side. While the overall design of Silane’s dress is a bit on the simple side it is beautifully adorned with lace which elevates the design and keeps her dress from being too plain. Her bonnet with it’s frills and lace seem to frame her face in such a way that it makes me think of her face as a flower and the bonnet as petals. I appreciate that Silane came with a proper set of bloomers sometimes Groove omits underwear, they are dolls so they actually need underwear and it never seems to bother me when Pullip does not come with underwear but on Dal it seems like a bit more of a glaring omission when she doesn’t come with any. Silane’s socks are kind of unremarkable, they are white knee high socks. Her shoes are one of my favorite shoe molds that has been used for Dal, they are a simple design but they suit her beautifully and they fit her really nicely as well (sometimes Dal’s shoes are a bit too big/loose). 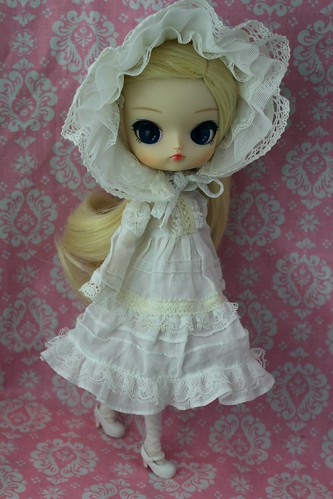 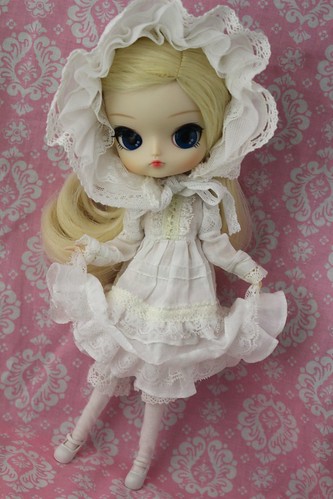 Dal Silane is a prim and proper lady! 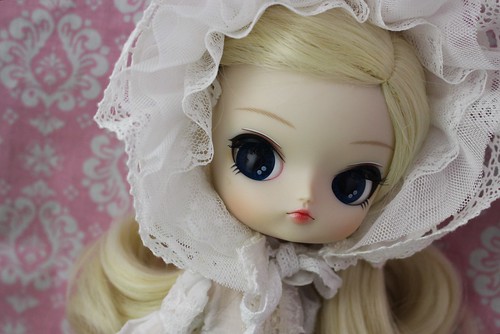 Dal Silane dangerously close to the edge of almost being too sweet but I think she just manages to safely straddle that line successfully. 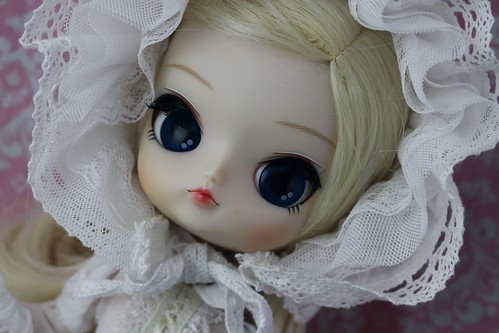 She really does remind me of a flower when she has the bonnet on, the varying layers of lace are reminiscent of petals stretching outwards and framing her face. 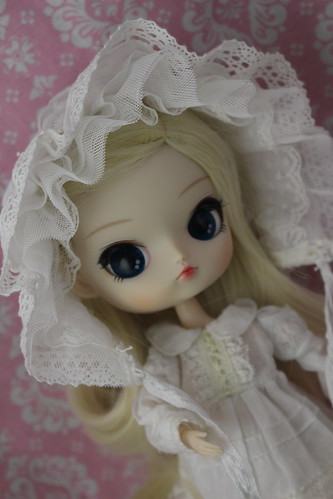 Let’s take a closer look at the girl hiding behind that bonnet! 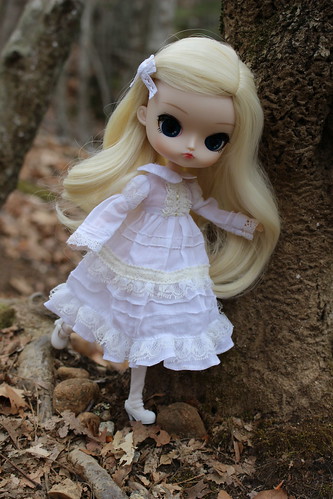 I really liked the juxtaposition of taking Silane’s photo outside, the landscape is organic and rough while she is immaculate. I had hoped to take more photos of her outside at the time but circumstances didn’t allow for it. 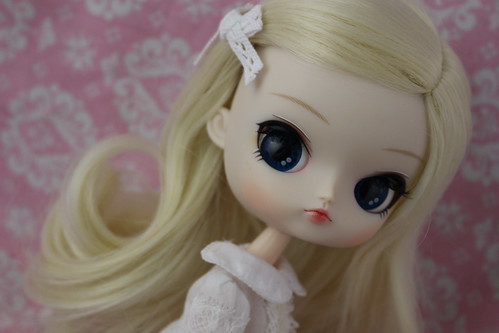 I love the added detail of the small lace hairbow, it is both a little extra touch of elegance and practical as it keeps the hair out of her face. She has such a pretty face it should be a shame to hide it! 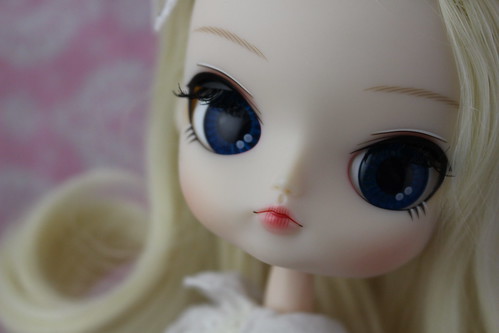 More photos of Dal Silane can be seen on my flickr. If you find yourself tempted to add a Dal Silane to your own doll family, she is available for purchase via Pullipstyle. I hope that you have enjoyed Silane’s moment in the spotlight. 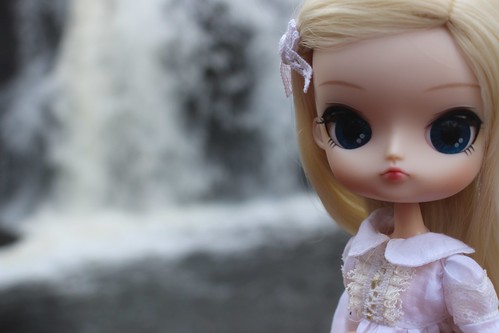