Groove shared a photo of some of their upcoming doll releases that were on display at Doll Show 48 via their twitter account yesterday. I’m very happy that Groove decided to share the photo so that we could all get a glimpse at the new dolls. 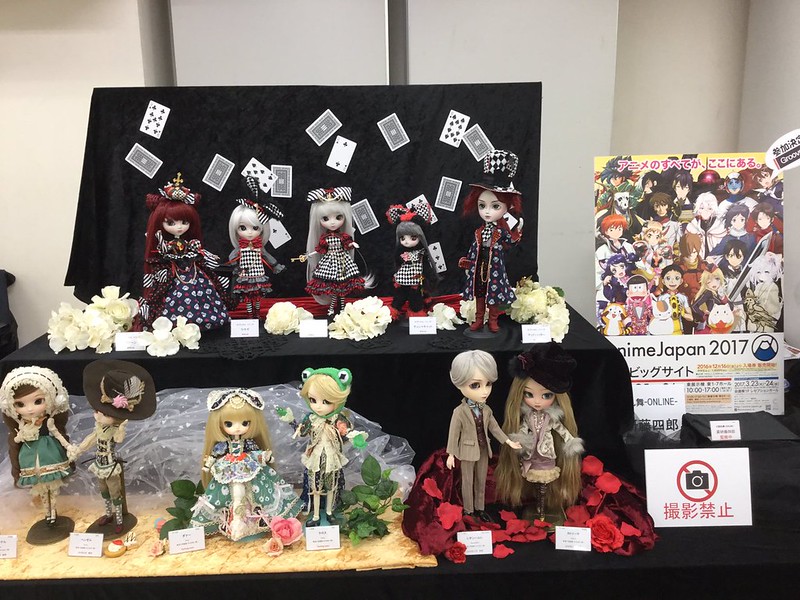 The top row features dolls from the Optical Alice series, Pullip Optical Alice (center) is the only doll that has been announced so far so it was very exciting to see prototypes of other dolls we didn’t know about yet from the series. It appears that Alice will be joined by a Pullip Queen of Hearts, an Isul (possibly a white rabbit?), a Dal Cheshire Cat and a Taeyang Mad Hatter.

The bottom row features Pullip Gretel & Isul Hansel who were released in 2016, alongside the upcoming releases Dal Princess Dana & Isul Caros all four of the dolls were inspired by fairy tales. Pullip Katrina & Taeyang ReonHARDT just came out in Japan and will be coming out in the US soon, they kind of stand out a bit on this display because they are the only dolls in normal clothing versus the more storybook inspired and fantastic outfits of their shelf-mates. I am absolutely loving Katrina’s almost bronze skin tone especially compared to the almost grey tone of the Optical Alice series dolls.

I cropped the picture that Groove posted so I could get a better look at the Optical Alice series, I was already counting the minutes until Optical Alice’s release now I can’t wait for news of the other dolls. It will be great to put names/release dates with releases, I’m especially excited about the Isul.