Dal Quince along with her counterpart Pullip Lupinus were designed by Silver Butterfly who previously co-designed Pullip Galene and Taeyang Natsume with Mitsubachi@BabyBee, Dal Quince and Pullip Lupinus represent their first solo effort as a part of the Creator’s Label line.  Groove stated on their blog that the face ups on Pullip Lupinus & Dal Quince were inspired by Bisque Dolls which are unglazed porcelain dolls that were popular in like the late 1800s, my experience with them is admittedly pretty limited (my mother has or had a few in her collection). They are kind of remarkable for having a matte finish to them and I think that Quince’s face up in particular really reminds me of that style particularly the blushing. 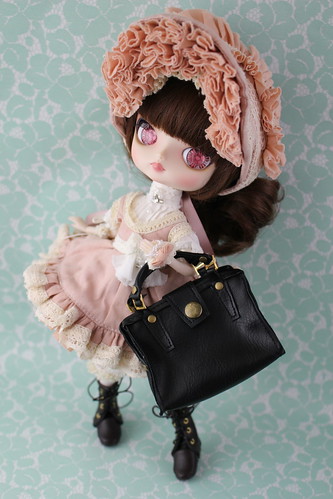 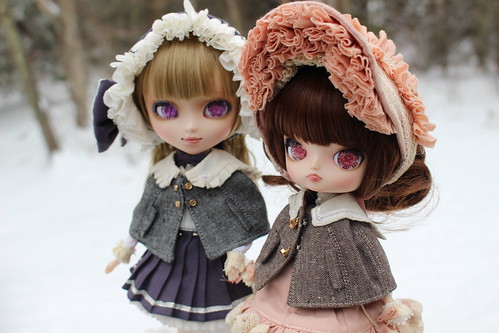 I have already recently covered Pullip Lupinus here so now it’s time to do a post focusing on Dal Quince.

Dal Quince in the box. 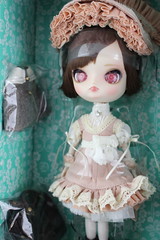 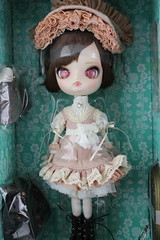 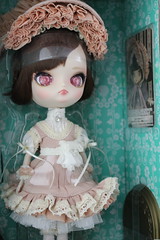 First impressions looking at Dal Quince in the box, oh my goodness just look at all those ruffles! Her stock looked well-made from the promotional photos but the photos honestly didn’t do it justice, she has one of the best quality stock outfits of the Dal releases that I have handled (and I’ve handled nearly all of them) if not the best.

How is the quality of the wig? When I see curls on a doll it immediately fills me with dread, I always fear that I am going to somehow ruin them but Quince’s hair is fairly short and her curls are not overly fussy so they shouldn’t be hard to maintain. I don’t mind a bit of a curl when her hair is like Quince’s. Her wig is kind of a rich chestnut in color, I think the wig both in color and style suits her really well. The texture of the hair is pretty nice though not as soft and silky as Pullip Cheshire Cat’s but it is still nice quality not to mention thick. 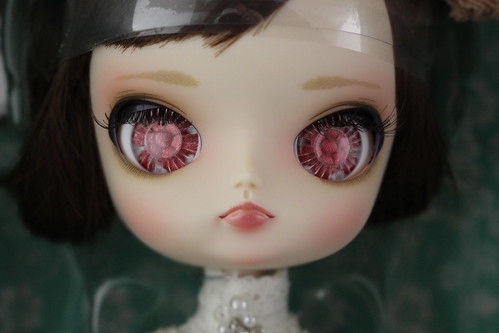 Dal Quince is a such a pretty pink princess. Her lips are one of my favorite of her features they are kind of a pearlized pink in color which pops nicely with the more subtle pink shading on her cheeks and chin. Her eye makeup is nicely done, it is not overly dramatic it’s very understated with some nice subtle eye shadow. I love her little eyebrows and that they are just a little bit bushy. Dal Quince (and Pullip Lupinus) are the first dolls with the new style of flower eye chip, fans of Pullip either love them or hate them with no middle ground. I tend to think that they could suit the right doll wonderfully and I know this trend is huge with ball jointed doll eyes but I’m not sure these were the best dolls to debut this new style of eye on that being said Lupinus’ eye chips grew on me and Quince’s never really bothered me. I love the way her eyes catch the light. 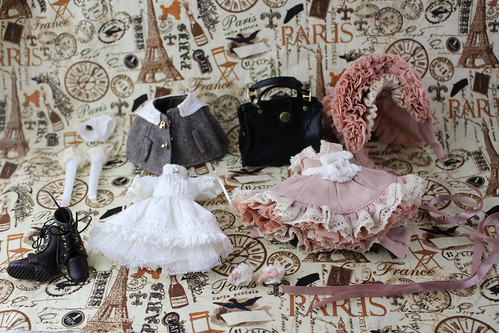 Dal Quince’s stock consisted of a frilly headdress, capelet, frilly underdress, jumper skirt, wrist corsages, panties, socks, boots and an oversized bag. Her stock outfit is amazing quality and it is incredibly detailed! I absolutely love the colors that were chose for it the kind of muted pink or dusty rose of the jumper and bonnet is great plus the kind of off-white lace detailing makes the white dress she wears underneath pop. The boots are really well made. The only thing I have a slight complaint about is that I have to kind of question the inclusion of is the oversized bag, it just seems a bit out of place on such a dainty girl but it’s an extra item so I just look at it as a bonus rather than a real fault of hers. 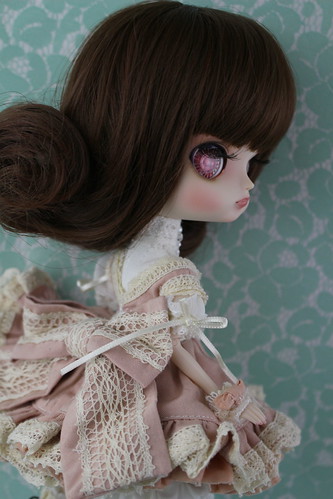 I just want to highlight a few of the lovely details of her stock outfit, on the back of her dress there is an oversized bow with wonderful lace detailing. I love the repeating motif of the bows she has a bow on the belt of her dress, her wrist corsages as well as on the cuffs of her sleeve it is nice to see it continued on the back of the dress which is a great detail that may be overlooked how many people really look at the back of the doll? Well we should be looking because there is some really great detail hiding there. 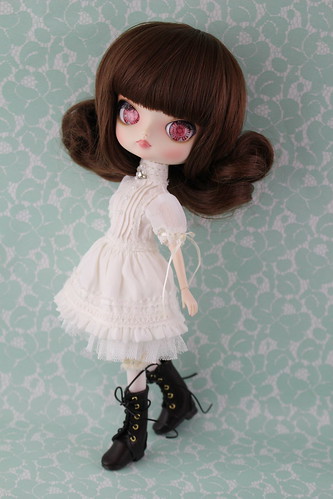 Another unexpected thing about her stock that I would like to highlight is the white dress hiding underneath the more colorful and ruffled jumper, for a piece that was created with the purpose of being mostly covered by another dress I was really impressed by the amount of detailing that was put into it. The bodice has pleating and there is also some lovely detailing along the hemline. 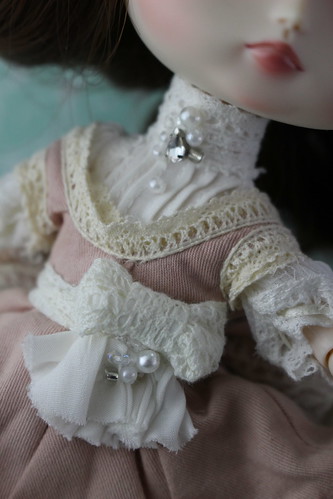 One last thing thing that really impressed me and that I’d like to highlight is the beading! She has some lovely beading detail on her belt bow as well as the faux pearl buttons on her dress and the detailing at her neckline which is a mix of faux pearls, a silver bead and as well as a jewel. 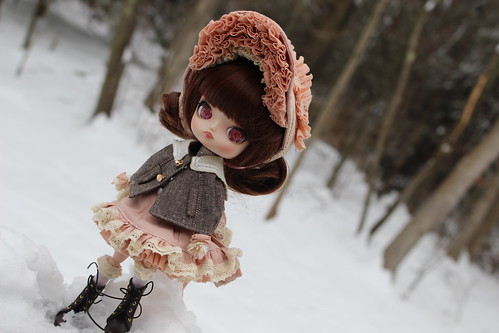 We had some snowfall recently, it being a New England the three to four inches we got received wasn’t that much for us but it was enough to take Quince out for some photos outside in the snow. For anyone wondering how she is standing in the snow, her stand is buried under or otherwise concealed by the snow. 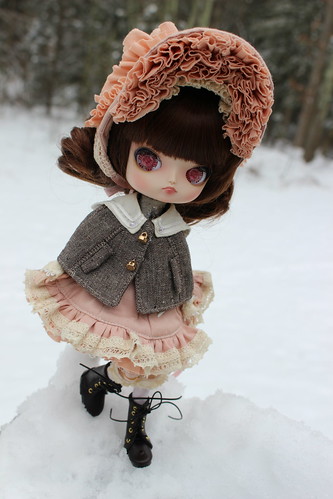 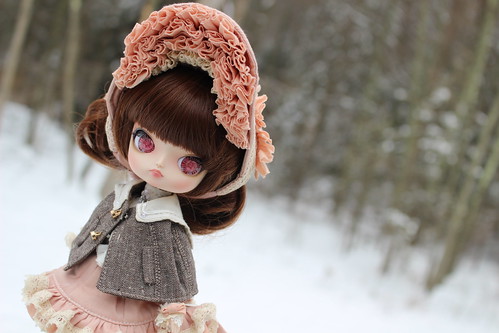 Looking at her outdoor photos, her blushing makes her cheeks look very rosy like she overexerted herself playing outside in the snow. 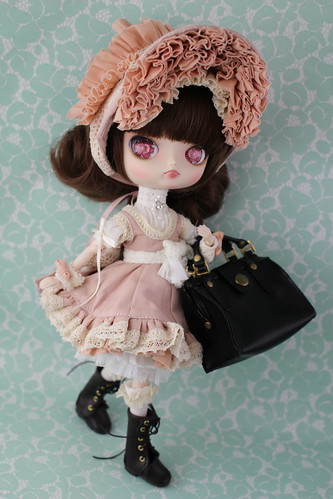 Dal Quince is ready to go on an adventure or maybe just to a tea party! 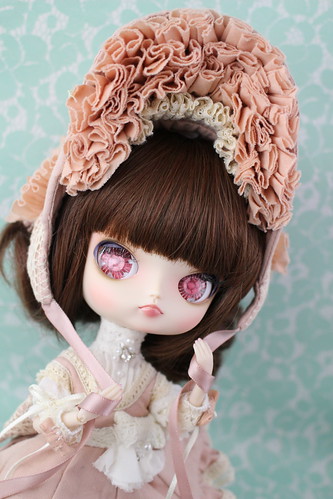 The headdress is amazing with it’s many rows of ruffles, I absolutely love the ribbon ties on it too it looks so dainty and feminine. 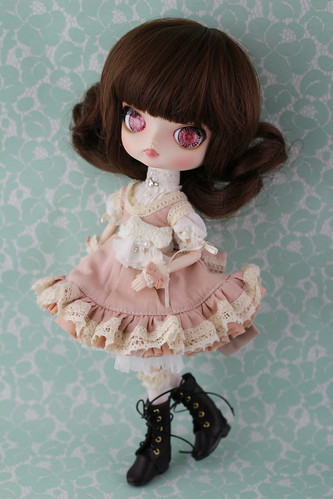 Dal Quince is such a darling little lady. 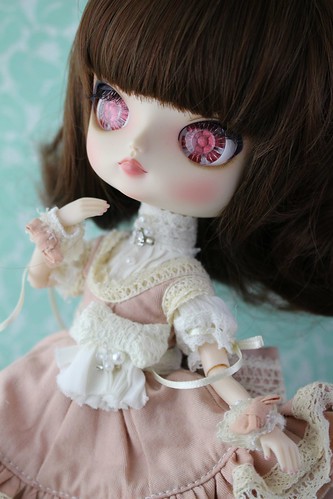 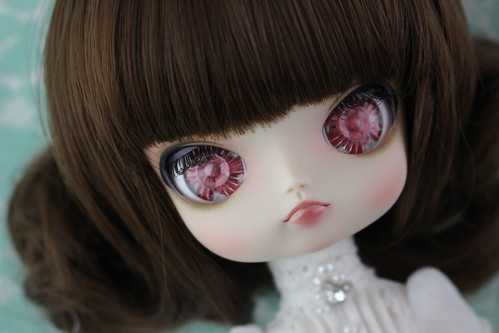 She has such a pretty face! I’m still not sure what I think of the new style of eye chip overall but I think that do work quite nicely on Quince. With Lupinus I wanted to see her with more normalized chips in before I ended up returning her to her stock eye chips because I missed them, Quince I never even considered rechipping her. 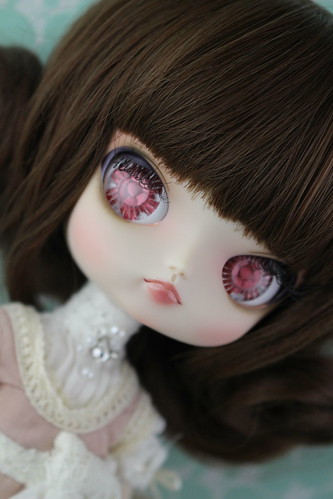 More photos of Dal Quince can be seen on my flickr. I hope that you have enjoyed this closer look at Dal Quince, I haven’t written about a Dal besides ho-ho here for a while so this was nice opportunity to play with a Dal again unfortunately now I want Dal Alpin now more than ever. If you haven’t already please check out my post highlighting Dal Quince’s counterpart Pullip Lupinus. 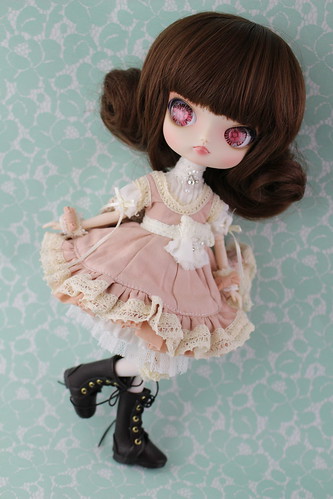