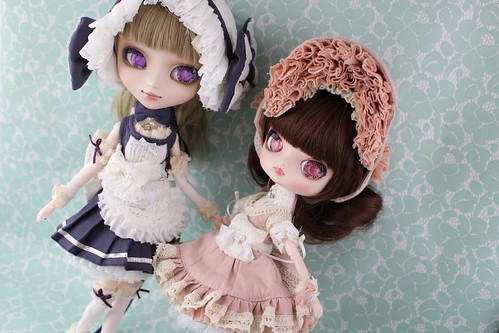 Pullip Lupinus & Dal Quince were both released last month in Japan and are set to be released here in the US in the next few days. Both of the dolls have a MSRP of 20000 yen. I got a bit impatient while waiting for the US release for the pair so I imported so I could get my dolls a bit earlier. 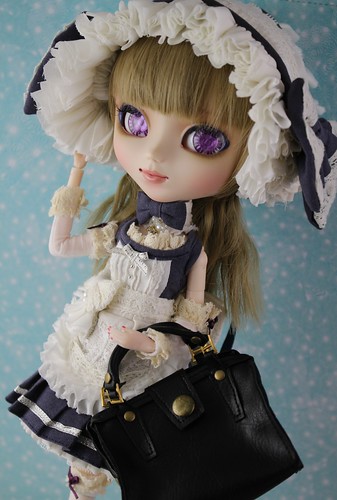 I previously introduced Pullip Lupinus here recently when I did a post focusing on the new eye mechanism feature which you can see here, she is the second Pullip released that has the new feature that allows her to have her eyes partially open versus just opened or closed. I thought it was time to make a post here focusing on all of the lovely Lupinus!

Pullip Lupinus in the box 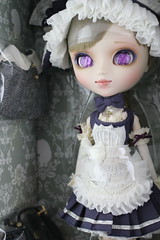 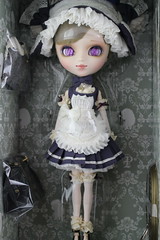 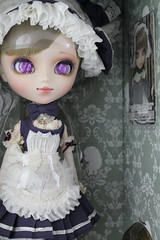 First impressions looking at Pullip Lupinus in the box, wow those are indeed some striking eye chips! I thought that her stock dress was dark gray but it is actually kind of a muted dark blue in color. Her stock is even more amazing in person than I was led to believe by the stock photos, I was impressed by the level of detail and those ruffles especially on her headdress and apron are absolutely amazing! She comes with a gold plastic stand as well as a collector’s card.

How is the quality of the wig? The wig choice admittedly kind of surprised me a bit, this style isn’t something that we see from Groove very often stylistically it reminded more of wigs from Leekeworld. The color of the wig is nice sandy brown, the quality is nice though I wish it was a little more full. Though the wig wasn’t quite as full as I would  have liked, there is no bare spots/wig cap showing and I’m overall very happy with the wig. 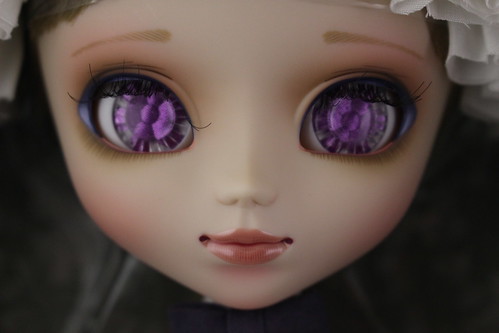 Pullip Lupinus has a nicely detailed face up. Her lips are one of my favorite of her features, the shape is a bit accentuated and the lining on them is nicely done plus the color is lovely and even a bit glossy.  She has some really nice blushing on her cheeks in addition to her rosy cheeks she has some nice shading/contouring underneath her chin. Her under eye makeup is intricate and very detailed with dark brown eyelashes under a lighter brown shading, the upper eye features bold purple eyeliner. She has such delicate and feminine little eyebrows, they look so dainty!

Pullip Lupinus (and Dal Quince) feature the debut of a new style of eye chip, Groove said that they are inspired by flowers but they look almost bejeweled to me. I initially had a bit of misgivings about the eye chips, I know this style of eyes is extremely popular in the bjd communities and I think they have the potential to look great in the right doll, they could really enhance a doll’s look if done properly. They seemed a bit out of place on Lupinus so I rechipped her only to end up missing her stock look and replacing her original chips. The chips are extraordinary somehow they just work on her without them she loses some of her spark of personality. 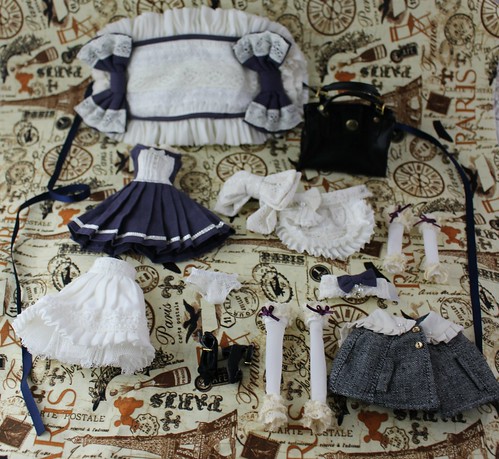 Pullip Lupinus’ stock consists of a headdress, capelet, choker, arm warmers, one piece dress, apron, panier, panties, leggings, an oversized bag and shoes. I was really impressed with the quality of her stock, it looked nice in the promotional photos but in person it was even nicer than I could have imagined.

The headdress is amazing, I absolutely love all the lace and ruffles plus it is actually wired which helps it keep it’s shape when on Pullip. Even the panier which we only see a little bit of underneath her halter dress is nicely detailed. Her halter dress is very stylish. Her arm warmers and leggings are detailed with ribbons and lace, I love the ribbons on them they make for a great little detail! Her apron is another really great stock item, I love the layers of ruffles and the bows especially the off-center one on the front of the skirt with the pearl detailing. The tweed capelet is nicely constructed with hidden hook and eye closures. Her choker with the attached bow-tie is too cute! The bag is nicely made but it still strikes me as a bit of a random accessory, it just seems a bit too big compared to how dainty and feminine she is. 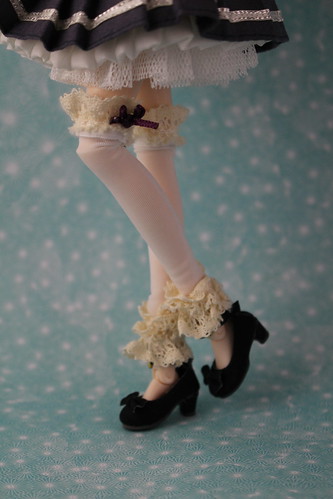 The adorable little shoes with the adorable little bows. I wish that her leggings were socks instead as, as much as I love the lacey ruffles the shoes are just a little bit loose and I feel like if they had been socks they would have been a perfect fit then. 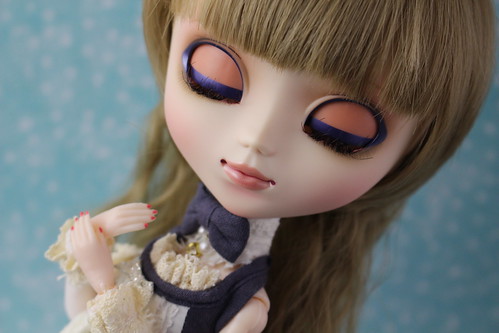 I wanted to showcase both her striking eyelid colors as well as her pretty pink nail polish. I love the contrast between the mellow apricot shade of her eyelid and the purple of her eyeliner/eye makeup. 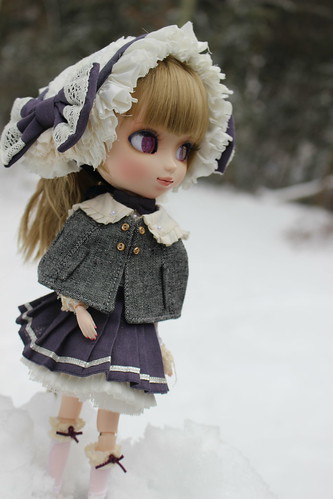 I decided to seize the opportunity after we had a small snowstorm and take Pullip Lupinus out to play in the snow and show off her capelet. 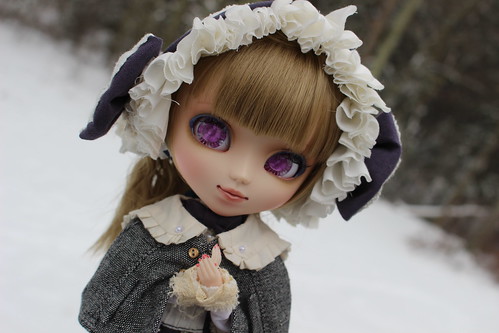 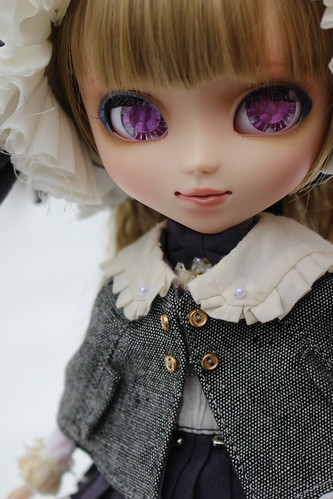 Lupinus’ tweed capelet is a great addition to her stock outfit as it really enhances her whole look. It is nicely made and I love all the little details like the golden buttons as well as the pearl buttons on her lapel and the ruffles don’t get me started on the ruffles! 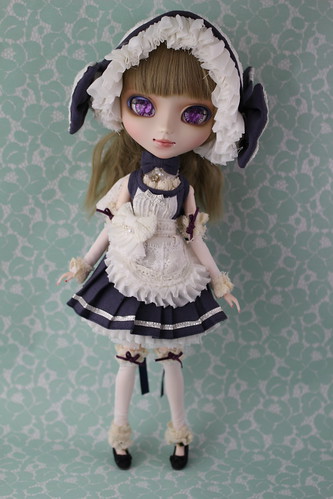 I love that Lupinus has a modernized version of the classic maid dress. Her dress is not overtly sexualized as a lot of maid costumes are ie. all the sexy maid costumes that flood the costume shops around Halloween that have a tendency to look a bit tacky, Lupinus’ dress is very tastefully done and stylish! 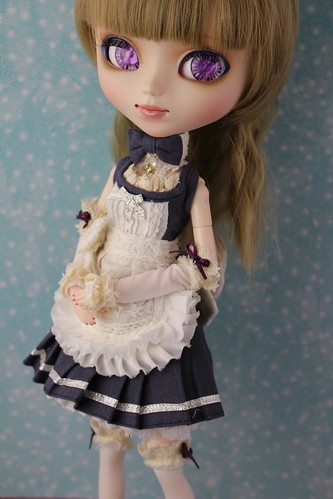 I love the bow motif that is continued throughout her outfit, she has a bowtie she has bows accentuating her arm warmers, her dress, her apron and even on the back of her capelet. 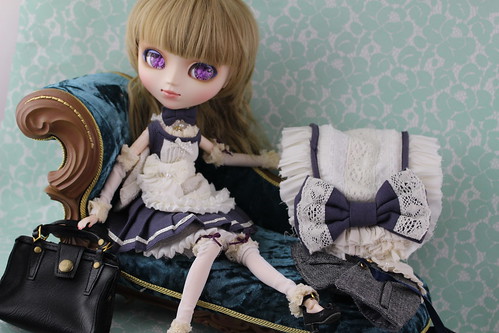 Lupinus relaxing after a hard day on the Petit Luxury couch. 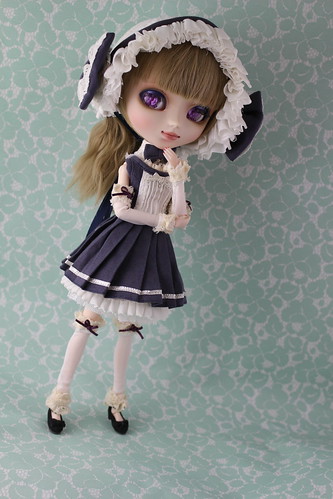 I wanted to take a few pictures of her without her apron though I love it, I wanted to show off her halter dress without the apron in the way. 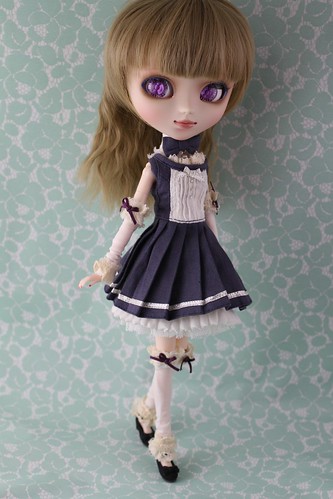 I love the pleats in her skirt and the ribbon detailing on the hemline, the ribbon gives the skirt a bit of a pop and keeps it from being too plain. 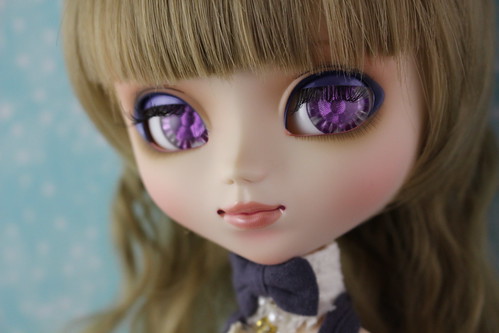 Lupinus showing off the newer eye mechanism function, I love how sly and knowing it makes her look. 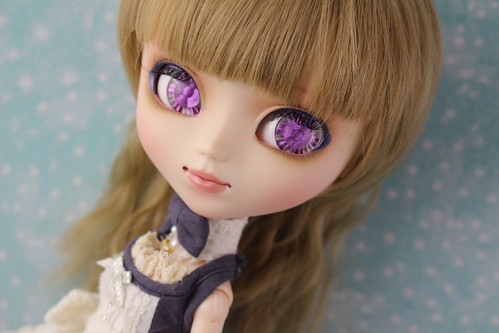 More photos of Pullip Lupinus can be seen on my flickr. I hope you have enjoyed this closer look at Pullip Lupinus, her companion release Dal Quince will be featured here next very soon! In the meantime, please enjoy a bit of a bonus round with Pullip Lupinus…

Bonus Round: Since I knew that Lupinus’ eye chips are a very divisive issue within the Pullip community (people seem to love them or hate them with no in between) and I was pretty curious myself about what Lupinus would look like with normal eye chips in I decided to try out some other eye chips in her. 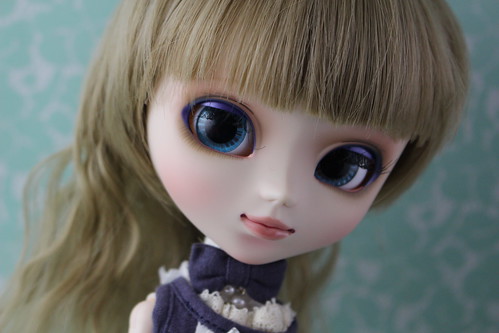 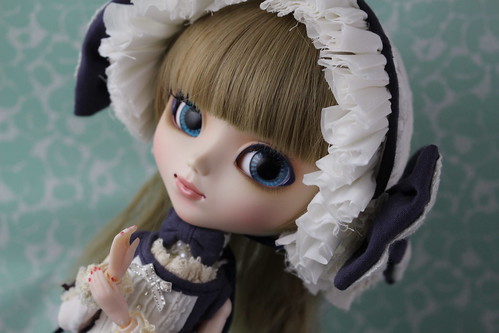 I thought the chips suited her reasonably well but were maybe just a bit too pale for my taste. 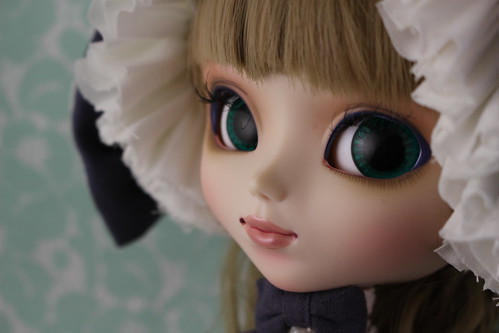 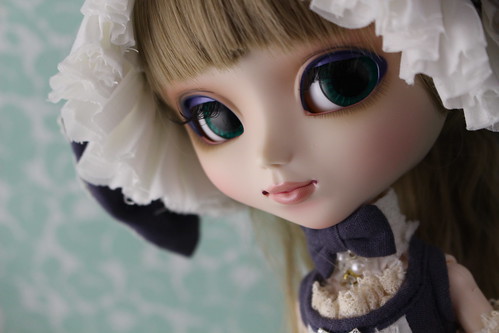