Today, I will feature a doll so sweet that it may just give you cavities! The Beary Fairy series debuted in late 2011 with the releases of Dal Dalcomi & Byul Secomi which was followed by the release of the super popular Pullip Kiyomi. Almost two years after the release of Kiyomi, in July of 2014 Isul Gosomi joined the Beary Fairy crew! It had looked like Gosomi would be the final member of the Berry Fairy crew for quite some time but a new version of Kiyomi was released as a part of the new Pullip Premium line.

Generally boy dolls can be kind of hit or miss with me but somehow I can’t seem to get enough Isul, he’s really grown on me over the years since his original release release. Normally when I’m considering buying a doll there are certain criteria I look at, I tend to prioritize Pullip over the other dolls in the Pullip family then I have to love the whole doll (the actual doll and the outfit/stylization) otherwise they go farther down on the wish list in the maybe category. I loved Gosomi as a doll but I wasn’t too sure about that bear suit so I hesitated on getting him. Another thing that had made me hesitate about Gosomi was that there really weren’t many owner photos of him. I was finally able to get a deal on Gosomi from one of JPGroove‘s Sample Sales. If you aren’t familiar with or haven’t had the opportunity to experience one of JPGroove’s Sample Sales it’s utter madness, they periodically list display dolls on their website at a discount and it quickly turns into a feeding frenzy as everyone tries to buy up the dolls as quickly as possible.

At the Sample Sale price I couldn’t resist Gosomi and I’m incredibly happy to say I absolutely don’t regret that decision as I adored him in person, even that darned bear suit was a lot more cute and cuddly in person than I could have ever  imagined. Since I knew that I had trouble finding photos many owner photos of Isul Gosomi myself, I wanted to make the effort to share a lot of pictures of him so everyone can see how precious he is! 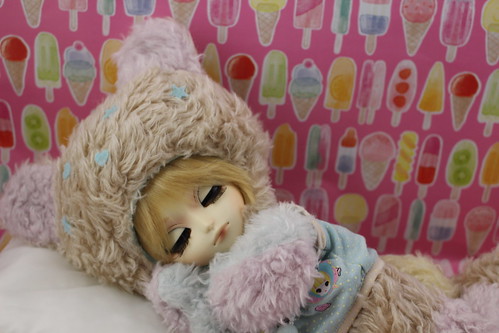 Welcome to my wonderful kingdom!! Whipped cream fields and a macaron forest… The colorful candies are gifts from the sky… Come on, let’s go hide in the cotton candy castle together… Situation Like So.

As I mentioned above, I purchased Isul Gosomi from one of JPGroove’s Sample Sales so unfortunately I do not have any photos of him in the box to share. I believe he originally came with a yellow/orange plastic stand but as I mentioned above there really aren’t many owner photos of him around so I have had a hard time trying to confirm this ^^; . 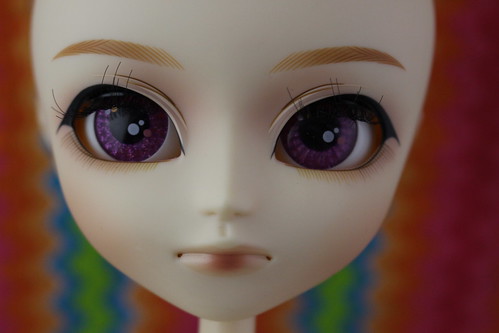 Gosomi has a great face up, possibly even my favorite Isul face up. I absolutely love his glittery purple eyechips, they catch and reflect the light really nicely. The original version of Pullip Kiyomi has similar glitter eyechips but her’s are gold colored.  The eye makeup on the upper part of the eye is stylized a bit, it’s further accentuated by the black color of the eyeliner. On the lower part of the eye, the eye makeup is very refined and delicate it’s a lot lighter in color than the on the upper eye. His eyebrows are nicely detailed with the crosshatching and the color really suits him nicely. His lips are a neutral color, the color gradients darker towards the center of the lip.

How about the wig? The wig is a great honey blond color, the quality is decent though the cut on mine was a bit strange but I believe that is probably because he was a sample doll. 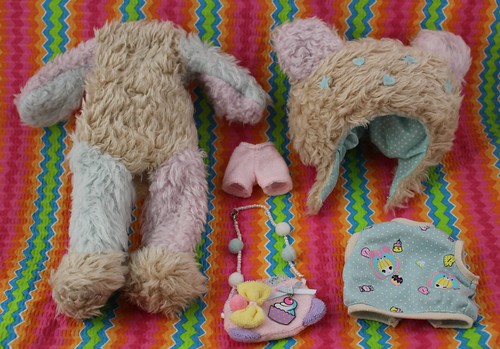 Isul Gosomi’s stock consists of the fluffy bear suit which is two pieces: a full body suit and a bear hood, a purse, a shirt and some boxers. The bear suit is made of pastel faux fur, it’s very soft and fluffy. The color of the suit is mostly beige, the arms are alternating shades of pink and blue while the hood is mostly beige with pink ears and has pale blue stars adorning it. The hood is lined with light blue & white polka dots fabric, the bear suit itself is also partially lined with the same fabric. Overall I have to say for an animal suit I was impressed with the quality, I had a hard time resisting the urge to give him a hug. In addition to the bear suit Gosomi comes with a modest pair of pink boxers, a shirt designed to be worn over the bear suit and a purse. The print on the shirt is nice and colorful, I especially love the little Byul Secomi and candy drawings on it. The bag may be a bit too dainty and feminine for Isul Gosomi with it’s pearl straps the overall design is cute and I love the little candy detailing on it. 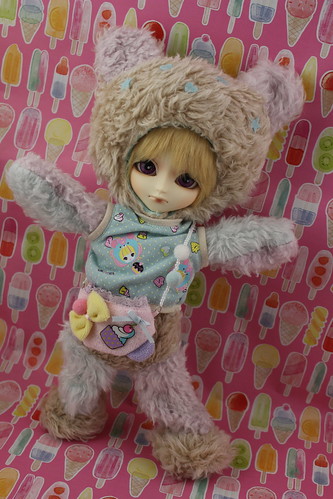 Somebody wants a hug! 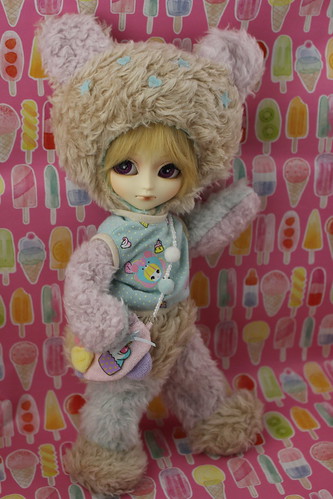 As absolutely ridiculous and over the top the bear costume is, it is so overwhelmingly cute in person I had a hard time not smiling whenever I glanced over at him on the shelf wearing it and even though I have redressed him multiple times he somehow always ends up back in the bear suit. 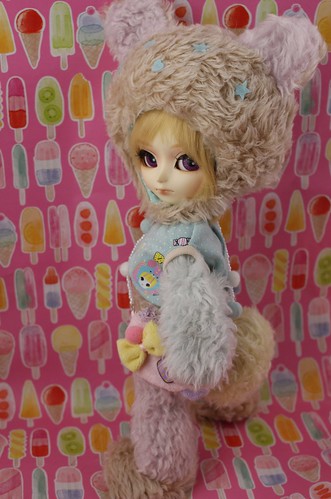 Gosomi trying  and failing to look a bit serious in the bear suit; oh no I am in danger of getting cuddled, run for your lives!!! In all seriousness I included this photo to show his oversized puff of a tail. 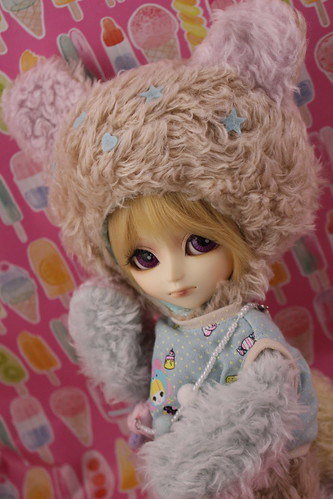 I do love how his purple eyechips catch the light, they are very dynamic! 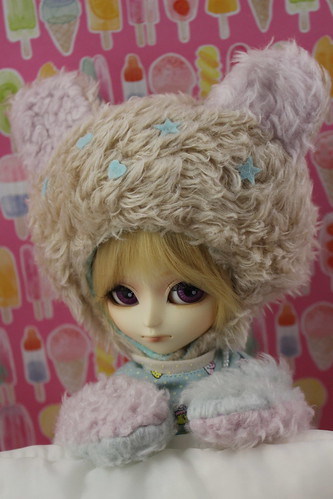 I think the thing that amuses me the most about Gosomi isn’t the bear suit but his slightly displeased facial expression with his tightly closed lips, like yes I am wearing the bear suit but I am not particularly happy about it. 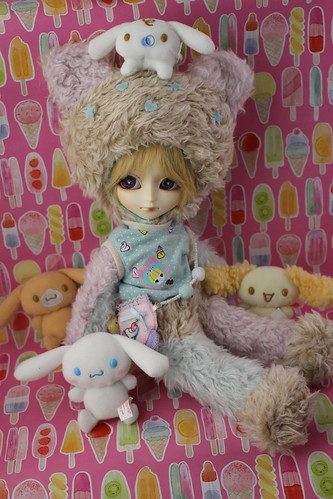 Gosomi trying to blend in with his plush companions! 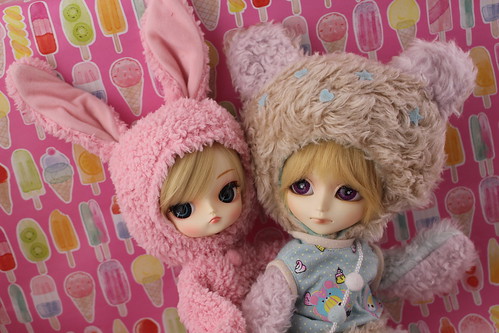 Gosomi even recruited Dal to play dress up with him, hoping he wouldn’t look quite so silly if he wasn’t the only one in an animal costume. Dal was less than pleased with this arrangement. 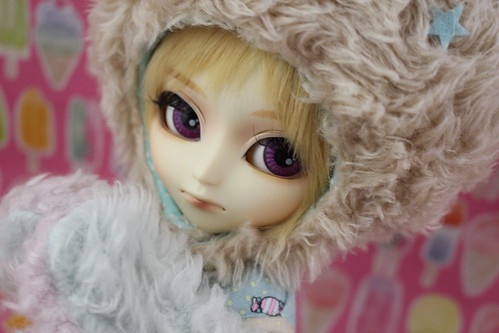 “Please can we be done with bear suit for a little while?”. 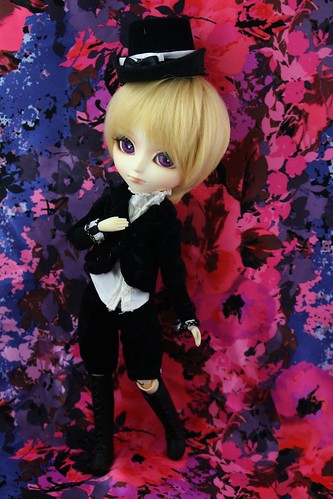 I know other people had probably had the same problem as me and that Isul Gosomi’s bear suit probably made some people overlook what a handsome boy is hiding underneath it. I chose to include some photos of him in the Black Peace Now Giovanni outfit set as well as the bear suit to help everyone see his potential outside of the bear suit. I bought the Black Peace Now Giovanni outfit set from JPGroove where it is on sale for $22.95 which is an absolute steal for such a nice outfit set. 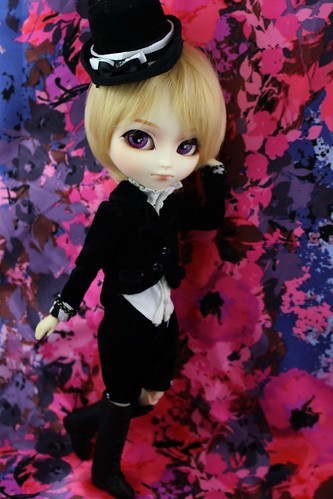 He is quite the dapper little gentlemen outside of the bear suit. 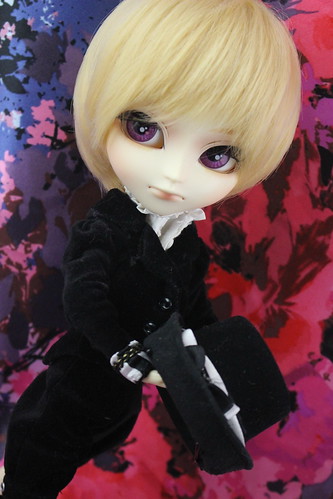 I hope others see that even if you don’t like the overly cute bear suit, he does have a lot of amazing potential outside of it. 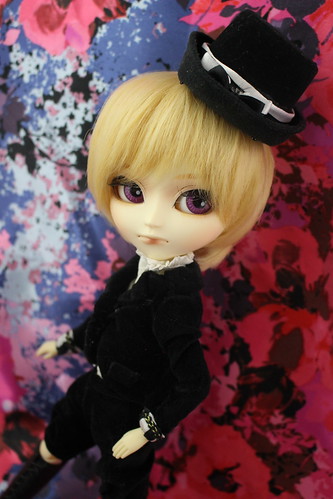 Keen readers of this site may recognize Isul Gosomi from another outfit set that I recently reviewed here, he was the unlucky Isul selected to try on the Antique Skull Dress set to see if it would fit on an Isul or not. I think it’s safe to say that when it comes to fashion, Isul is fearless! 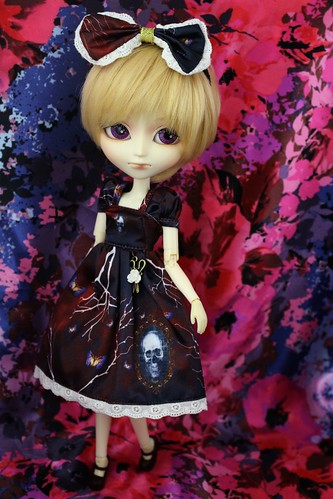 Well that’s all for now! I hope you have enjoyed this look at Isul Gosomi, there are a lot more photos of him to see on my flickr. Isul Gosomi is available for purchase via Pullipstyle and JPGroove. Sweet dreams everyone! 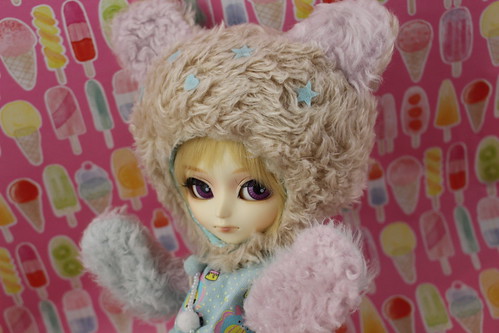