I know it may not seem like it sometimes but I do collect dolls other than those made by Groove. I’ve been collecting ball jointed dolls or bjds since early 2008 when Fairyland debuted their Littlefee line and I fell head over heels for Ante since then I have acquired a small army of mostly tiny bjds (those under 30cm). One of my favorite bjd companies is Latidoll they make absurdly cute tiny dolls and I’m addicted to the sweet pitch of their siren’s call.

Unlike most bjd companies, Lati is not continually open for orders normally they have maybe four limited events a year where they have orders open for a few weeks for a series of limited dolls. Normally they open orders for basic dolls for a week or two following the event. Additionally sometimes dolls are made exclusively for doll events/doll parties. Last fall, Lati announced a Cinderella event including Lati White SP Haru based on Cinderella’s mouse friend and well this picture did me in, I had to order her! 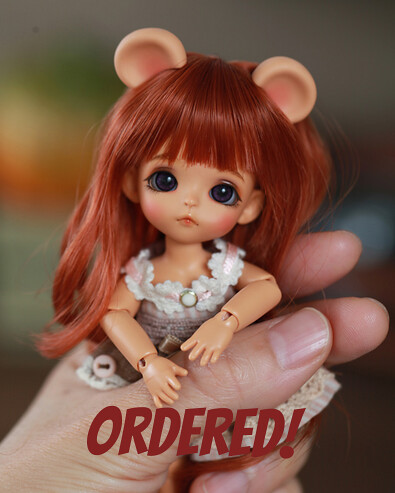 I placed my order for Lati White SP T. Haru on 10/16/2015 and so began my wait, bjds are made to order and production normally takes some time. Most companies like Luts normally have a three to four month turnaround time, Lati is notorious for their wait times. In the past I have waited as long as ten months for my Latidoll orders but most of the time I had my order within eight months which is still pretty ridiculous. I started getting antsy last month when I still hadn’t heard anything about my order, I wrote them on their q and a board and was told my order would ship early October. Early October came and went so I wrote them again last week, they finally shipped me my order. I received my order on 10/19/2016 over one year after I placed it.

In addition to Lati White SP T.Haru’s full set I qualified for the event head Joy, I paid an additional fee to have a face up and a body added to the order (I want to say it was about $200) and I ordered two of the “steward” companion animals from this event for a friend who wanted them but didn’t want any of the dolls from the event. 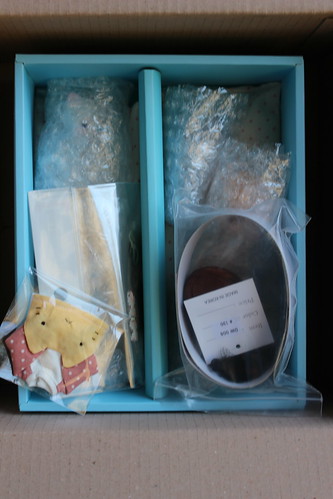 The box arrived on Wednesday, to Lati’s credit they did include a Lati Yellow sized sweater as a bonus because of the long wait (it’s cute but doesn’t make up for the year long wait). 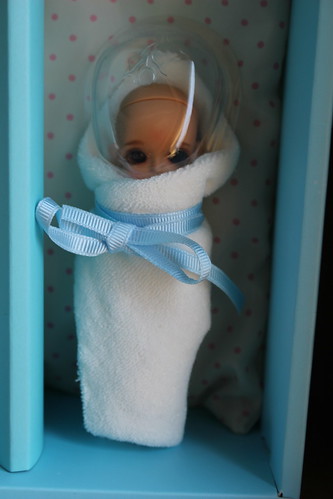 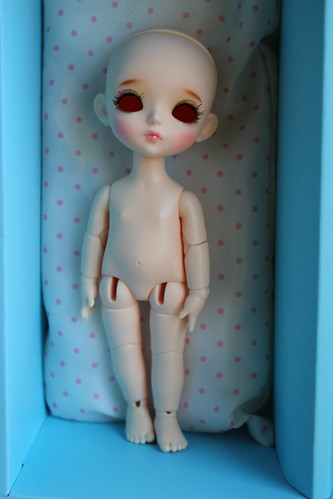 Lati Yellow Joy who was sent without eyes, I did not realize how creepy Lati Yellows were without eyes. Lati’s skin tone has had a lot of variation over the year, I’ve learned from past experience that if I even remotely like the head I should order a body for it at the same time otherwise it can be next to impossible to find a match for it. Worst case if I don’t like the head as much as I thought I would in person it’s a lot easier to sell as a whole doll versus as just a head. 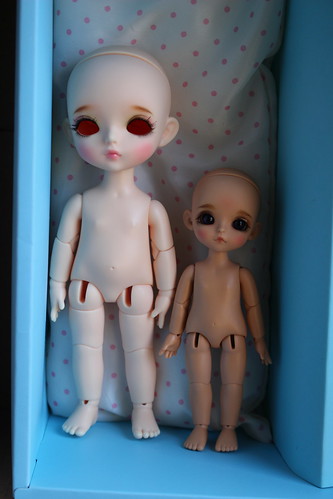 Both dolls together, it’s interesting to see the height difference as well as the difference in skin tones T.Haru was ordered in a tan skintone and Joy was only available in a normal skin tone (I don’t name the skintones, I’m referring to them as what Lati describes them as). 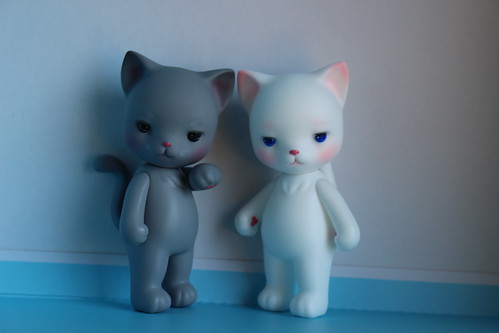 The steward companions which aren’t mine but I couldn’t resist snapping a few pictures of when I inspected them to make sure they weren’t damaged. 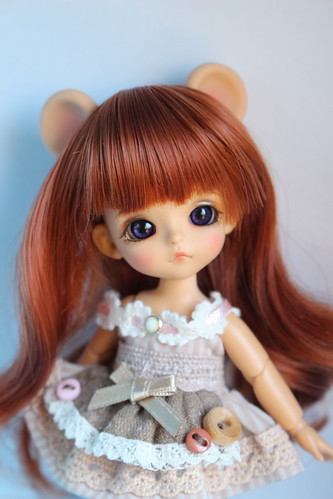 I absolutely love T.Haru, her full set outfit is well made and detailed despite it’s tiny size. I can not even fathom sewing something as detailed as her outfit in that size. 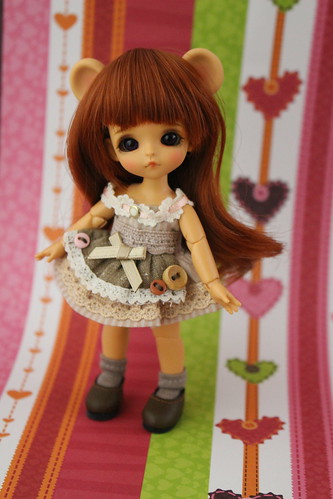 Her full set even comes with little resin ears that attach via magnets. 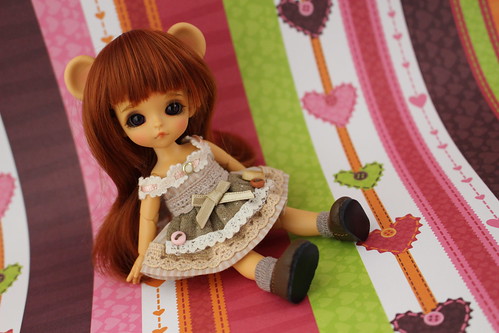 As long as she took to get here, I don’t really regret ordering her because she is just so cute! 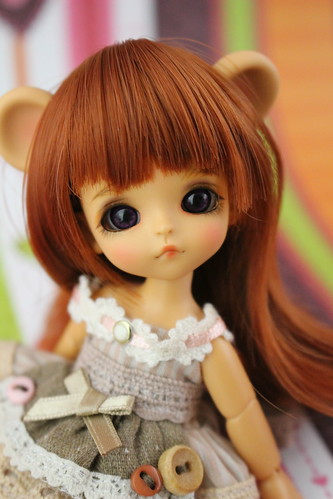 I adore my little Gusty, her name was inspired by Gusgus the mouse from Disney’s Cinderella movie (yes I know there were girl mouses I could have named her after but I’ve been calling her Gus in my head since I ordered).

Despite having a year to prepare for her arrival, I was ill-prepared for the arrival of Joy while I have an absolutely absurd amount of Lati Yellow clothing on hand I had limited eye and wig choices. 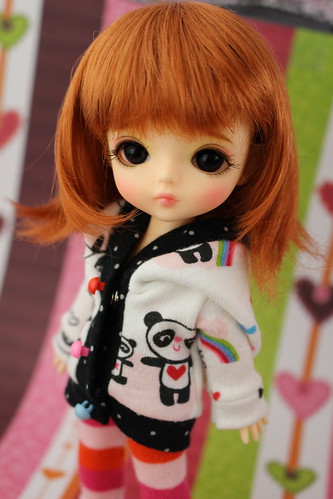 While this wig was simply an unclaimed wig and supposed to be a temporary choice, I absolutely love it on her and I think think she will be keeping it! I need to order her a new set of eyes as these were one of only two pairs I had in the right size and the others were kind of a pale yellow and not very attractive, I’m thinking she will likely have blue or green eyes. 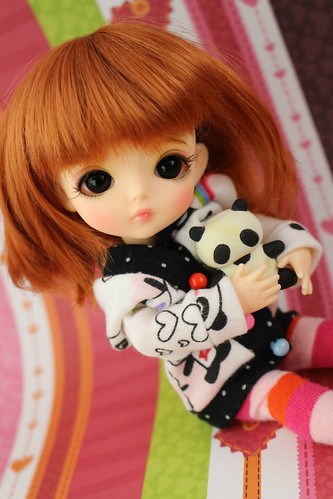 I was kind of hoping that I wouldn’t like her so much and that I could potentially rehome her after her arrival but nope she is too cute, she is staying!

Size Comparisons T.Haru was the first Lati White SP sized doll to join my bjd crew so I decided to take a couple of quick size comparison shots for anyone curious as I know it’s sometimes hard to visualize how big large other dolls are in comparison. 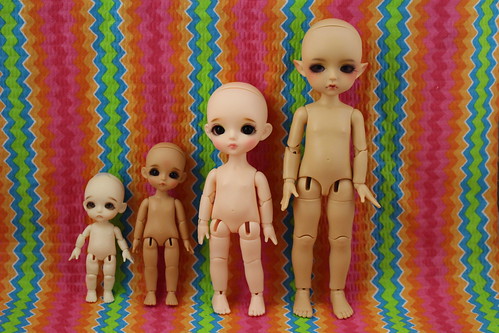 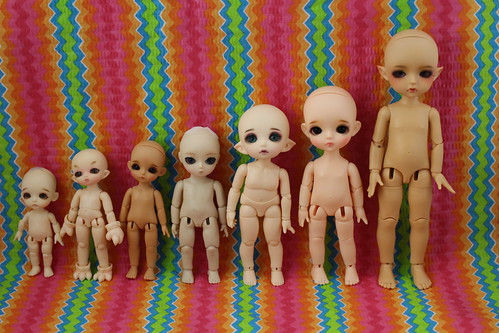 Size comparison with other Latidoll sizes as well as dolls by other companies, from smallest to largest: Lati White Belle, Fairyland Pukipuki Lily (with pukisha parts), Lati White SP T.Haru, Jun Planning Ai Doll Beleporene, Fairyland Pukifee Mio, Lati Yellow Joy and Lati Yellow SP Lea. I had meant to include a Luts Tiny Delf in this photo as well but ran into an issue as all of my Luts Tiny Delfs are centaurs so while my little herd is adorable they are not the best for size comparisons. When my Luts Tiny Delf Hansel from the Halloween event arrives I will take an updated size comparison shot. 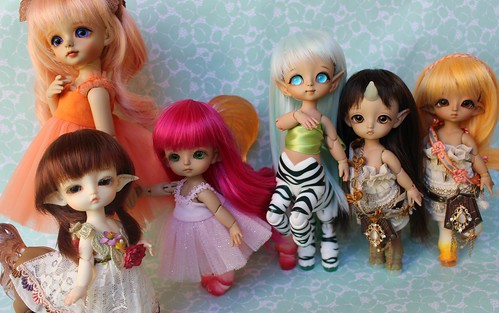 Picture of said herd as proof of their adorableness

The reference to the Luts Tiny Delf Centaurs is not entirely a tangent, while the Tiny Delf centaurs are limited and only available during special order periods Luts has without fail had my tiny taurs to me in four months or less. The Tiny Delf centaurs are similar in size but a lot more complex in construction than Lati Yellows, if Luts can have my centaurs to me in four months how on earth can Lati take over a year to produce a less complex doll?

As much as I love Lati’s dolls I think this will be the last time that I will order from them directly as at this point I don’t have the patience for it anymore. If I am to acquire any other Latis besides the other two I currently have on order, I will be hunting them down on the secondary market. I love the dolls but I can no longer deal with the wait. I know I normally don’t post about my bjds here very much but I wanted to share pictures of my new dolls as well as post this publicly somewhere so it can serve as a warning to anyone tempted by their adorable bjds that if you order from them you will be in for a long wait. Lati’s wait times are ridiculous, it’s been a known issue for years but it seems to be getting worse over time instead of improving. I have no doubt that I would still be waiting if I did not write them again! If Lati starts delivering their dolls in a more reasonable amount of time I will order from them again but until then Luts and Fairyland can have my money instead (though Groove still gets the bulk of it!). 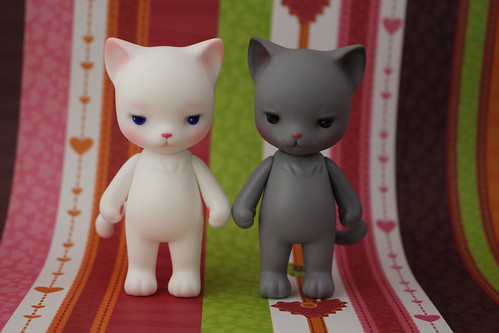