I wanted to talk about something a bit different today! I love scary things and horror movies especially (just finished watching Don’t Look Now on blu-ray in fact). Last year, I was browsing Netflix trying to find something to watch and American Horror Story caught my eye. I had several friends that knew of my love scary things recommend it to me previously so I figured what the hell, I’ll give it a shot and watch the first episode… I ended up watching the first six episodes in one sitting and only stopped there because I realized the sun was already coming up oops. Needless to say I was a fan, I quickly watched and then re-watched the first three seasons while waiting for the fourth season Freak Show to start and have been watching the series in real time ever since though the current season has kind of left me feeling kind of meh (it’s kind of a slowburn). 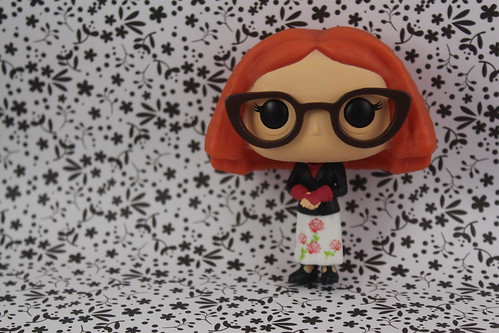 Though far from the scariest season, I was pretty partial to Coven it being the only season besides Hotel my husband would actually sit through as he does not care for the scary things. Being a doll collector every time I would watch Coven, in the back of my mind all I could think about was hmm wow a lot of these designs would make great dolls! There really hadn’t been much toy-style merchandise besides Funko Pop Vinyl Figures for American Horror Story (my favorite of the AHS pops Myrtle Snow is pictured above) that is until now!

I was elated earlier today when I was browsing facebook and saw someone mention the new American Horror Story Coven dolls by Integrity Toys. I had heard of Integrity Toys before but wasn’t really that familiar with them other than knowing that they had a license for Jem and the Holograms dolls and dolls based off of characters from My Little Pony. Not really being familiar with the brand or even where to buy them I went to the brand’s    website and saw that Fabricfriendsanddolls was one of their dealers, I’ve bought bjds several times through Fabricfriendsanddolls and have always been very happy with their service so I was happy to find a trusted source to buy from!

What are Integrity Toys dolls? They are American fashion dolls, they are approximately 12.5 inches tall. The preorders opened for all of the American Horror Story Coven dolls opened up today, Integrity Toys really doesn’t give much of a warning for wanting to empty my wallet.

The first of the series to be released will be Marie Laveau, the voodoo queen of New Orleans as portrayed by Angela Bassett. Marie Laveau comes out late October and is limited to 600. She is priced at $130.

Wow she looks as fierce as her character!

The next two in the series Madison Montgomery and Kyle Spencer who will both be released mid-November, both dolls have a MSRP of $130. Madison’s doll is limited to 800. Madison Montgomery was portrayed by Emma Roberts (who seems to have completely moved on to Scream Queens now!) in AHS Coven. Her character was not the most likeable in the series to me, at least but I think the doll did a good job of portraying the character’s wildness.

Madison’s outfit is amazing, Integrity Toys did a really great job of translating her outfit on the series into doll form!

Kyle’s doll also comes out in mid-November. Kyle was portrayed by Evan Peters in Coven, his character was a nice guy who kind of fell to pieces (more literally after Madison accidentally killed him, she and Zoe pieced him back together and brought him back to life with less than stellar results initially anyway). Kyle is limited to 700 dolls.

Kyle is the only boy doll in the line, while I love the character I’m not so keen on boy dolls generally.

When I first saw this next one it took me a moment to realize that it was Zoe Benson as portrayed by Taissa Farmiga. The outfit that Integrity Toys just doesn’t seem to be one of her more iconic outfits from the series but her character unlike many this season wasn’t really known for her impressive clothing styles. Zoe Benson was the first witch we met in the series and was probably one of the more relatable characters in the series. Zoe Benson’s doll is limited to 800 dolls.

I feel like Zoe is the only doll that kind of misses the mark to me, somehow she doesn’t read as Zoe to me.

Next up is my favorite character not to mention my favorite of the doll line, Myrtle Snow! Myrtle Snow was portrayed by Frances Conroy, every season that Frances Conroy has appeared in her character ends up being my favorite. Myrtle Snow is a powerful witch with a passion for fashion and key lime pie! Her quirky character really translated well into doll form! She will be released mid-December and is limited to 650 dolls, she is priced at $130.

As soon as I saw pictures of this one I just knew that I would have to have her! I love that they even got her glasses right, my only complaint is that I wish her hair was a bit more full as it is quite something in the series (she’s been buying in bulk from Korea for years!).

Last but certainly not least is the coven’s supreme, Fiona Goode! Jessica Lange’s character Fiona was the super glamorous and stylish leader of the coven. Fiona does not come out until mid-January, she is priced at $130 and will be limited to 900 dolls.

Fiona looks absolutely amazing and she even comes with a functional umbrella! She is wearing one of her many iconic outfits from the series.

I’m pretty excited about this doll line though I wonder why there is not a doll for Cordelia Foxx or Misty Day, or for that matter Queenie or Nan. It’ll be interesting to see if additional characters from Coven do eventually get released or if perhaps characters from other seasons of AHS will eventually be released. Love or hate Hotel you have to admit that Lady Gaga’s character Countess could inspire some truly amazing doll releases. I have preordered Myrtle Snow for myself via Fabricfriendsanddolls and will be posting a review of her when she arrives!