Groove has announced two new additions to the Creator’s Label line via their blog a short while ago, Pullip Lupinus and Dal Quince. The Creator’s Label line gives Groove a chance to showcase the talents of different doll customizers from around the world by collaborating with them to release a doll based on their designs. This is great for the community because it’s not always possible for everyone to get an one of a kind custom by their favorite customizer due to expense/customizer’s schedule etc but it still gives everyone a chance to own a doll designed by them plus it gives us the chance to see the works of artists we may not be familiar with.

Silver Butterfly has been featured alongside Mitsubachi@BabyBee as a part of the Creator’s Label previously with the releases of Pullip Galene and Taeyang Natsume who the pair collaborated on the designs of, Dal Quince and Pullip Lupinus represents Silver Butterfly’s first time being featured as the sole designer of a doll as a part of the Creator’s Label line. Pullip Lupinus and Dal Quince are said to be inspired by Bisque dolls and they do seem to have a bit of an air of old fashioned elegance about them.

Pullip Lupinus and Dal Quince are to be released in November in Japan, they will be released one month later here in the US (it takes Pullip a little while to travel all the way from Japan!).  The dolls are priced at 20000 yen each which is just shy of $196 as of this writing.
Both  Pullip Lupinus and Dal Quince have quite remarkable eyechips, they are very unique and Groove has never really done anything like this on a Pullip release before. I feel like the eyechips are going to be the most divisive issue with both of these releases as so for people either love them or hate them with very little middle ground. I understand that this style of eye is quite popular on ball jointed dolls and Blythe, I think they could look really great in the right doll and really enhance a doll’s look but to me they seem a bit out of place on such natural beauties as this pair. Fortunately rechipping is easy to do and Groove even sells eye chips as a part of their MIO or Make it Own line of customization products, plus there are countless other eyechip options on the market such as coolcat if the eyes aren’t to your taste. 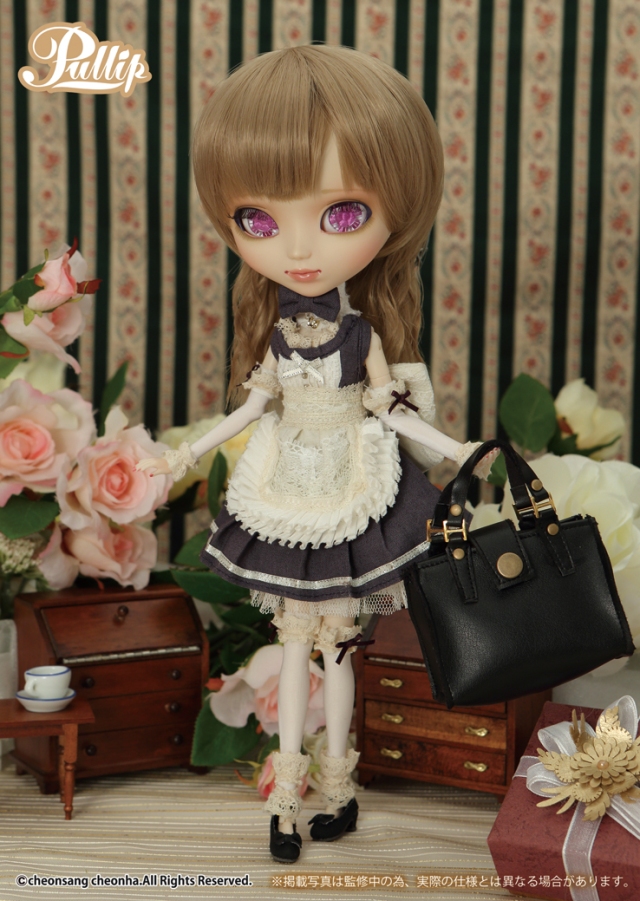 I absolutely love Lupinus! Lupinus’ outfit has a bit of a fancy maid uniform vibe because of the apron while Groove noted in their description that the apron is removable unfortunately they did not include any photos of the halter dress without the apron. The design of the outfit is really great, it’s very nicely detailed and well put together release. While the design is not a more classic maid design like Pullip Stica’s stock design it is still classy and doesn’t veer into the naughty French maid Halloween costume trope which is always a danger, Lupinus looks quite stylish not cheap and tacky like some of the Halloween costumes ^^; . The color scheme is really fantastic too, kind of a soft white and dark grey with black shoes. The shoes even look as though as though they are fabric versus plastic which is much more common these days.

I really love the wig that was used for Lupinus, it’s not really a style we have seen on a stock Pullip before so it is kind of refreshing to see something different and the color is really lovely.  It’s a shorter wig with some gentle waves, it kind of reminds of wigs from Leekeworld which are a very popular rewigging choice in the fan community. 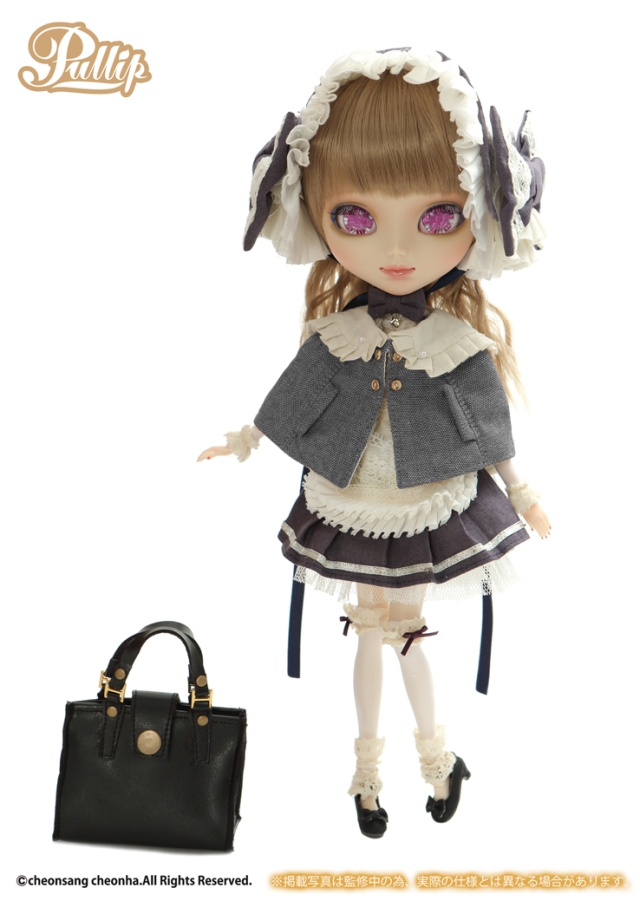 The capelet is a nice added touch that really enhances the outfit, the quality on it on looks nice and it just seems to complete her look really wonderfully. The frilled headdress is also a great accessory and is very detailed. While the bag looks to be of good quality, I question the need for it’s inclusion as it doesn’t really seem to add anything to the outfit it’s just kind of a random accessory especially with it being so oversized .

Back view of the outfit, I utterly adore the little bow on the back of the capelet it’s such a splendid little detail! 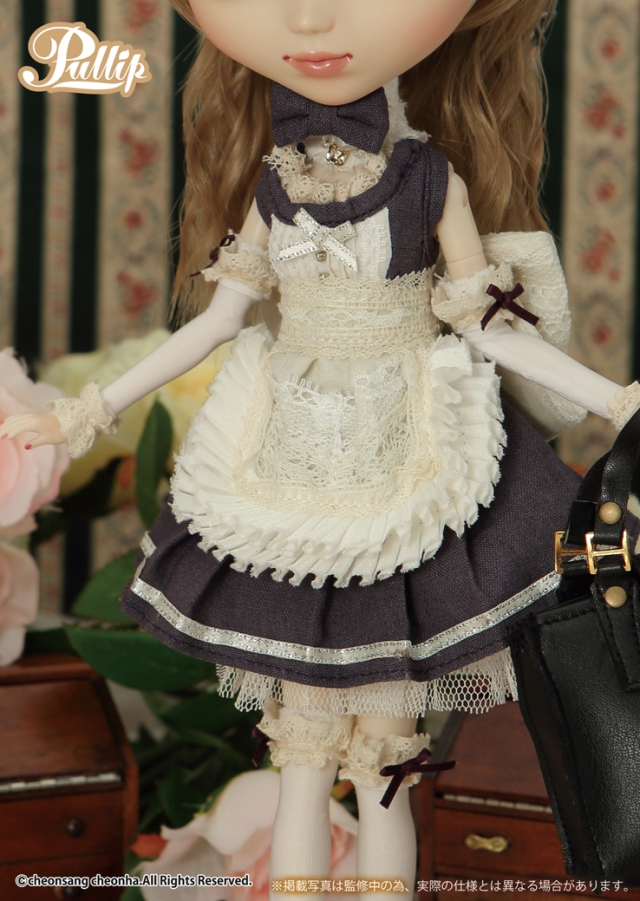 Close up of all the frilly details! Silver Butterfly’s previously designed release Pullip Galene also had lots of exquisitely detailed ruffles and lace in her design so it seems to be a signature of Silver Butterfly’s clothing design.  It appears she as though she has painted nails, they are maybe a dark pink this is the picture that they can be seen most clearly in. 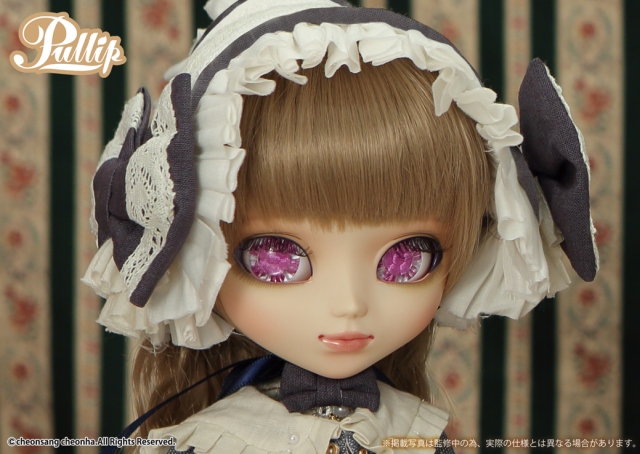 Lupinus is a great natural beauty! She has very full lips that are a nice pastel pink, some subtle blushing on her cheeks and understated eye makeup done in pale brown. She has a very fresh face that isn’t overly done up so she would likely be very versatile outside of her stock look with different eye chips or a wig. The new flower style eye chips almost remind me of jewels, I personally don’t think they suit Lupinus very well but I guess that is a matter of taste it just seems a bit out of place on her which is a pity as she such a flawless release otherwise. 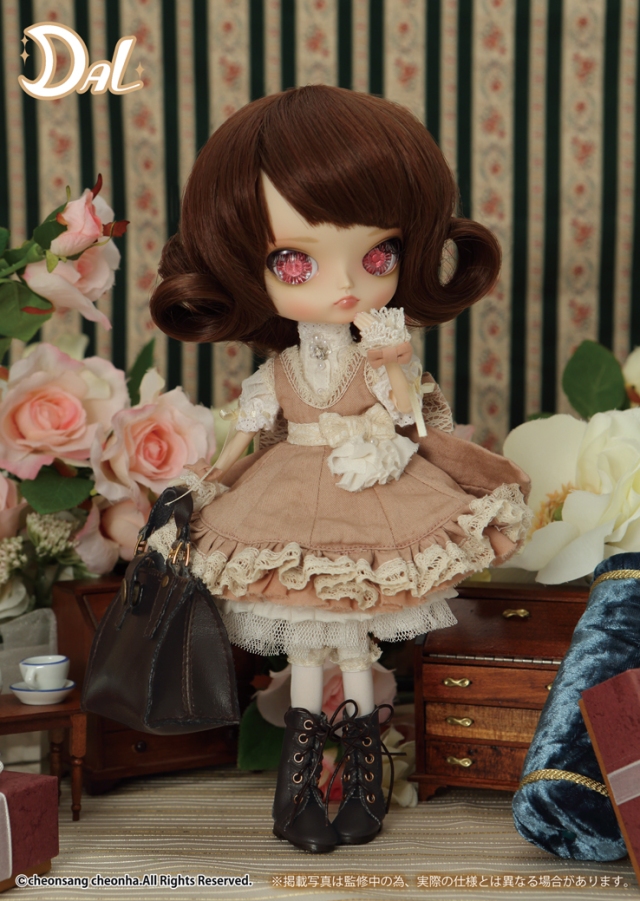 Dal Quince is such a little lady! Quince’s design is incredibly dainty and feminine. The color of her dress is a nice muted pink offset with some beige ruffles and soft white elements as well. I absolutely love the design of her dress, it’s very elaborate but also seems a bit playful as well.

The wig is nice, I like that a short wig was chose for her and the color is a very rich dark brown color. Both the style and the color complement her overall style quite nicely. 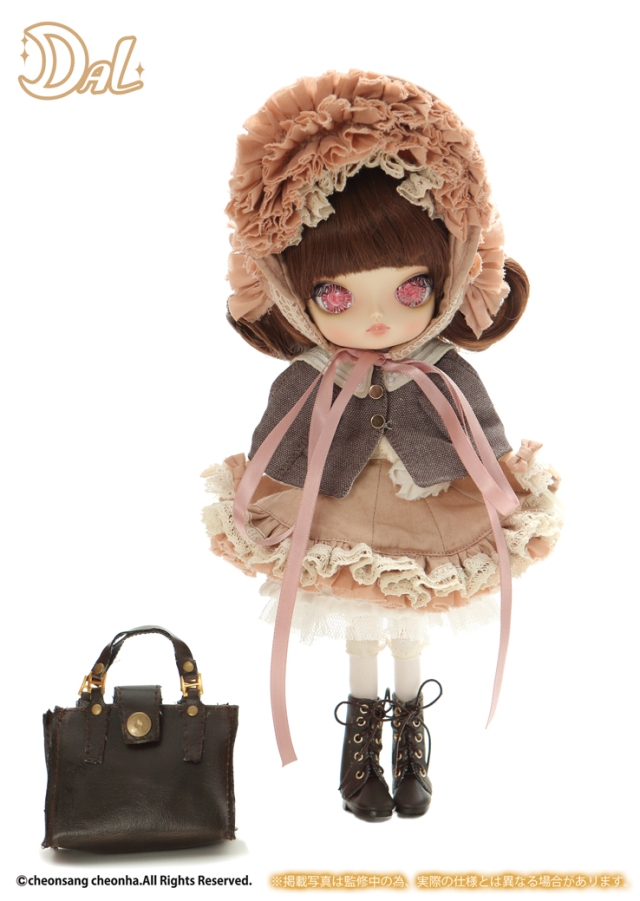 I can not get over all the rows of ruffles on that bonnet, it is just so exquisitely detailed! I feel like the capelet is a bit unfortunate on Quince. While it suited Lupinus nicely Dal’s smaller frame it makes it look as though she is wearing a set of shoulder pads her neck/collarbone area almost seem to complete disappear in the above shot. I wish the silhouette had been slimmed down a bit on the capelet. The bag doesn’t really add anything to the outfit but it doesn’t really detract from it either, it’s just sort of there. 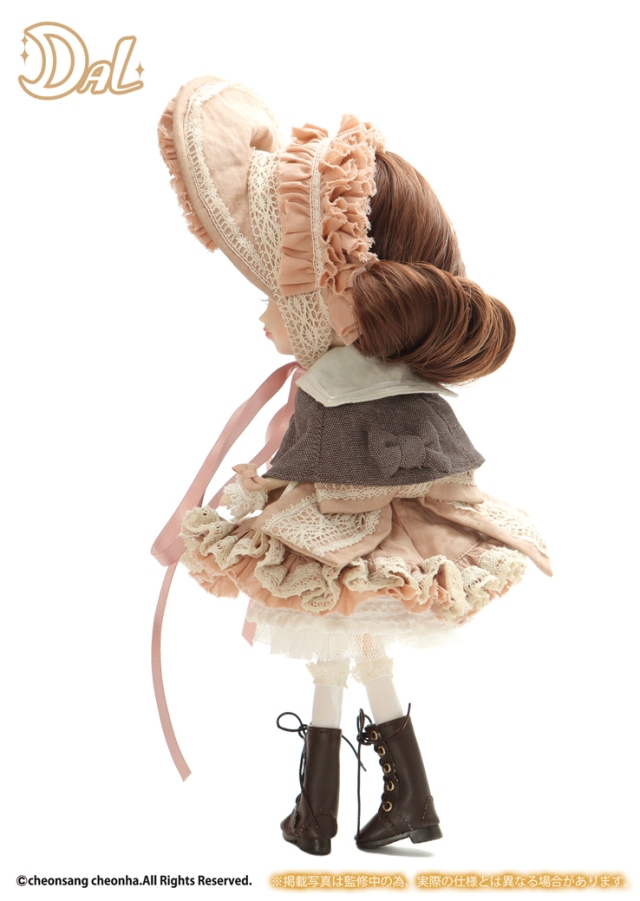 Side/back view of the outfit, once again I am overwhelmed by the sheer craftsmanship in all those ruffles on her skirt.

Let’s look at the dress close up, it’s very detailed with lots of ruffles and some lace. Her blouse has small faux pearls as buttons and there appears to be one on her like belt embellishment as well. I love all of the bows!

Let’s take a closer look at her face up, Quince is a very blushy Dal. Her face up is done up in shades of pink and brown mirroring the colors of her dress and hair. I think her face up is very nicely done, the eye makeup again a bit understated but nonetheless lovely. Her lips are a great shade of pink with a bit of a brown undertone. Quince’s eyes are the new flower design of eye chip, I’m not wild over them on her but they don’t bother me as much as they do on Lupinus maybe the new style of eye will grow on me in person?

I’ll be sure to update here when the dolls become available for preorder via JPGroove and Pullipstyle. I can’t wait for preorders to open for these two as I absolutely adore both releases though I will admit that I already have plans to replace the eye chips on both dolls (Quince will be getting  lovely dark brown eyes and Lupinus will likely receive grey or perhaps a more muted shade of violet eyes). That’s the great thing about Pullips if there is something you don’t like such as a wig or eye chips it is easy enough to change! I hope Groove continues to try new things even if I’m not a particular fan of this innovation, it’s nice to see the effort being put in.