Falling a bit behind again ^^;.  In addition to announcing the upcoming release of Creator’s Label Pullip Lupinus & Dal Quince, Groove also announced the release of Dal Aspin & Isul Eder via their blog earlier today.  Dal Aspin & Isul Eder are going to be November releases in Japan, they will be released one month later here in the US. They have a MSRP of 18000 yen each which is approximately $176 as of this writing or $352 for the pair.

Ever have one of those situations where you think something is pretty or nice but don’t really have a hell of a lot to say about it? I’ve definitely struggled with that with this set, I’ve been delaying doing this write up hoping inspiration would strike as they are cute but somehow I just don’t have much to say about them even though I am glad to see original designs on the release schedule.

The dolls are an original design, they seem to have a bit of a traditional Alpine fashion vibe not dissimilar to previous Dal release Colline who was released way back in April of 2008. Dal Alpin & Isul Eder would definitely look right at home beside Dal Colline on the shelf. 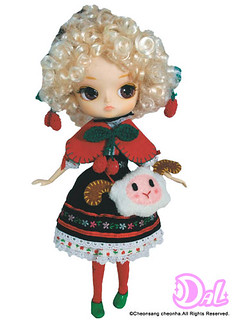 Dal Alpin is a raven haired beauty! The traditional Alpine clothing looks really great on Dal, somehow it really seems to emphasize her youth and innocence. The overall color scheme on Dal is kind of refreshing the dark hair with the red and black looks great and it keeps her from veering into the sickeningly sweet territory (ie. can you imagine this outfit in white and pink?). Dal’s release schedule has become incredibly sporadic in more recent years so  I’m very happy to see so many Dals on the release schedule again.

Back view of Dal Alpin, even from the back she looks pretty cute. I love how the ribbons have been threaded through her braids, it’s a very whimsical touch.

Better view of the dress without the apron. I love the stark contrast of the black and red punctuated by the little bit of white.

Close up of the details on the dress, it’s simple and understated but at the same time it’s got a fair amount of detail. The clogs are an absolutely adorable touch!

Oh my goodness, are those freckles? I absolutely adore them! I think Chenille du Jardinis the only other Dal that has freckles. She is a very blushy Dal, the blushing make her look like she is a bit flushed and breathless from playing outside. Her lips are a nice shade of blushed pink. Her under eye make up is a bit over exaggerated it makes her eyes look wider and makes her look a bit younger than other Dals, somehow it just makes her seem like a wide eyed innocent.  Her eye chips are kind of unremarkable, I think I would have preferred it if she had green eyes but the blue does provide an interesting pop of color.

Isul Elder also wears traditional Alpine clothing but in a more masculine form, his outfit appears to be well made and is incredibly detailed. The color palette is overall a bit brighter than Alpin’s who wears red and black punctuated with white Elder is only wears a little bit of black (socks, shoes & bows) and overall his outfit is a lot more neutral with less color contrast than his “sister” release Alpin.

His coat is really an amazing and interesting piece, the contrast of the different styles of ribbons and brick and brack trim really works well and it pops against the white.

Back view of the outfit and that amazing jacket!

You can really see all of the details here in the close up, the pants are impeccably tailored.

His face up is nice but a bit unremarkable, it’s not a bad face up by any means  it’s just a bit reminiscent of some other Isul releases such as Gosomi. I love the orangey tone of the lips, the shape of his eye makeup is really nice too I appreciate the fact that his face up isn’t overly dramatic and that he looks like a young boy. The honey blond color of his wig is fantastic.

I kind of wish that these two were not being released alongside Pullip Lupinus and Dal Quince, they are both nice releases but I think they are kind of being overshadowed by them which is unfortunate. I hope once they get released they get their moment in the spotlight and we get to see lots of owner photos of Alpin and Elder.

JPGroove has already opened up preorders for Dal Alpin but not for Isul Elder just yet, she is priced at $155.99 and is due in stock for December (he will assumably be priced the same when he is added to the website). I will be sure to update when Elder’s preorders open on JPGroove and when Pullipstyle opens both dolls up for preorder.