Without a doubt, Sailor Moon has become one of the most popular anime collaboration series with Pullip. Sailor Star Fighter was the seventeenth doll released as a part of this collaboration series, the Sailor Stars are often overlooked when it comes to merchandise so I am glad that they were included. Originally announced for a March release in Japan Sailor Star Fighter’s release was delayed a month, we get dolls in the US roughly a month after their US release so she was not released here until the end of May. Sailor Star Fighter’s MSRP was 22000 yen, I recently purchased mine via Pullipstyle for $140 and have very slowly been photographing her on my back porch as my injuries heal from my recent car crash.

If you are in the US and wondering why none of this sounds familiar the final season of the original Sailor Moon anime never made it over to the US, so if you only ever watched on Cartoon Network you missed out. Sailor Moon was always heavily censored in the US and somehow I don’t think the censors could get past the male starlights turning into the female Sailor Stars. Genders or more accurately voice actors had to be changed so homosexual relationships were not portrayed in the case of villains (both Zoisite and Fish Eye were male characters in the original version but were given female voice actors in the US dub) or in the cases of our heroes were merely said to be “cousins” which happened to Sailor Neptune and Sailor Uranus. As much as I hate the bastardized US dub of Sailor Moon without it I and probably countless others probably would not have sought out the original uncut Japanese series. I know for me it was just the starting point it, it opened up the floodgates and over 20 years later I’m still watching anime so Sailor Moon will always hold a special place in my part as my first anime series. 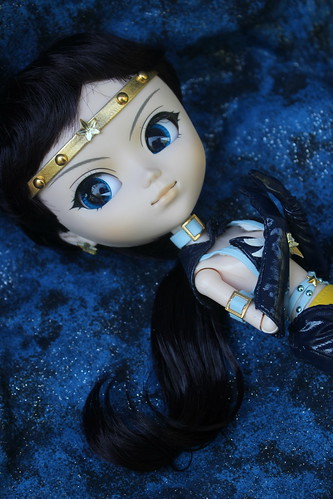 Enough about Sailor Moon , let’s talk about the doll!

Sailor Star Fighter in the box 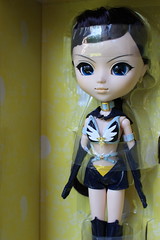 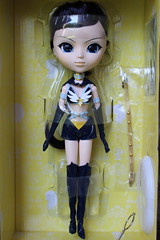 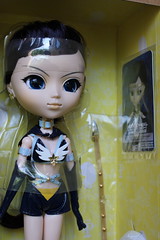 The wig? The quality is nice, it’s very soft although the style isn’t very versatile with a long ponytail in the back. The color is jet black. 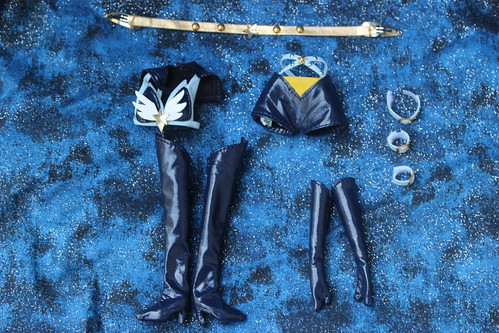 Sailor Star Fighter’s stock consists of a bikini style top with attached sailor collar, shorts with connected straps, gloves, boots, a choker, two arm bands and a tiara/headband. Like the other Sailor soldier outfits the material is vinyl which is kind of something you either love or hate there is very little middle ground. I think the material was a good choice for the Sailor Stars as their outfits in the anime always looked a bit shiny/vinyl-like to me. 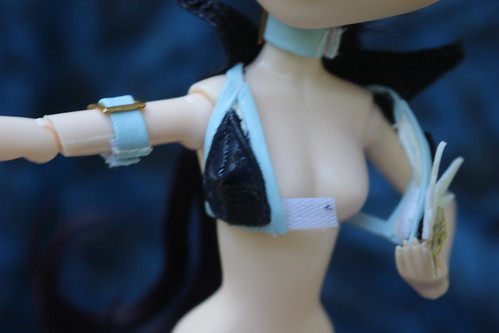 The construction of the top is kind of neat, I was kind of curious about how it was constructed as the there is no opening in the back at all and the outfit doesn’t leave much to the imagination so where are the closures? The top opens in the front and it’s pretty cleverly hidden. I failed to get a good useable picture of this but the straps that crisscrosses her abdomen also works via hidden velcro in her shorts. The tiara is on a set of hair clips which can be clipped in and concealed underneath her hair. 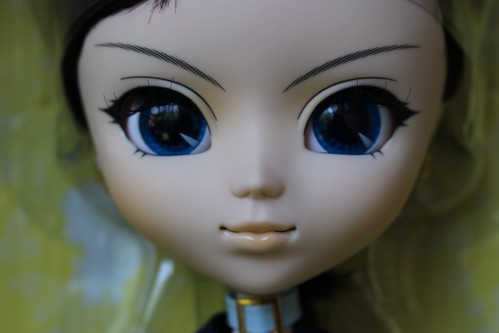 Sailor Star Healer has a really nice stylized anime face up! The makeup is kind of minimal but I think it suits the character design nicely. I especially love her eye makeup and her piercing blue eyes. Her lips are a nice pale peachy color. I like the style of my eyebrows although the ones on mine appear to be a bit asymmetrical, at first I thought I was only imagining it then I was slightly annoyed by it but I have since warmed to the slightly quizzical expression it gives her. 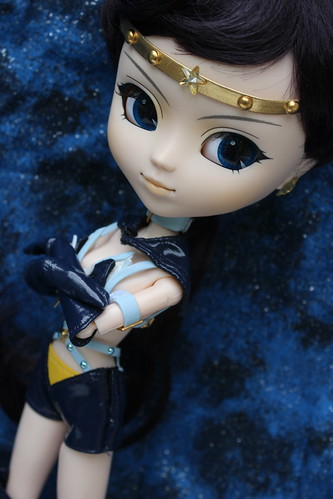 Groove put lots of effort into getting all the details just right, they really did an amazing job translating her character design into doll form. They even took the time and effort to getting her earring correct as well as the studding on the straps across her abdomen. 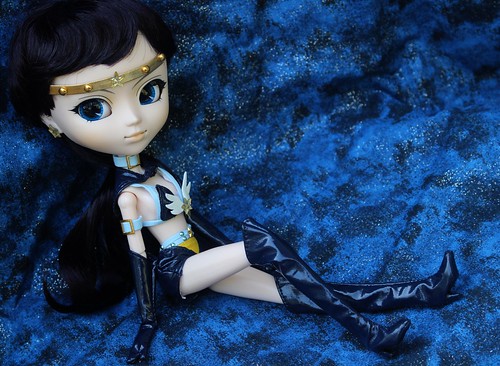 Sailor Star Fighter is the leader of the Sailor Stars so it makes sense that she would be the first one released. She takes her duty as a Sailor Senshi very seriously but also has an adventurous side. 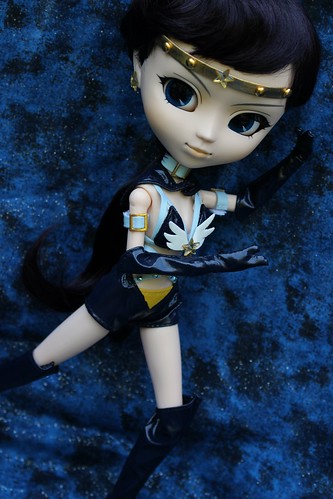 It looks like Sailor Star Fighter is getting ready to use her Star Serious Laser attack. 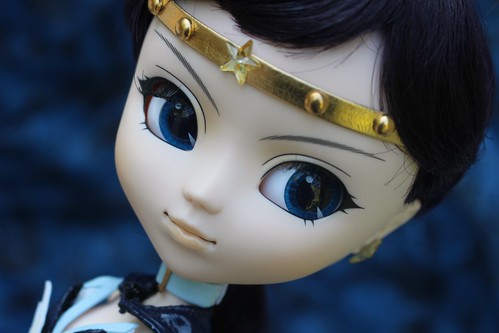 Such a pretty face and those blue eyes! I think in addition to be a great Sailor Star Fighter with her neutral coloring she would be very versatile and lots of different eye and wig combinations would suit her nicely. 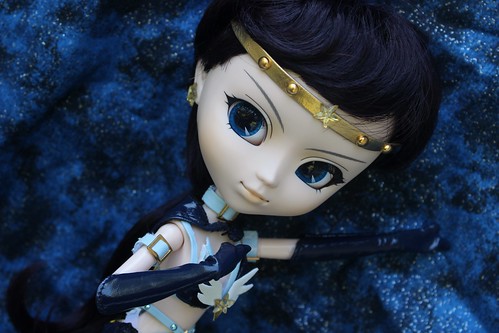 Since Sailor Star Fighter is a singer in addition to a Sailor Senshi so I wanted to include at least one picture posed like a songstress. 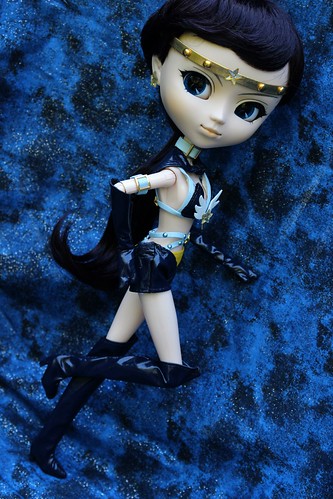 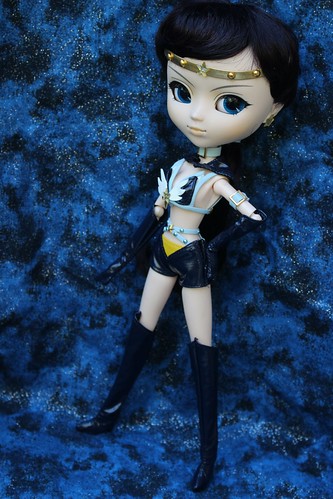 If you would like to see more photos of Sailor Star Fighter please see my flickr. Sailor Star Fighter is currently out of stock on Pullipstyle but she is supposed to be in the coming restock due this coming week! I’m very happy with mine and can’t wait until Sailor Star Healer gets released soon, she was always my favorite character of the Sailor Stars. 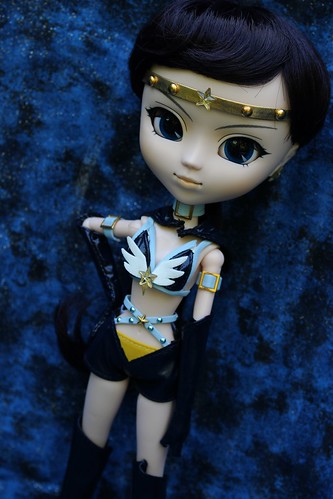 The recovery from my accident has been pretty slow but I have thankfully been able to at least go outside with the walker and some assistance and have been enjoying being able to take photos again albeit at a very slow pace.