I recently mentioned here that JPGroove was having a sample sale where they were downsizing some of their display dolls that were previously used for display at events such as SDCC. I may have also mentioned that I bought a few things from the sale…… 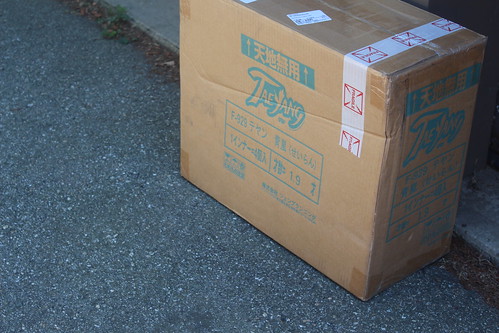 My package from JPGroove arrived yesterday afternoon, okay I should probably admit that I may have bought more than a few dolls ^^; . I honestly haven’t really bought many new Pullips this year and the sale was a really great opportunity to get several dolls that have been languishing on my wishlist for a long time, in some cases years. So what did I buy from the sample sale?  Quite a few things… 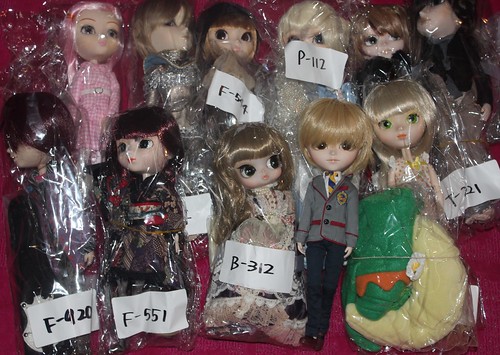 The top row consists of a yellowed Pullip Oren that Requiemart and I will be using to experiment with various de-yellowing methods that we will hopefully be posting a tutorial on, Taeyang Twilight Destiny, Pullip Rovam, Pullip Princess Cinderella, Isul Nekoneko Mao and Taeyang Natsume. The bottom row has Taeyang Lead, Pullip Lan Ai, Byul Romantic Queen, Isul Cedric and Pullip Paja. It was entirely unintentional on my part but somehow I can’t help giggling when I look at this photo because of Byul Romantic Queen staring at the oblivious Isul Cedric. This was definitely my biggest dolly mail day, in my defense a couple of these are supposed to be for Requiemart.

It was stated in the terms of the sales that the dolls would not come with their stands (I assumed no boxes) and may possibly be missing accessories. The dolls all arrived in great condition, there were no stands/cards/boxes included. I recycle the boxes and I have plenty of stands so them not being included was not a terrible loss for me, at least. Missing items were pretty minimal overall, I had expected Natsume’s cello to not be included but it actually was! It was hilariously somewhat fitting that I could not find one of Pullip Princess Cinderella’s shoes, fortunately it had somehow just wiggled out of her packaging and was sitting at the very bottom of the box. Paja’s slippers and Paja mug were missing as well as Natsume’s chair and a couple of items from Twilight Destiny. 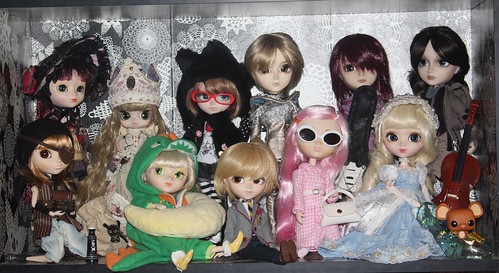 Here’s everyone after I finished checking the different dolls’ condition and to see what/if anything was missing. Needless to say I will be quite busy with reviews/photos for quite some time. I absolutely could not be happier right now, especially about Pullip Princess Cinderella. I had almost completely given up hope on getting her as she sold out much quicker than I anticipated, I thought I had missed my chance at getting her I’m so happy I have her now!

There are still a lot of really great dolls available via the sample sale so check it out while you still have the chance!

Desperately seeking Sala! As a note, one of my friends received a Pullip Sola instead of a Pullip Sala by mistake during JPGroove’s other recent sale. If you ordered Pullip Sola and received Sala, please leave a comment here I can get you in touch with your counterpart!

Also, I received a spare Lan Ake bonnet packaged in with my Lan Ai so if someone bought a Lan Ake via the sample sale and did not receive their bonnet please contact me!