Who is HIDE? Hide was a Japanese musician, originally he was part of the band Saver Tiger (originally Saber Tiger) eventually he joined the band X (later renamed X Japan) and became their lead guitarist. X Japan was one of the founders of the visual kei style, where band members would dress up in outlandish ways with wild hair and make up. Hide had started a solo career while being in X Japan, after the band broke up he continued to focus on Hide with Spread Beaver (his touring band) as well as founding the band Zilch before his untimely death in 1998. Hide’s popularity has endured to this day, so much so that Groove has released a number of collaboration based off of his appearance over the years. Beginning in 2012, Groove released three different Taeyang dolls as well as a limited edition variant of one of the dolls based on Hide’s likeness. All three were based on some of Hide’s different, iconic looks from over the years:  Hide Doubt version (as well as the limited version of hide Doubt version) were based on how he appeared in the music video for Doubt off of his first solo album “Hide Your Face”, Hide rocket dive version is based off of hide with Spread Beaver’s 1st single ”ROCKET DIVE” and finally Hide PSYENCE version based on hide’s appearance during the PSYENCE a Go Go tour. In late 2018, a 20th Anniversary Memorial version of Taeyang was released and was exclusively sold through Hide official shop LEMONed and then again 2019 a new version called Hide Tell Me Version was released a based off of his appearance in the Tell Me music video. All and all, we have had five different versions of Hide (plus one limited variation) released based on his appearance during different parts of his career.

The new 6th version of Hide is being released in honor of the 23rd Anniversary of his X band works in the early stages of his career from 1989-1992. I feel like of all the Hide dolls released so far, this one most embodies the Visual Kei style and it’s obvious that a lot of effort was put into recreating his unique style in doll form. His Sally costume has been lovingly recreated and he will come with 3 types of stoles, 4 types of shawls and 3 types of necklaces as well as his 1/6 recreation of his favorite guitar Ameba.

The new Taeyang HIDE The First Era -Sari- Version has a MSRP of 27500 yen which is approximately $254.75 as of this writing. He is limited edition and will only be available through select retailers include Hide’s official shop LEMONeD Shop, Groove’s official Japanese Store and JPGroove here in the states. It appears that Pullipstyle will NOT be able to offer Hide for sale so if you do want to add him to your collection please act now and order through Groove or through Hide’s official store! JPGroove is expected to have Hide in late April for those who preordered it is not clear at this time if there will be any excess so again please make sure you preorder!

Close up of some of Hide’s details, he does appear to come in a slimline box which we have previously seen for some of the SDCC/NYCC exclusive dolls (and Amelia) there really is an extraoridinary amount of detail on this doll!

All of the previously released versions of Hide, I love that while each is Hide they are all based on very unique looks from the various phases of his career. I am fortunate enough to own both of the newer versions of Hide, it is definitely one of my bigger regrets not to get the earlier versions but at that time I was less focused on collecting Taeyang/boy dolls in general. I’m hoping to be able to add this new version of Hide to my collection but I also have a lot going on right now so we shall see! 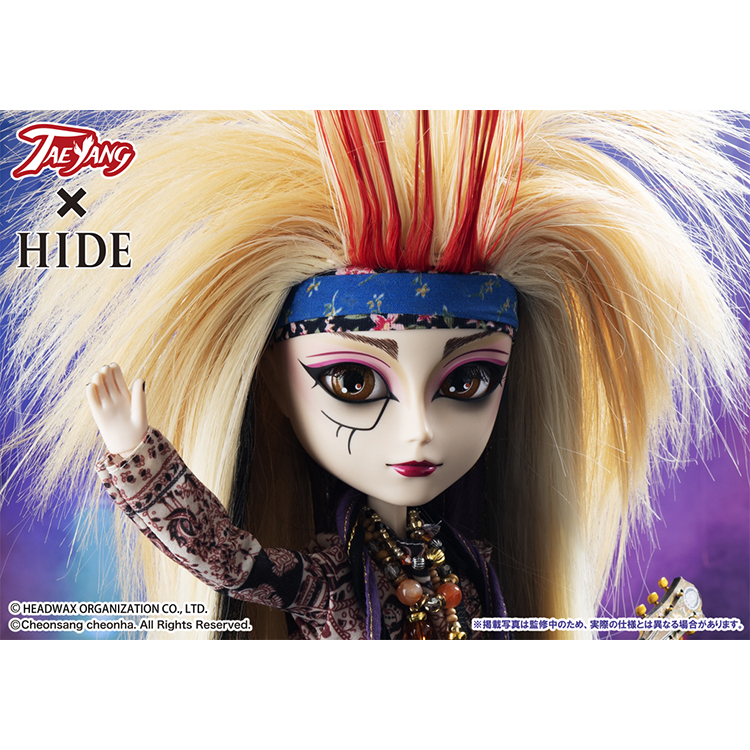 Don’t miss your chance to add this amazing version Hide to your collection, preorder yours today!