Groove announced the second and third doll in the Disney Doll Collection via their blog a few days ago now, I apologize on my tardiness on getting this written up but I’m in the middle of a cross country roadtrip with limited internet access ^^; . Earlier this year, Cinderella became the first doll released as a part of this new series she still has yet to receive an official release here in the states though.

Disney’s Beauty and the Beast was released in 1991, I would have only been about seven years old at the time and I remember going to see it in theaters and that it quickly became one of my favorite films as I too was a brunette that liked to read. A live action remake was made earlier this year that I have somehow managed to not see despite the fact that I have an eight year old daughter that loves Disney movies. I was very excited to see that Belle and Beast were announced as the second and third dolls to be released as a part of this new Disney series, I’m particularly surprised to see a boy doll announced so soon as the male characters are often overlooked when it comes to making dolls but then again I can’t even remember most of the Disney Princesses beloved’s names so perhaps they don’t matter as much as the princesses after all?

Belle and Beast are to be released in October in Japan, it is not known at this time when, how or if they will be distributed within the US. Belle has a MSRP of 20000 yen while Beast has a MSRP of 22,000 yen but since he does come with some extra stuff I feel his slightly higher cost is justified. Both dolls are already available for preorder via Groove’s official Japanese store Rakuten please see their respective links Belle and Beast .
It is important to note that though Belle and Beast look like Pullip and Taeyang they are never referred to as such by Groove, they are instead referred as a part of the Doll Collection line or as ” “Big Head Doll” that expresses characters in hair, make-up fashion,to a body that has a wide range of motion and is capable of various poses.” as they did in Beast’s listing on their store website link.

Belle’s iconic yellow ball gown has been lovingly recreated, this dress has always been my favorite of the Disney princess gowns there is just something about that bold daffodil color. In comparison with Cinderella, I feel like Belle may be the more successful recreation of the two her dress looks to be better quality than Cinderella’s.

I think that the dress even manages to look pretty impressive from the back!

Belle looks she like she is lost in a daydream, maybe about one of her books?

Belle has a pretty face up, I particularly love her pale pink lipstick and blushing. The eyeliner is done in a bit of an unusual shade that we normally don’t see on Pullip. She seems to have a bit of a shy but earnest expression. I wish that they would have used different eye chips because when I think of Disney, I think of large expressive eyes I would have loved to have seen eye chips similar to those used in Creator’s Label Pullips Cassie and Callie used for Belle (a picture of which can be seen here) as I feel like they would have been truer to the Disney design. I think that different eye chips could have really made her face up pop more.

When Cinderella was announced I began thinking about what other Disney characters could be potentially be produced and remember thinking about how they would accomplish making the Beast if they ever produced one. Taeyang Cowardly Lion from the Wizard of Oz set had a weft of hair glued around his face to make it appear as though he had a mane and had a very animalistic face up which is fine if you like the Cowardly Lion but it was not exactly the most versatile doll out of his stock clothing unless you were a big fan of the musical Cats, maybe? I was hoping that they would employ the use of a mask so that Beast would not be as limited range-wise so I was overjoyed when I saw the promotional photos of Beast and saw that he did indeed have a mask. I honestly think that they did a pretty good job of recreating his monstrous appearance as a mask, creating masks for dolls can be tricky as it needs to look good as well as still being functional not to mention that it is something that has to be mass produced as well as fairly small. 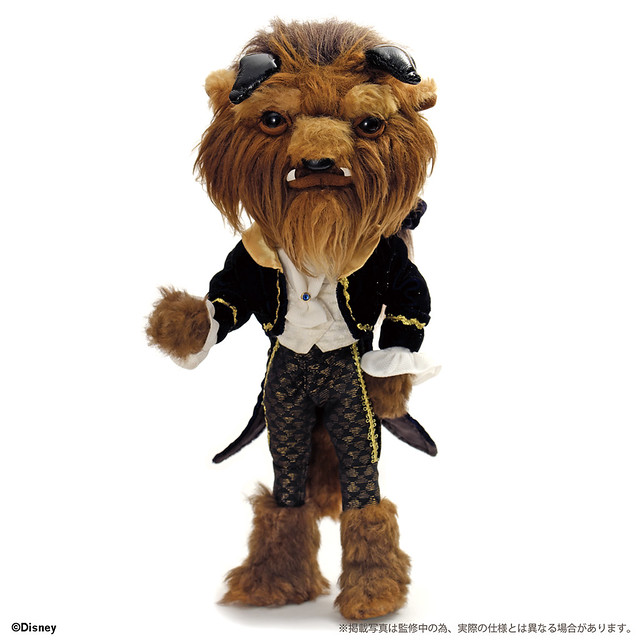 The Beast appears to come with boot covers and gloves as well as a mask to complete the illusion.

Beast’s suit appears to be padded out a bit which makes sense when he is in beastly form as his frame is so large trying to squeeze into his regal clothing but when he doesn’t have the mask it makes him look a bit portly which I personally think is a bit amusing as it’s something we don’t really see that often.

While I am thankful that they made the Beast head a mask, I think I may actually prefer him with the mask on versus without; I’m not sure if it’s just because we see a lot more of Beast throughout the film than Prince Adam who we really only see as an adult for the last few minutes of the film and somehow I’m just used to Beast more or if it’s the combination of the wig and face up.  While I do really like his lips and brows I’m not a big fan of the shadowing around his eyes it almost makes him look a bit sickly.

The above picture was taken from the Disney Wikia and is from the ending of the film, I’m not sure what is going on with his wig I assume that the overly pronounced pompadour is helping keep the mask keep it’s shape but it seems a bit over the top to me as his hair nowhere near as big in the film.

I will be sure to update once more information becomes available about the release of Beauty and the Beast!