Ever since the Sailor Moon x Pullip collaboration series was first announced, I had been hoping that an Eternal Sailor Moon Pullip would be released. Eternal’s outfit has been faithfully recreated by Groove, I’m impressed by the level of detail that has been achieved. Eternal Sailor Moon features a triple tiered skirt in yellow, red and blue, while I know it isn’t the proper term for them I love her “bubble” sleeves that she has her in Eternal form as well as her wings! 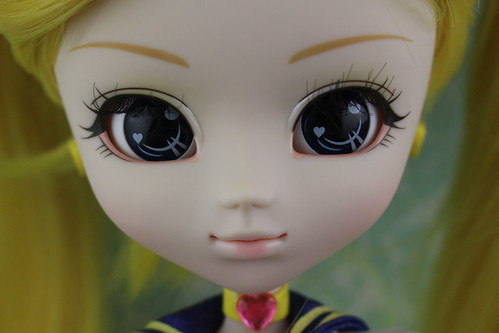 Pullip Super Sailor Moon’s face up photo for comparison. The eye makeup appears to be identical but the lips and the eyebrows might be a little different, the most notable is the addition of the moon symbol on the forehead as Eternal Sailor Moon does not have a tiara like the other forms of Sailor Moon.

My only complaint is that Eternal Sailor Moon does not come with her Eternal Tiare wand that she used during the Sailor Moon Sailor Stars series, I know I shouldn’t really be surprised by this as only the original version of Sailor Moon came with her wand none of the other dolls came with any of the weapons/wands they really should have Sailor Saturn for example should have came with her glaive.

Back view of the outfit!

Bandai Shop once again has a bonus school uniform clothing set exclusive available only to those who order from them. The MSRP for the exclusive version is 3000 yen higher than the standard version for a total of 25,000 yen and can only be preordered here (if you are outside of Japan you must go through a proxy to purchase from Bandai Shop).

Eternal Sailor Moon comes with Usagi’s Juuban Municipal High School uniform, at the beginning of the the Sailor Moon Sailor Stars manga/anime Usagi and most of her inner senshi friends all begin attending the same high school with the exception of Rei. I always really liked this school uniform, I really hope that Groove starts making the outfit sets available for separate purchase as I would love to have one of these school uniforms for Ami, Makato and Minako as well.

I will be sure to update when Eternal Sailor Moon becomes available for preorder!