4 Most Exciting Pullip Related Things of 2016

As 2016 draws to close and it looks increasingly unlikely that any additional dolls will be announced for a 2016 release by Groove, I wanted to take a moment to look back at some of the most exciting or noteworthy things to be released by Groove this year!

Something of note before we get started, I know going into this that not everyone is going to agree with every entry on this list and that at least one entry on this list is controversial but that doesn’t mean that it isn’t noteworthy.

1). Pullipstyle Exclusive Pullip Amelia- Can I be a bit cheeky and start with Amelia? After a clever marketing campaign on their facebook page Pullipstyle finally revealed a new exclusive Pullip, Amelia! Amelia is Pullipstyle’s second exclusive, back in 2012 they released an exclusive Pullip Froggy who was based on the classic little Pullip release of the same name. Pullip Amelia was notable not only for being a Pullipstyle exclusive but because for the first time ever a Pullip was designed by two US Pullip collectors Requiemart and myself.

Amelia was designed with the older classic Pullip releases in mind, we wanted her to have a strong personality like the older releases. I don’t think anyone ever imagined she would be quite so popular but we are elated that she is so well received by the community, I was especially excited to see owner photos of her from Pullip collectors that I haven’t seen buy a new Pullip in years. It was great seeing so much excitement for a Pullip release, she even set some new records for Pullipstyle she had the highest number of preorders of any doll released to date and is their best selling doll release of 2016. As a note, if you haven’t already purchased Amelia she is still available as of this writing via Pullipstyle here she is limited to 400 so if you haven’t bought her already I wouldn’t put it off for too much longer!

2). New Eye Mechanism Function/Pullip Cheshire Cat- Groove debuted a new eye mechanism with Pullip Cheshire Cat in Steampunk World starting with Cheshire Cat’s release all subsequent Pullip releases (with the exception of Pullip Taffy) will be able to have their eyelids in three different positions open, partially opened and closed. I actually really like the new partially closed option, it subtly changes Pullip’s expression and gives her a bit of a knowing look similar to the Type 1/Type 2 Pullips.

Even without the new eye mechanism feature being included, Pullip Cheshire Cat in Steampunk World is kind of notable for being the first full sized Pullip Cheshire Cat release even though we have had upteenth different Alice Pullip released over the years, also she is just straight up a gorgeous Pullip release and is sure to be one of this year’s most popular releases alongside Amelia.

3). Mocha MIO Kits– The Pullip community has been hoping that more diverse skin tone options such as tan would be released since the Pullip MIO or Make It Own kits were announced. Finally this spring the Pullip community’s prayers were answered, MIO kits were released in a lovely dark tan or “Mocha” skin tone that was roughly equivalent to former Pullip release Pullip Nahh-ato. 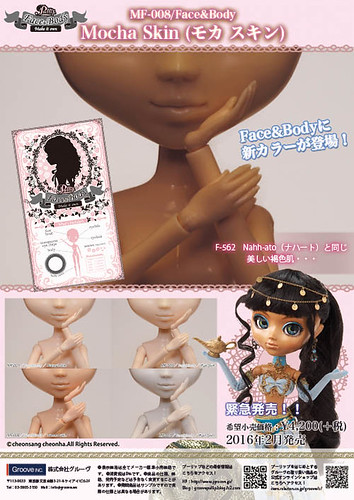 4). Veritas Special Version- I will conclude this list with the most controversial Pullip release of the year, Premium Pullip Veritas Special Version. I think it was the entire Pullip community was in universal agreement that the new version of Veritas was a gorgeous doll. Unfortunately for Pullip fans everywhere, she was exclusive to Ars Gratia Artis, limited to only 50 dolls and her price was extraordinarily high. She was initially available at the discounted price point of $405 but that was only for a limited time only her price eventually rose to $450 which gave her the distinction of being the most expensive Pullip released to date. I was honestly kind of shocked that she did manage to sell out at that price though I have still yet to see any owner photos (no I did not order her).

Tan Pullip dolls are still something rarely released so to make such a gorgeous tan doll and have her be so limited with her price point set so high seemed like a cruel joke as she become unattainable for the vast majority of Pullip fans. I don’t really fault Groove for Veritas, nothing about her from a production standpoint looks like she would cost that much more to produce than the Premium Pullip Veritas Crimson Version I feel like AGA didn’t really take into consideration fans of Pullip when they decided to set her price point so high. Here’s to hoping Groove is able to widely release a mocha Pullip soon so more fans of Pullip have a chance to enjoy a gorgeous tan Pullip.

I’m excited to see what Groove will do will do next year, the few releases from 2017 we have seen so far seem promising!

1 Response to 4 Most Exciting Pullip Related Things of 2016