I recently purchased Dal Kleine from one of JPGroove‘s Sample Sales, I had originally bought Dal Kleine shortly after her release but I had split her and I kind of regretted not keeping her stock though she does make a very cute Alice Dal. I never did do a write up of her so I am going to take this opportunity to do so! 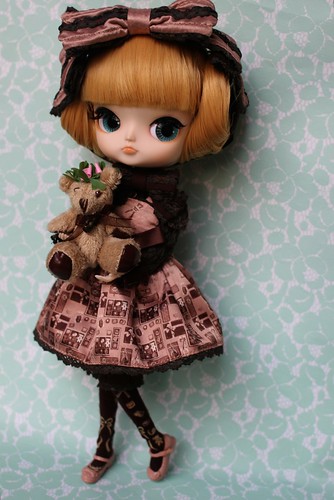 Don’t treat me like baby… Mr. Bear and I are grown ladies!!
I purchased Dal Kleine from JPGroove’s most recent Sample Sale which means I just received the doll with no box, card or stand so unfortunately I do not have any box photos to share of her. She normally comes with a card as well as a plastic gold stand. 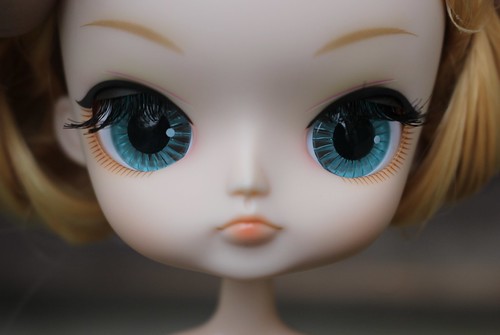 Kleine’s face up is nice, it isn’t the most Dal remarkable face up but the colors chose for it kind of elevate it a bit. I love the peachy tone of her lips, the eyelashes are done up just a little darker than her hair color they are nicely detailed and the color choice is great. The clear blue eyechips are such a great pop of color and it really contrasts nicely with the more peach tones of her face up. 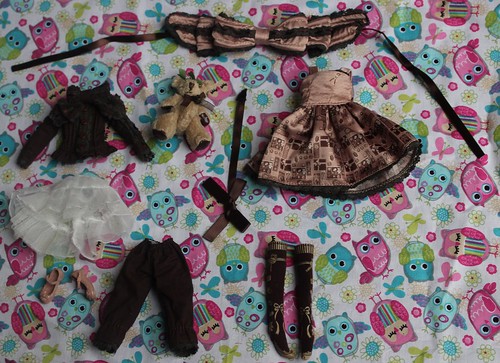 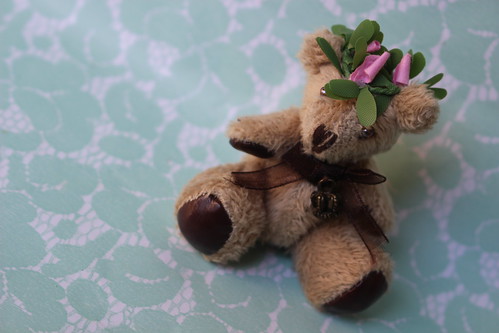 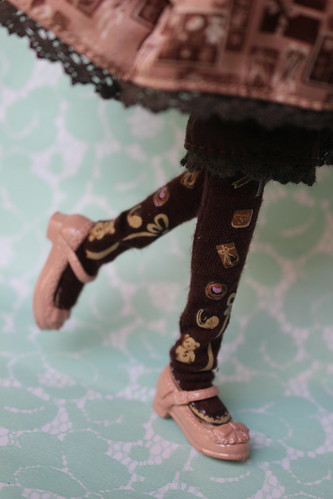 Such adorable little shoes, for plastic shoes they are really quite detailed! The designs printed on the socks are quite nice too: candy, teddy bears and ribbons oh my! 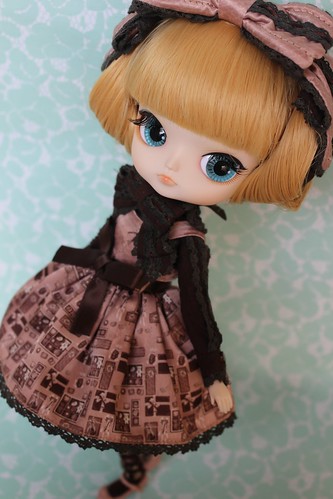 I love the Chocolate Teddy Bear print on the dress, the various assorted boxes of chocolate with the little chocolate teddy bears is very cute! 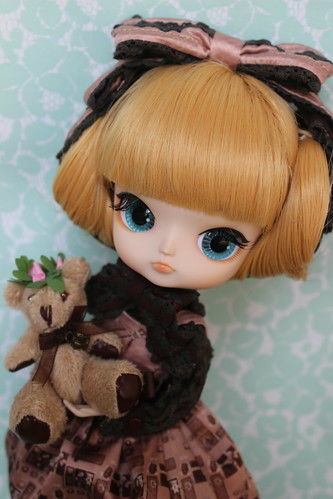 I really love the color of her wig, it’s a nice golden blond. Her hair is sewn into this style, I’m not quite sure how to describe it properly her hair is separated into three ponytails (one on either side and one in the back) and they are kind of tucked up into buns giving her a bit of a Princess Lea look from Star Wars from the front. If it is taken down it stays curled as you can kind of see in this picture here. 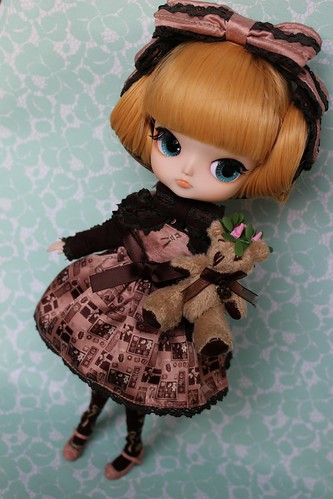 I really love the color palette that was chose for Dal Kleine, the contrast of the rich chocolate brown works really well with the kind of muted pink of the dress, bow, detailing on the socks and shoes. I’m normally not a big fan of brown and pink together but in this case I think it works really nicely. I will say that I am happy that her wig is a nice golden blond, I feel like if it had been brown the color would have been too overwhelming and made her look a bit drab the golden blond really brightens up her appearance. 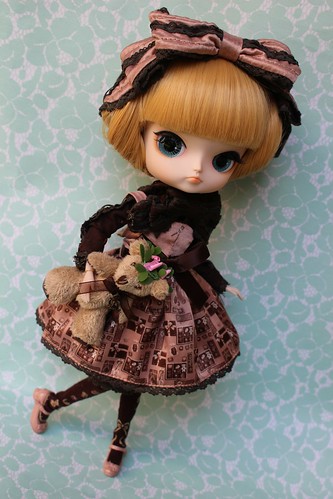 Kleine is a German word for small, it is often used to describe a child eine hübsche Kleine would be a pretty little girl for example. Dal Kleine is a little lady so the name suits her really well even if she likes to think of herself as more of a grown up. 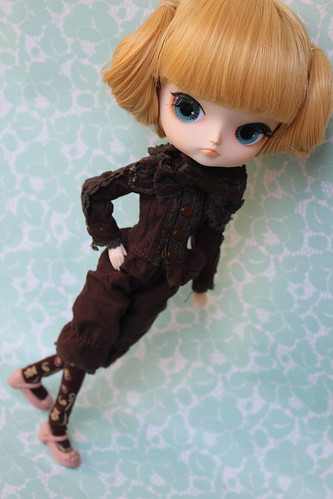 I wanted to include a picture of Kleine in just her shirt and bloomers, the details on her shirt are incredible from the oversized bow to the detailing on the sleeves it is just very well done and I feel like most of the details just get lost underneath the dress.  The bloomers are a nice touch, they are cute but kind of unremarkable. 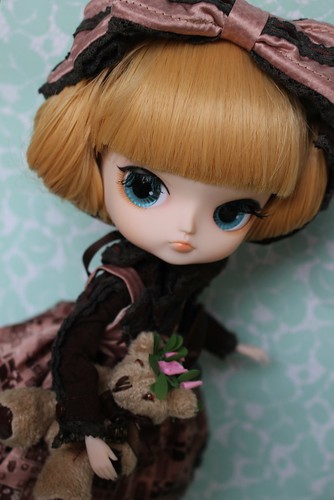 I actually did the math out for how much the actual outfit would cost from Innocent World with the bear, if my guess is correct about the shirt the outfit not including shoes would have cost 78,150 yen or about $770 at current conversion rate. Compared to how much the human sized version of the outfit would have cost, Dal Kleine herself seems like a steal at 15,000 yen now ever more so as she is on special at Pullipstyle for a mere $79.95. Kleine would definitely enhance the outfit from Innocent World if you already own it but on her own she is very cute and innocent looking and would make a good addition to many collections especially if you love lolita clothes! I personally do not wear dresses (last time I did it was white and it had a 18ft train, if I am going to have to wear a dress it will be the most overtly feminine one I can find) but I love looking at them especially when they are such tiny, well detailed replicas as Kleine’s dress. 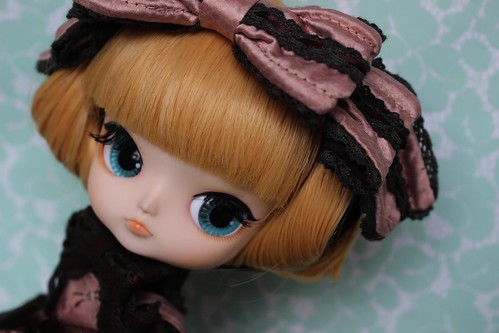 Such a darling little girl, somehow she just looks so innocent. 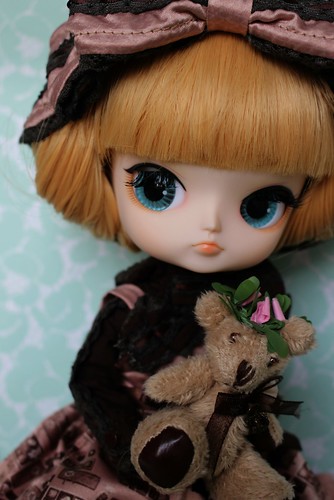 More photos of Dal Kleine can be seen on my flickr account here. Dal Kleine is currently available for purchase via Pullipstyle as a part of their oddly named Friday sales special as well as via JPGroove where she is also currently on special. I hope you have enjoyed this review, auf wiedersehen for now! 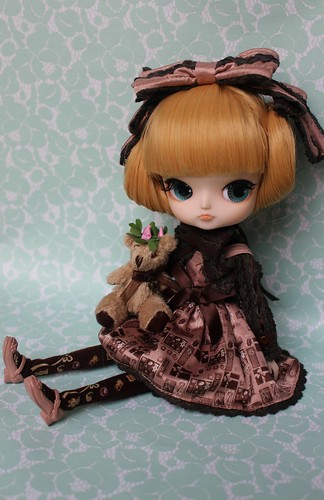