Groove recently released a set of matched twin Pullips named Cassie and Callie. The twins are part of the Creator’s Label line where Groove partners with different customizers from around the world to bring us dolls in that customizer’s style, Happy Dolly and Memento are the designers of Cassie and Callie. Happy Dolly designed the face ups of the twins while Memento designed the stock outfits for the twins. Happy Dolly and Memento previously collaborated with Groove before to release Isul Glen back in 2013 as a part of the Creator’s Label line. Pullips Cassie and Callie were released back in May of this year, they are now both in stock and available for purchase via Pullipstyle & JPGroove. The twins have a MSRP of 20000 yen each. 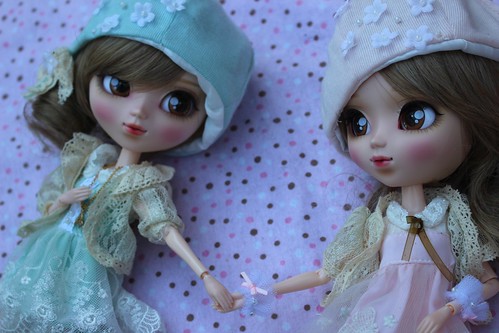 A few months ago now, I unexpectedly both of the twins as a gift. At first I thought about side by side review of them but I came to the realization that it would be a tremendous disservice to both of them and they each needed their own moment in the spotlight and that only after I have posted reviews of both dolls would I do a post focusing on the two as a pair. Pullip Cassie has already been featured here recently so now it is Pullip Callie’s turn! Pullip Callie is the twin in pink. 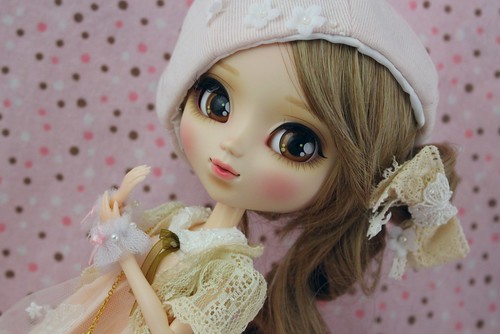 On a lovely day in spring…. I put on my be loved dress, wear little makeup…. Then grab my bag and go shopping with my sister…. We love to sit around and have some cakes at a cafe….. Ah! So Happy❤…..Feel Like So.

I was unfortunately so excited about the surprise arrival of Pullip Cassie and Callie that I didn’t think to stop to get box shots of them before freeing the pair from their boxy prisons. I didn’t even think of grabbing my camera until Pullip Cassie was entirely free from her box and Pullip Callie was mostly deboxed. Both of the twins came with the standard card as well as a white plastic stand. 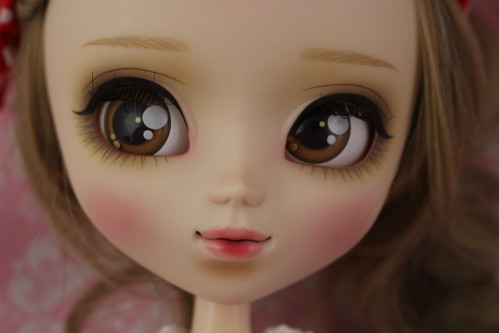 Over time many customizers develop a signature style, it’s something unique that they do with their customs or maybe they just do something in a different way but if you see a doll with that feature you immediately think of that customizer. Happy Dolly’s signature to me seems to be very blushy and detailed face ups, both of the twins and Isul Glen before them have really intense and vibrant blushing. Callie has lovely pink blushing on her cheeks as well as some brown contouring blushing underneath her lips that really accentuates her face nicely. The under lip blushing also helps to give the impression that her lips are quite full or pouty more so than is usual for Pullip even though it’s the same headsculpt as other type 4 Pullips, it always amazes me how much Pullips’ features can be altered just with different ways of painting the face up. I absolutely love her lips, there is a gradient in color from softer pink to more intense pink on the bottom lip and the softer pink to an even lighter pink on the upper lip somehow it makes her lips look like she just got done putting on lip gloss! Her eyechips are done in the shoujo or girl comics style, they remind me of like starry eyed innocence. The eye make up is very intricate and detailed. I really enjoy the shape of her eyebrows and the color matches her hair wonderfully. 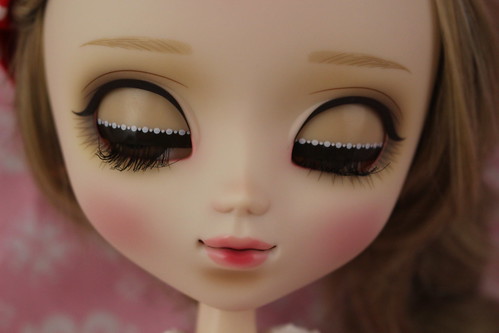 Callie has gorgeous eyelids, the design on them reminds me of the faux pearls used to accent her stock outfit. 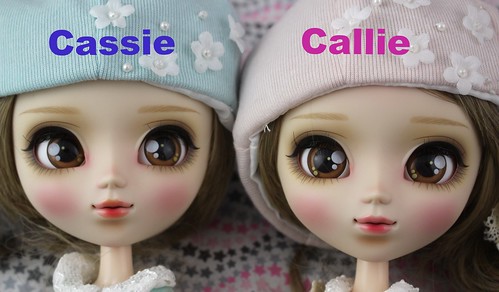 Here is a side by side comparison of Pullips Cassie and Callie’s face ups, at first glance it is easy to dismiss them as being identical but if you look closely there are some differences. Pullip Cassie’s lips have more of an orangey tone to them than Callie’s which are more of a true pink. Though the shape is the same, Callie’s eyebrows are higher up than Cassie’s, I think the eyebrow placement is honestly what had given me the initial impression that Callie was the younger of the twins as kids always seem to have higher eyebrows to me than adults. They appear to have the same eyechip but the placement is reversed ie. the eyechips have been spun around inside the eye mechanism and are facing the opposite direction. 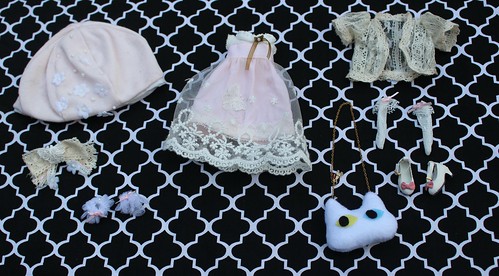 Pullip Callie’s stock consists of a babydoll dress with lace, a cardigan, a hair bow, wrist accessories (honestly not sure if these qualify as corsages or not?), a hat, a kitty purse with real metal chain and an Eiffel tower accessory, socks and shoes. The dress and hat are a lovely pastel pink. The hair bow, lace on the dress and cardigan are all an off-white color while her wrist accessories, details on the hat, kitty purse and her socks are all more of a stark white it provides an interesting contrast and makes the white seem that much brighter. I was very pleased with the quality of the stock, everything was well-made and the details are really nice I really enjoy things like the little pearl details on the hat and wrist accessories. The pieces of her stock outfit should be pretty versatile, I could see things like the cardigan being useable in a many dolly wardrobes. 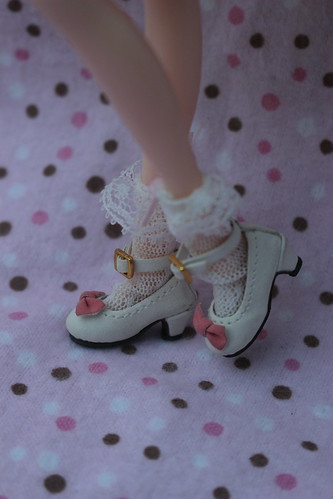 I have an admitted weakness for well constructed doll shoes, the design of the shoes is really nice and they fit her perfectly! I love the dark pink bows on the shoes, it provides an interesting pop of color. I really appreciate that Groove did not go the easy route of using one of their normal plastic shoe molds for her. 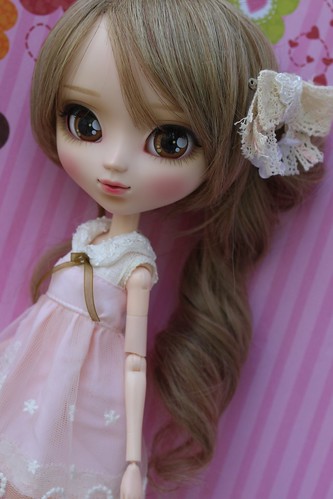 What can you tell me about the wig? The wig is kind of a sandy brown, it’s actually subtle mix of a few different shades of brown some lighter, some darker. The wig is fairly nice quality, it comes pre-styled into a side ponytail with a few tendrils of hair escaping on the side. I generally dislike curls as I find them hard to maintain but I think it with her hair being pulled into a ponytail it isn’t so bad this time around. The only thing I do not care for about the wig is the placement, it seems a little too high to me it doesn’t bother me as much when she has the hat on but you can see a lot of forehead when she doesn’t. 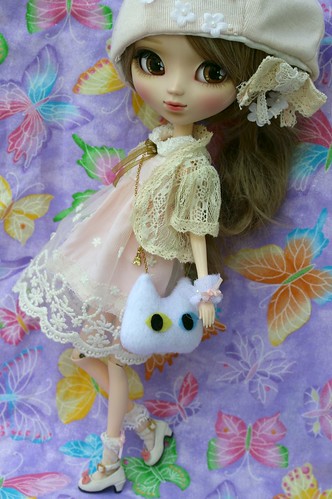 Callie is so stylish! She reminds me of an idealized version of what a little girl would dress as an adult, it’s a classic style that has been elevated to become quite chic. 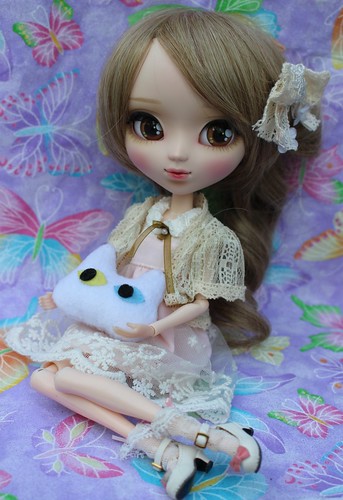 Callie’s kitty purse is a very cute and playful accessory, I love the side glancing mismatched eyes on it. 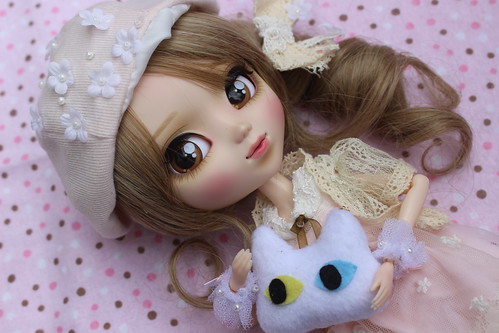 Callie’s hat is nicely details with flowers and faux pearl accents, though I’m never quite sure if I have this style of hat on correctly or not. The little wrist accessories are incredibly dainty and feminine, they are accentuated with a small pink ribbon and pearls. 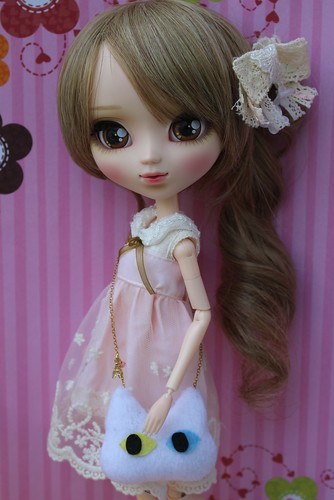 The dress hiding underneath the cardigan is actually quite cute and works really well just on it’s own. The color and the style are very youthful with a touch of elegance. The lace overskirt on the dress has lovely floral detailing. The delicate chain of the purse as well as the small Eiffel tower charm on it can be seen pretty clearly in the above picture. 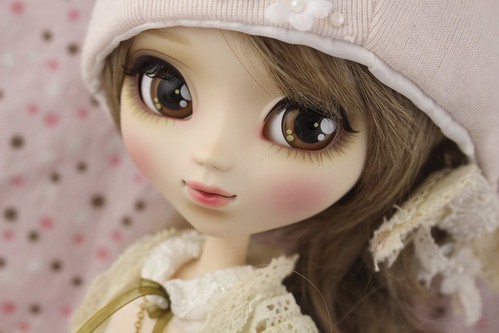 I love that the Creator’s Label line gives more people the opportunity to own unique dolls such as Callie, not everyone can afford a one of kind custom creation by some of the artists featured as a part of it but now more people have the chance to own a doll that they designed. 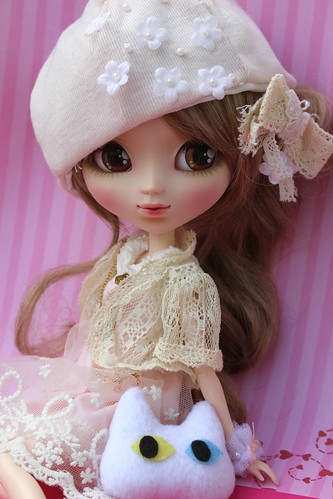 More photos of Pullip Callie can be seen on my flickr, if you haven’t already please check out Pullip Cassie’s review here. Both Pullip Cassie and Pullip Cassie are available for purchase via Pullipstyle as well as JPGroove. I’m sorry this review took so long to follow Pullip Cassie’s, I also apologize for the quality of the photos in this post most of these pictures were taken soon after my car accident and I didn’t have as much control over my lighting as I normally do with my photo tent I tried to pick out the best shots. I still plan to do a post here soon focusing on both dolls as a pair and how well they complement each other as well as how similar and different they are from each other. Au Revoir for now. 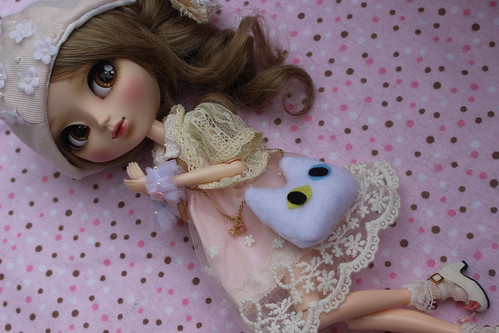