The Creator’s Label series of dolls by Groove features dolls designed as a part of collaboration with  famous doll customizers/seamstresses from around the world. I feel like the Creator’s Label line was one of their best recent ideas, the line gives more exposure to customizers and gives more people an opportunity to own something that they designed as not everyone is able to afford a one of a kind custom from some of the designers featured as a part of the line. I think the thing that I like most about the Creator’s Label line is that it has resulted in quite a bit of variety, I love seeing really aesthetically different releases and each one of the dolls seems to have a pretty strong personality that shines through Isul Hednar is no exception. 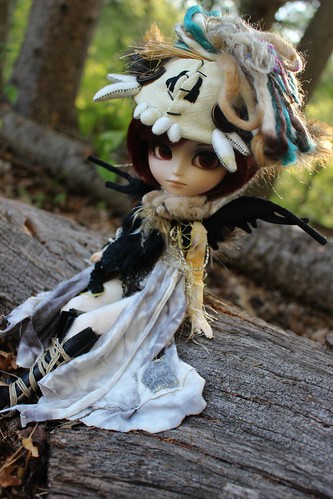 Hednar has a story associated with him it was written by his creators’ and was previously featured on Groove’s blog.

Isul Hednar is berserk (warrior). Red in the eyes and hair is the color of Hednar’s Heart. The most superior warrior with two faces, living two lives.

Rather than a human with skin of a beast, Hednar itself is like a beastlike existence. But the headgear is of a skelton. The overall color is not the color of fur coat or flesh, but like the color of a bone left to dry out for a long time.

The vivid black used in the chest armor (chest hair part) and boots is his preference. The headgear is not meant for defense but an armor to protect its own heart. In order to regain sense after a battle, he removes the headgear to return to his true self. Although the feathers are used in battle, I think he just likes to fly. 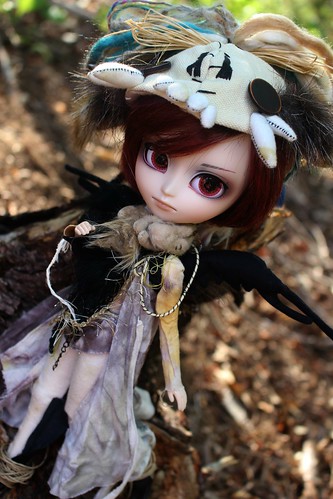 Don’t be scared…You don’t have to believe anything. This world is all like an illusion. You can see the world that you want to see… Situation Like So.. 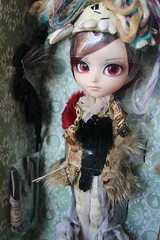 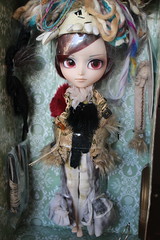 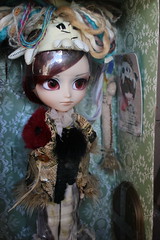 I’m kind of surprised that despite the fact that Hednar is described as a warrior, perhaps his wings are supposed to be his weapon? He does not come with a weapon I think an ax would have been a great weapon for him, heck Groove probably could have gotten away with reusing Dal Katoya’s bow for him if they didn’t want to invest in a new accessory mold. He comes with the standard card and stand which is gold colored this time.

The wig? The color is a mix of a rich wine color and black. The wine wig fiber leaves a bit to be desired and felt a little dry/crunchy which is a pity because I really enjoy the color and the style. 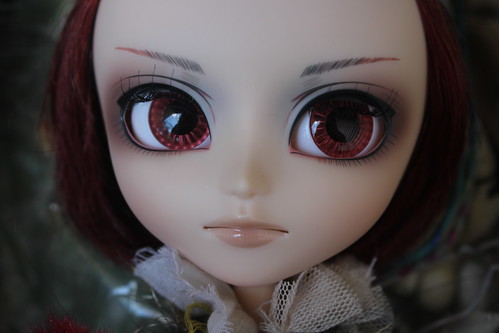 I do love boy dolls with dramatic face ups, especially Isuls so for the most part I really like his face up.  I personally do not care his eyebrows, they look to be a bit sketchy to me and I really don’t care for the way they are colored, I know the dual colored eyebrows is described as a feature by Groove but it just really doesn’t appeal to me. I do love his eye make up and the really dramatic eye shadow, the coloring of it is really fantastic with the darker red on the outside and a little bit of a smokey towards the inner eye. I really like his lips, I think the color suits him well. The eye color is a great choice, it catches and reflects the light really nicely. 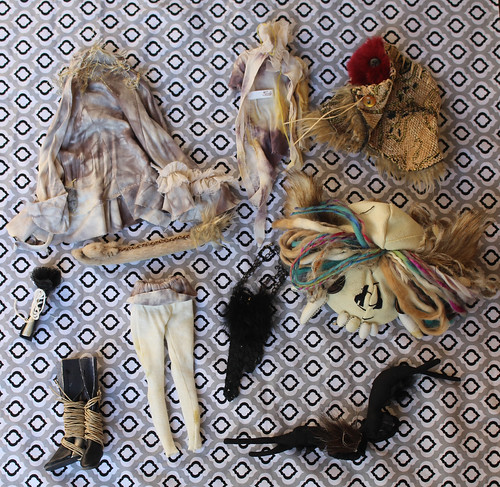 Isul Hednar’s stock consists of a skull headdress, a cloak, a de-constructed robe, a shirt, pants, a single glove, wings, boots, a chest armor piece and a scarf . It’s a definitely a lot of look! His outfit is very costumey, it is very character oriented I don’t really see the pieces of his stock as being incredibly versatile but the pieces themselves are interesting and finding this type of clothing is normally a challenge so if this is what you are looking for this is definitely it! Some of the pieces might work for a Visual Kei type outfit. The skull headdress is definitely the highlight of his stock for me it is a very interesting and well constructed piece. 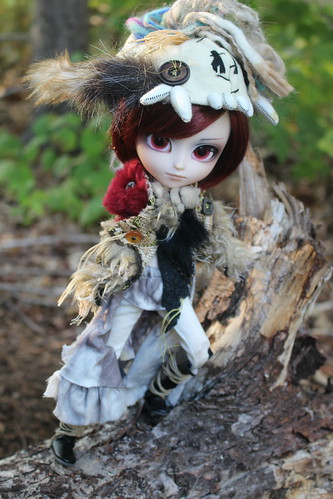 I decided early on that Hednar was a doll that I really needed to photograph outdoors, he really seemed at home in a more natural setting. There is just something really organic about him, he just seemed to belong outdoors I don’t think my normal backgrounds would have suited him nearly as well. 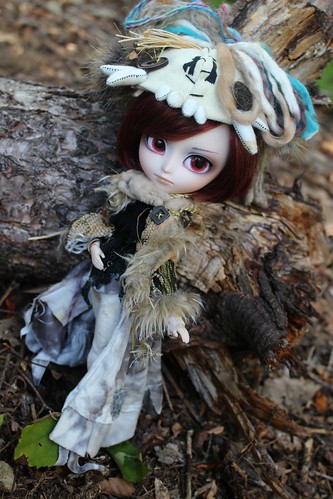 Hednar’s cloak for lack of a better term is a interesting mix of textures, faux fur with what I believe is faux snake skin it looks like he is wearing the skins of vanquished enemies in addition to his skull helmet it really adds to his fearsome appearance.  The armor piece consists of linked metal chains interweaved with faux fur. 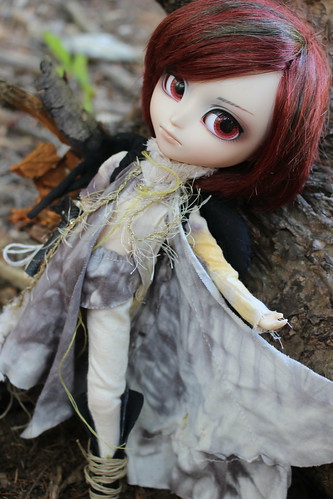 I wanted to do a close up of Hednar’s outfit without the cloak/armor obscuring the details. There is not really a closure for the shirt or the robe they are just kind of designed to be left open. The robe is a bit deconstructed. The pattern of the coloring likely varies from Hednar to Hednar the way it is colored honestly reminds me of tea staining. 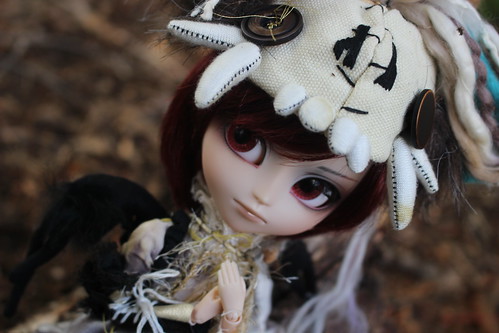 I named my Hednar Cuervo because of his black wings, cuervo is the spanish word for crow. I had thought of calling him Raven but dismissed the name as too feminine for him, I had also considered just naming him crow but somehow it just didn’t seem to suit him somehow Cuervo just seemed to suit him. 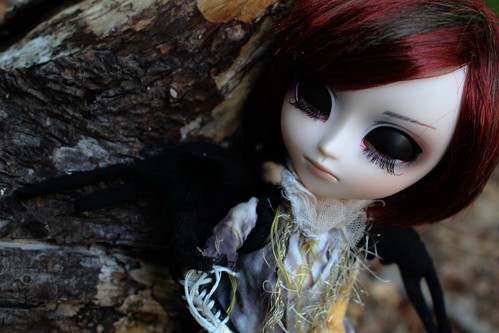 Hednar has black eyelids which adds to his somewhat sinister or malevolent appearance, I really love this wicked boy. 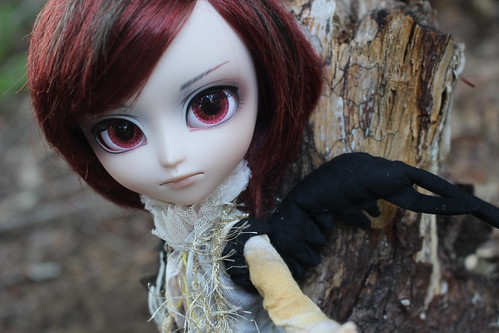 The wings are constructed kind of like a backpack , it has straps and it just straps right on to his back. I appreciate that is a separate element as it is definitely one of the more versatile pieces in his stock and something I could see a lot of other dolls wearing. 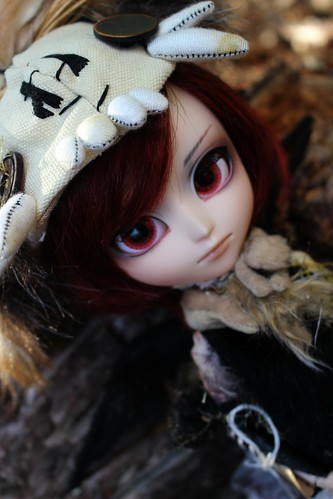 More photos of Isul Hednar can be seen on my flickr. Isul Hednar is currently available for purchase via JPGroove and Pullipstyle where he is currently on special for less than $100 as a part of their oddly named Friday sale. Fellow Creator’s Label doll Pullip Callie will be up for review here next! 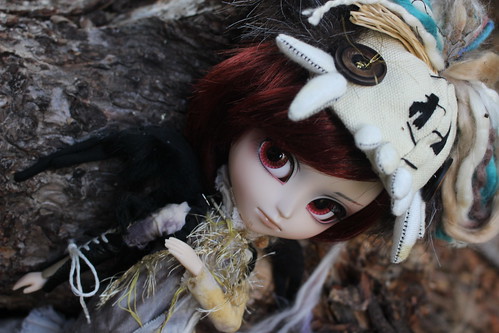