Normally I try to avoid talking about my personal life on here I prefer to be a detached narrator but when something has a direct impact here, I feel like I should share what is going on. I want to be clear that I don’t want sympathy, this is not some long segue way into a go fund me page I just want to explain what the current situation is. About two weeks ago I was in a car accident, my car was totaled. How bad was it? That’s what is left of my car. 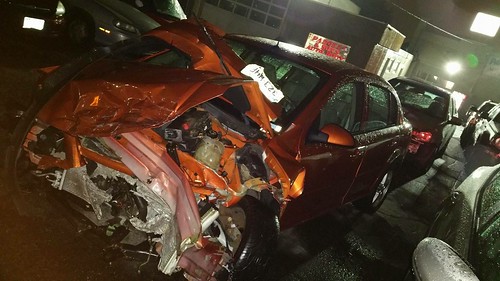 My initial impression when I was pulled out of the car by EMS was that the front of my car was completely gone. I loved my car, it was my favorite color orange so her name was pumpkin and while she had almost 150k miles on her she only had 3 miles on her when I bought her. She was still in great condition especially since she was well maintained, I literally just got her back from the mechanic the day before as the exhaust has been replaced the day before that day >_< . 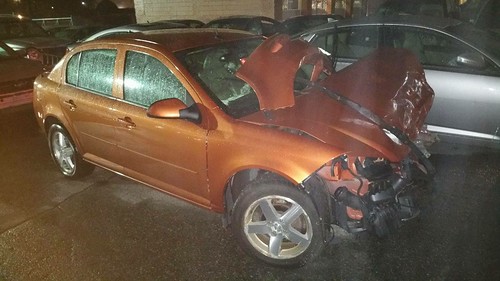 My daughter thankfully walked away uninjured and was in fact overjoyed because a friend of mine came to pick her up from the hospital where she had been checked out as a precaution she got to have a slumber party with his children that night and she was very happy about being able to see her little friends unexpectedly. I was not as lucky, my right foot is broken as well as my left leg and my entire torso is a lovely shade of purple (I highly recommend Dermacream!). Hilariously the ER originally told me my right foot and ankle were broken and the left leg was fine and that I should put weight on it when using the crutches I told them it was extremely painful and they just sent me home. I went to a different ER the next morning as I knew something wasn’t right as it was just so painful, they took x-rays and one of the bones in my left leg was in five pieces. I saw an orthopedist a few days later and they took their own x-rays, after the swelling had gone down it was confirmed that my ankle was just strained versus broken and that the left leg was broken and the right foot was broken I still can’t really weight on either leg at the moment so I am in a wheelchair until I can transition to a walker hopefully in a few weeks.

If I could use one word to describe the current situation it would be frustration. I try to keep a positive outlook on things, I try to find the humor in things because if I wasn’t laughing right now I would be crying. It does not help that like the last two years every single time it seems like things are returning to normal some life altering event happens. I keep on trying to remind myself that it could be worse; Zilla could have been injured, I could have been more seriously injured or I could still live in my apartment on the fifth floor and because it was converted historical building no elevator. I can’t really do very much by myself at the moment, I do have a wheelchair but it is ideally designed for transport so it lacks the large back wheels which I could use to push myself around with not that it would do much good as the first floor of my house is split level the living room is on one level and the dining room/kitchen/bathroom are on another and I’ve already been accidentally dumped out of the wheel chair a few times by my husband on the step down. I  really hate being reliant or dependent on other people. My bedroom is up a flight of stairs I can’t get up and though I hate to admit it the novelty of sleeping on an air mattress in a giant blanket fort in the living room is rapidly wearing off.

What impact does this have here ie. why am I telling you all this? I’m just starting to be able to use my laptop again, basically until today I had just been using my phone and iPad mini to surf the internet so responses are still somewhat slow from me.  Doll pictures, while I do have some that I have not yet uploaded to flickr on my memory card I won’t realistically be able to take any additional photos probably for a few more weeks as my doll studio is in the basement which is down a flight of stairs. Once I transition to the walker, I should be able to go out the front door of the house and circle around to the back of the house and enter through the basement. I’ve been spending a lot of time browsing various sites online which means lots of quality of time was spent on etsy/eBay etc so once I’m more mobile I have a small mountain of packages to sift through  ^^; . I’ve been uploading the few photos that I have been able to take on my instagram.

Thankfully I do have a bit of a backlog here that I have been meaning to catch up on so I’m hoping now that I’m able to use the laptop again that’ll I’ll be able to start cleaning things up a bit here and take this opportunity to get some reviews written up.

Normally I’m not a superstitious person and hadn’t realize the date of the accident at the time but I will not be driving on future Friday the 13ths or at least on that specific road especially if it’s raining. It was maybe about ten or eleven years ago but my previous car was totaled on that same road on a Friday the 13th, it was about ten miles further down the road then this accident was but it was the same road and happened on Friday the 13th. It was raining both nights, other than that the circumstances of the accidents were completely different but it’s still just like what are the odds? I didn’t even realize the connection myself until I looked up the previous claim on my insurance yikes.