I apologize as I’m falling a bit behind here again, it’s been a while since I have been able to post up a proper Pullip review here. The latest addition to my Pullip collection is Pullip Princess Serenity so she seems like as good a doll as any to restart my doll reviews here with. 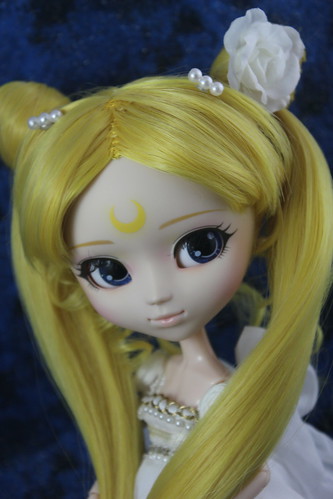 I believe it!!…. Believe in this universe that everyone is straining to protect!!…The moonshine is a message of the beloved….Feel Like So.

Unfortunately I do not have any box shots of Princess Serenity to share, she was a returned/damaged doll I found in the dent box section of Pullipstyle (which I totally recommend checking out as there are definitely some bargains to be had there). Princess Serenity had been on my want list for a while but I was trying to prioritize getting all the Sailor Scouts first before going after what is an essentially an alternate form of a doll I already have but the deal was too good to resist. 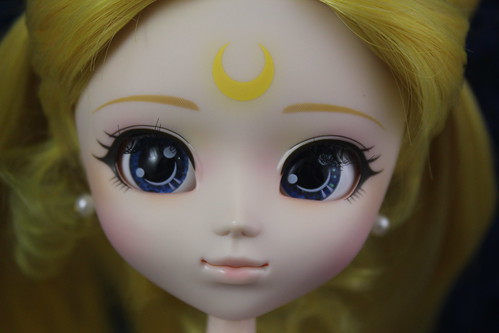 Princess Serenity has a gorgeous face up! Very nice blushing and absolutely lovely eye make up. She has really pretty sparkly blue eye chips. The crescent moon design on Princess Serenity’s forehead is a part of her face up (it’s not a sticker). Also of note she comes with pretty faux pearl earrings. 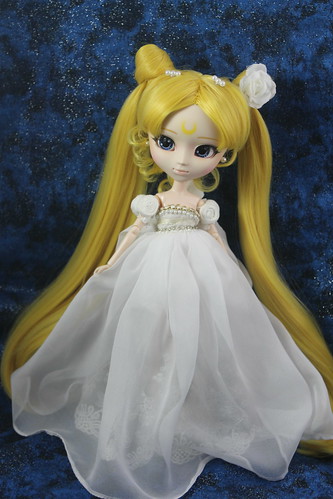 Princess Serenity has a gorgeous flowing gown. The gown has two layers, the outer layer is almost a transparent wisp that almost seems to float. The inner layer is stiffer and much more structured with lace along the hemline. One other really awesome thing about the dress is that it can completely hide her stand though I suppose it helps that it too is white. 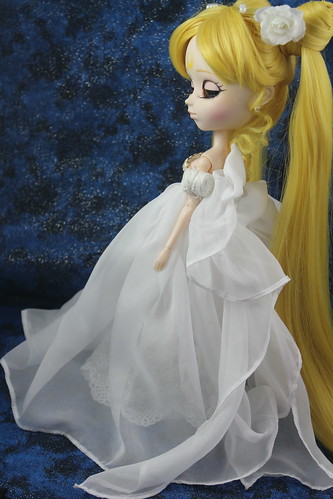 The dress is quite eloquent even from the back! I love the oversized bow on the back of the gown, somehow it almost reminds me of a butterfly. 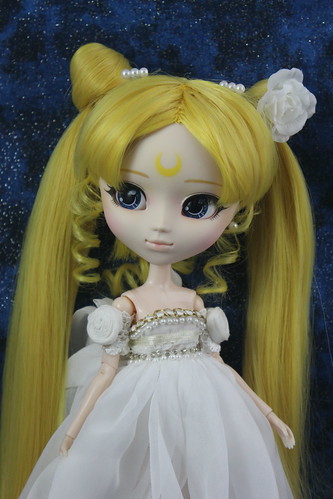 Let’s take a closer look at the top of Serenity’s gown, it has some nice faux pearl beading along the bodice. The sleeves are a detachable element from the rest of the dress, so she could be displayed with or without them. I love the swirly design of the sleeves. The dress has two clear plastic straps designed to help keep the dress up and in place. 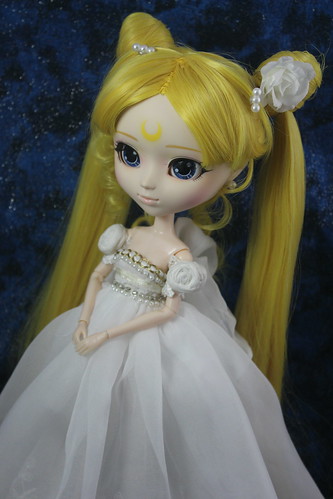 Of note is Princess Serenity’s hair color, it’s more or less the same color as Pullip Sailor Moon’s hair. In the initial promotional photos of Princess Serenity the colors were a bit off (the saturation levels seemed to be turned way down) and her hair seemed to be a lot paler. The colors in my photographs of her are very accurate. Quality of the wig? The wig is very soft. These type of wig/hair styles are kind of hard to translate into doll-form but I think Groove did a pretty good job with her wig. 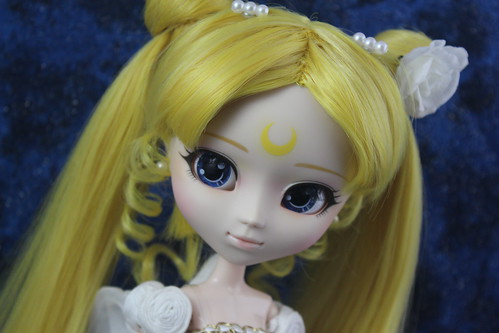 Princess Serenity comes with three hair accessories, a pair of match faux pearl barrettes as well as a single white rose. I really wish that Groove would include a little instructional sheet (preferably with an emphasis on pictures/illustrations versus text so it can be understood by people of many languages) as I never feel like I can get them placed correctly on my own ^^; . 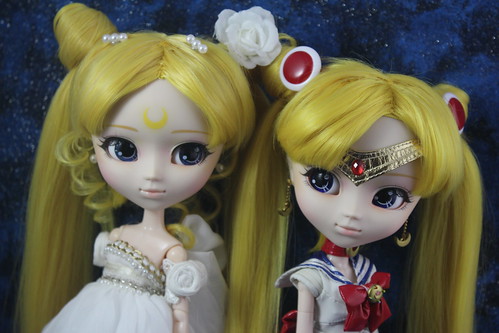 Princess Serenity looks fantastic next to Sailor Moon, they complement each other really well. I almost wonder if we will ever see a school girl Usagi released or at least a uniform set for Sailor Moon as she is the only one of the Sailor scouts that did not come with school uniform as an exclusive bonus for ordering from Bandai (she came with a plush Luna instead). 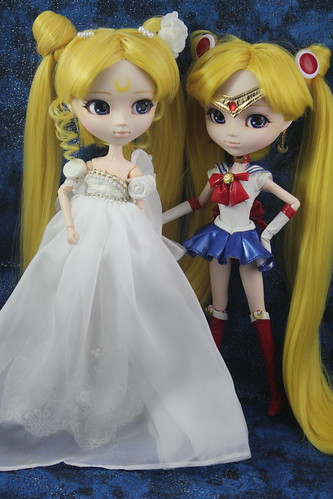 For anyone interested, I previously reviewed Pullip Sailor Moon here. 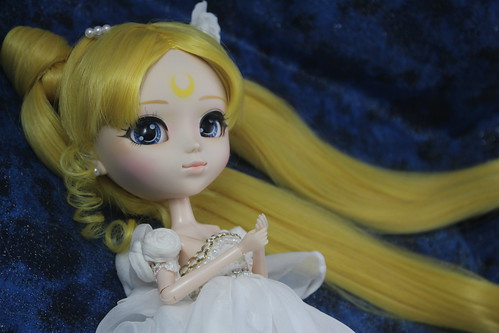 More photos of Princess Serenity are available on my flickr. For anyone looking to purchase their own Princess Serenity, she is temporarily out of stock at Pullipstyle but will be restocked soon! If you are impatient and need her right now she is available for purchase now via JPGroove. 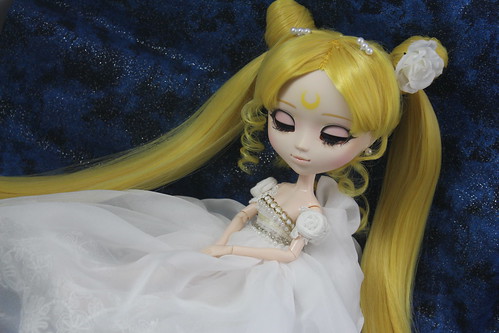 So long and goodnight!

Sailor Mars will probably be the next doll reviewed here.