Groove officially announced the upcoming releases of Pullips Souseiseki (the blue twin) & Suiseiseki (the green twin) via their blog just now. Earlier tonight I had wrote about their pending release and my thoughts on them in much more detail here, as promised I am just doing a quick update now that official information has become available. The twins have been confirmed for a March release in Japan, which means we won’t get them here in the states until April. They have a MSRP of 16000 yen each. 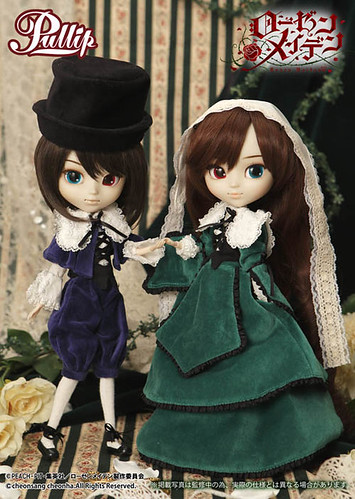 Animaru the official shop for TBS goods (ie. Rozen Maiden stuff) is one again offering a bonus item to those who preorder from them. Animaru‘s exclusive preorder bonus item for both Souseiseki and Suiseiseki is the same Jun plushie that previously came as a preorder bonus with Shinku. The Jun plushie is still adorable but not adorable enough to pay a premium to get him.