A single promotional photo of Pullip Princess Serenity has surfaced via Groove’s Blog. The doll is based on Princess Serenity which is one of Sailor Moon’s three different identities. For those of you unfamiliar with the series in a nutshell towards the end of the first season it is revealed that Sailor Moon is in fact Princess Serenity, the princess of the moon that the Sailor Senshi were looking for in addition to her also being a modern school girl.

It does seem a bit odd to me that they are releasing a second version of one of the characters before all of the inner soldier senshi are released. I know she’s essentially another doll of a character we have already seen before but what a pretty doll she is! At first glance the face ups look fairly similar but Princess Serenity seems to have much more of an air of sophistication to her and no pleather! 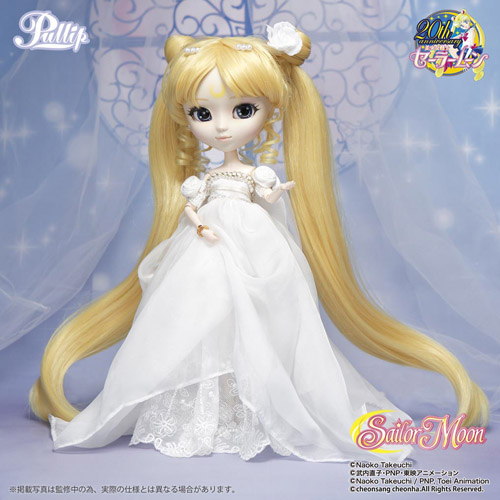 Virtually no details are known about this release at this time, as soon as details become available I’ll be sure to update but as of right now there is not any information on price/release date or if she will be a standard release (I will not be happy if she ends up a Bandai shop exclusive).

I look forward to seeing more pictures of her! I’m still holding out a vain hope that Groove will eventually make a Sailor V Pullip or at least a Sailor V costume set that can be purchased separately.