Pullip Galene was released in August of 2012, which I feel was a huge injustice to her as there was such a barrage of Pullips released between July and December of 2012 that a lot of really awesome releases got overlooked because everyone was just so overwhelmed by so many releases at once. Think I’m exaggerating? A total of 23 Pullips were released between July and December 2012 that’s more Pullips released in one six month period than in most years. There were some really interesting and unique releases released during this time that failed to get the proper amount of attention they deserved, Galene was one of those dolls.

Galene was released as a part of the third series of Creator’s Label dolls. Creator’s Label is a series of collaboration dolls where Groove partners with customizers’ from around the world to release a doll based on their customizing works, Galene is the result of a collaboration between SILVERBUTTERFLY and mistubachi@BabyBee. SILVERBUTTERFLY & mistubachi@BabyBee previously collaborated to design the very attractive Taeyang Natsume (if I were to get another Taeyang right now, he would be it!). 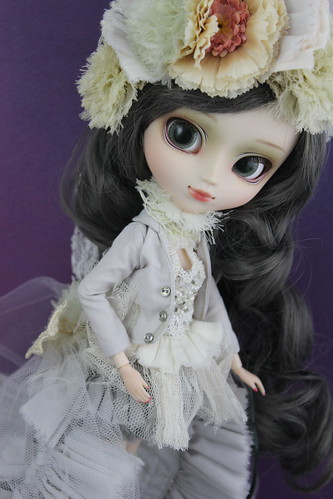 I can softly hear that tone riding the wind.For some reason I want to go find that dear sound….Feel Like So.
Pullip Galene in the box 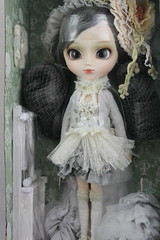 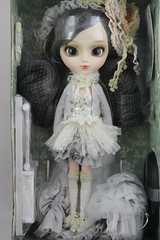 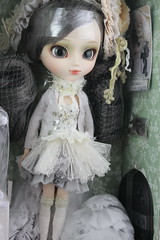 Galene comes with a slightly over the top head dress, gloves, dress with a detachable traveler skirt, jacket, shoes, socks, ribbon bracelet, collar, ankle tassels and a chair! I swear I do not remember seeing the chair in any of Galene’s promotional photos so I was very surprised to see one packaged with her. It’s the same style of chair that comes with Myra/Aira but while there are chairs are black with a red seat her’s is all white. It’s a seriously awesome accessory that took me less than a minute to assemble but is infinitely useful for use as a photo prop. She of course also comes with the standard card and stand.

Overall the quality of her stock is pretty high, it is nicely made and an interesting design. I only have two complaints with Galene’s stock, her shoes are like straight up Barbie shoes I would have expected something a bit more stylish from such a sophisticated girl and the ankle tassels. The ankle tassels looked silly to me to begin with but one fell apart almost immediately and I haven’t taken the time to repair it just yet. 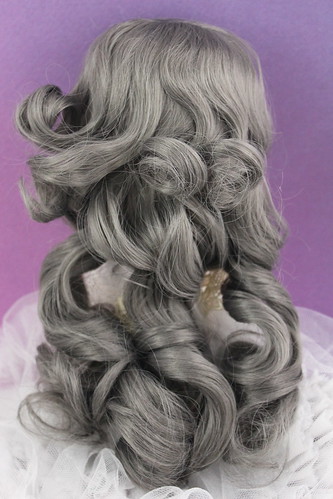 That wig! I have a fear almost bordering on pathological of curls and I’m convinced I will somehow inadvertently ruin them. Galene has lots of vertical curls there are actually two rows of curls, a shorter layer with five curls and a longer layer with three long curls. I knew she had curls but I never really stopped to think what the back view of the curls would look like, luckily someone asked me about them so I decided to take and share a picture. 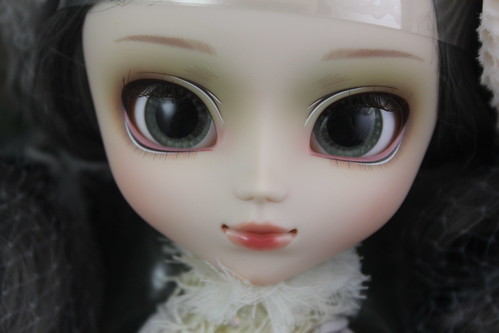 Galene has a very fresh faced face up, her make up while gorgeous is very understated so it’s pretty neutral meaning Galene would more than likely be pretty versatile and would look great in a lot of different wig/eye chip combinations. She has the lightest touch of grey-green eye shadow with a little bit of pink on her lower inner eyelid to really make her eye make up pop. Her lips are very full and are a lovely shade of pink, she has only very light blushing. I love her posh, sophisticated little eyebrows they are very lady-like. 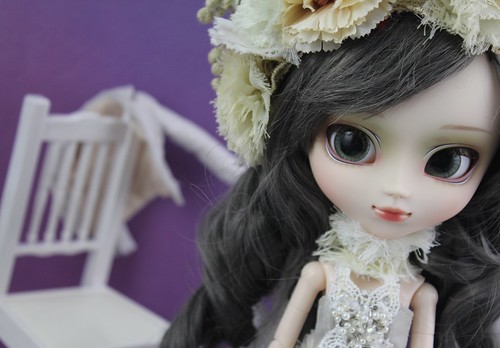 Since Galene is the perfect picture of sophisticated grace and style, I decided to not be very original when I named her and to simply call her Grace. I didn’t have a doll named Grace until now and I think the name suits her beautifully. I also liked that the name Grace tends not to be used very commonly these days but used to be a very popular name, Galene looks like she has a bit of old fashioned charm to her so it just works for her. 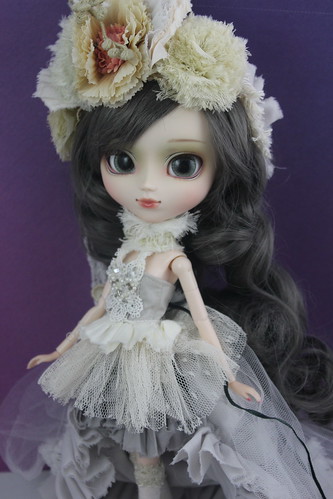 Galene’s stock outfit is very detailed and stylish, I love her all her deconstructed ruffles and lace. Her stock has a very simple color palette of gray and white with some touches of pale peach in her head piece as well as some darker gray touches here and there. 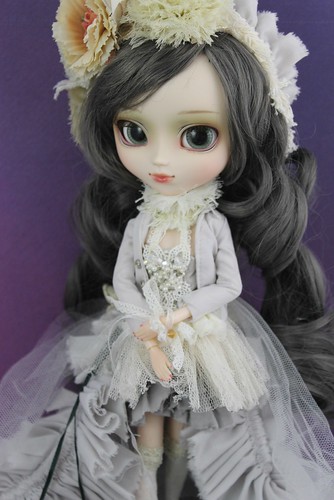 Galene is very well put together release, she is a gorgeous doll and her stock is an interesting design (and well-made) plus she even comes with an interesting accessory. You can tell a lot of thought and effort went into designing her so I feel like despite her slightly higher price tag she is worth it. I wish Groove put this much effort into all of their releases. 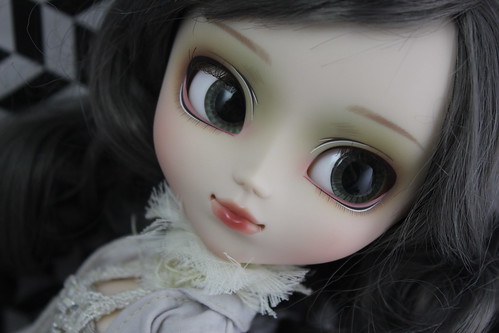 Galene sure is gorgeous, I wish more people would give her a chance! She is just such a classy and sophisticated girl, she needs more love. 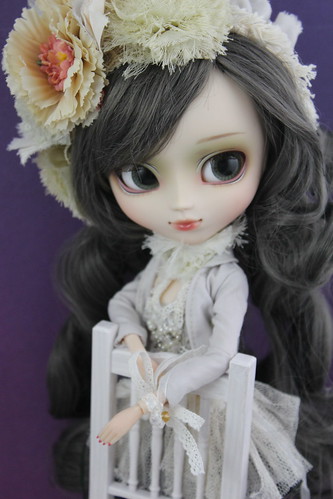 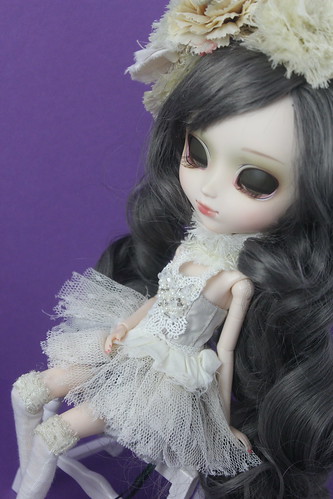 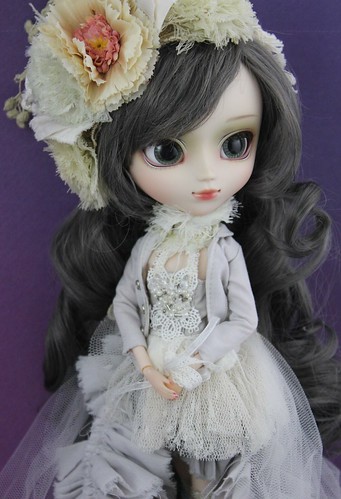 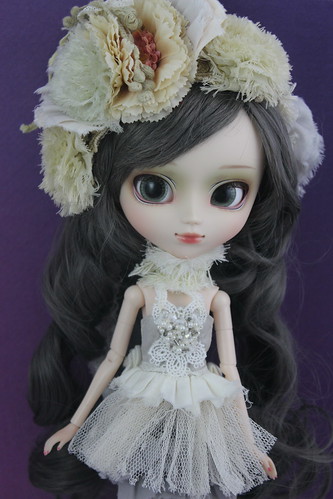 Like Loading...
This entry was posted in Doll, Pullip and tagged creator's label, galene, Pullip. Bookmark the permalink.