Back in late 2006 through 2008 Jun Planning collaborated with TBS to release a series of dolls based on characters from the Rozen Maiden anime series. Last year a new Rozen Maiden television series called Rozen Maiden Zurückspulen aired which was much more faithful to the original manga. The new tv series ushered in a new collaboration with Groove and a new series of Rozen Maiden Pullips. While the dolls are based on the same characters they look a little bit different this time around as they are much more faithful to the original manga design/design from the new tv series. 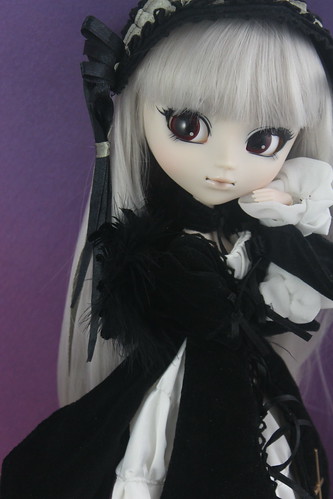 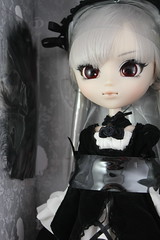 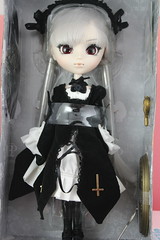 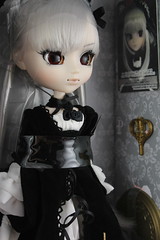 Suigintou comes with a card, a stand, a headdress, choker, wings, shirt, skirt, over-skirt, bloomers, boots and winding spring. The quality of Suigintou’s stock is pretty nice, the wings just hook on the back of her outfit and appear to be made with real feathers. The only thing I consistently don’t really care for about the new series of Rozen Maiden Pullip series is that they lack the accessories that the originals came with. The original Suigintou came with a sword, she had a MSRP of 12000 yen the new one has a MSRP of 16000 yen that’s almost a $40 increase and while the quality of the stock/wigs has generally been higher than that of the original series I am still disappointed by the lack of accessories.

Wig quality is surprisingly nice, the original Suigintou’s left a lot to be desired so my expectation was kind of low but it really was high quality, very silky and soft wig. 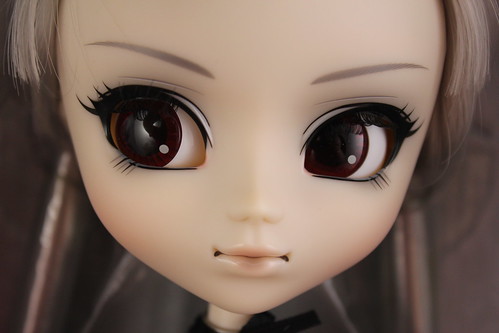 I love Suigintou’s eye make up, I just love everything about it. They are just wonderfully detailed and I love the little touches of grey. I’m not a fan of the lips, the color doesn’t really appeal to me then the downward lines in the corners of her mouth just don’t quite look right to me it’s a shame because I absolutely love the rest of her face up even her eyebrows. Her eyechips are a shade of dark red, I kind of preferred the purple eye chips from the original but I know these are more accurate to the manga series. 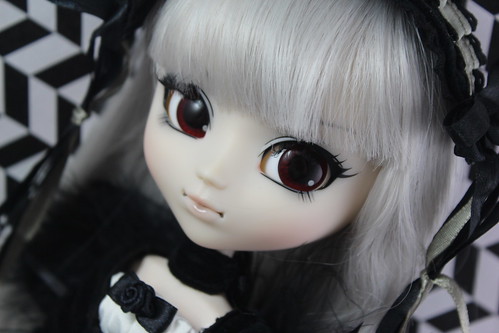 Suigintou is beautiful but she is also quite viscous and the most ambitious of all of the Rozen Maidens. 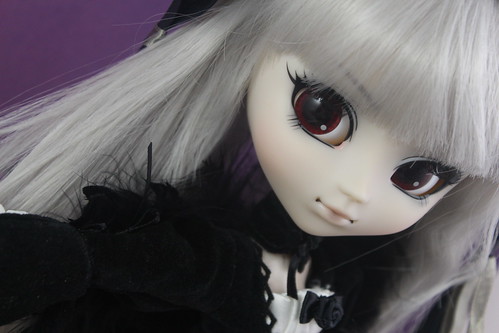 Suigintou is the only doll made by Rozen that has wings, she uses them to her benefit during the Alice game. On the Pullip Suigintou’s wings are on a bobby pin like device for lack of a better term that threads through the back of her dress, the original’s wings had snaps that it attached to the back of her dress. 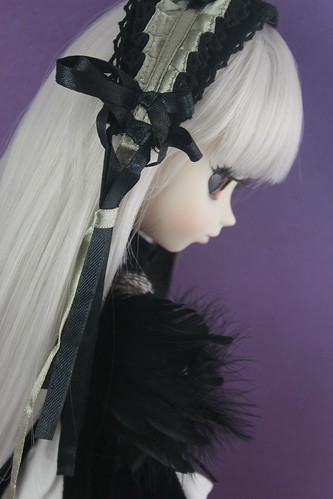 If Suigintou was preordered from TBS shop before a certain date, a black feather was included as a bonus item. 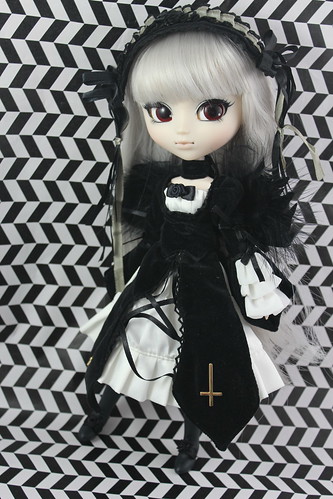 This version of Suigintou looks like all the color has been drained out of her. All the purple touches of the original Pullip’s outfit were something added from the original anime tv series. I understand it is now more technically accurate but I must admit to missing the splash of color. 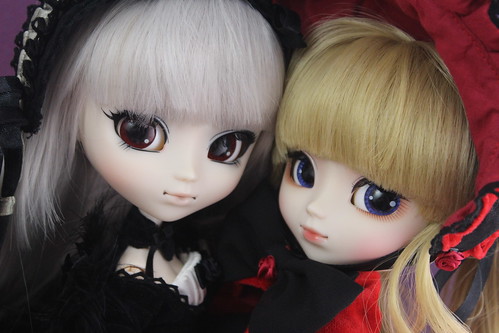 Suigintou with Shinku, Suigintou harbors a deep grudge towards Shinku so I don’t  ever see them being this friendly together again. 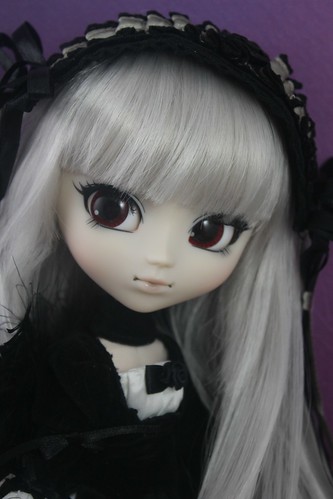 More pictures of the beautiful new Pullip Suigintou are available on my flickr. 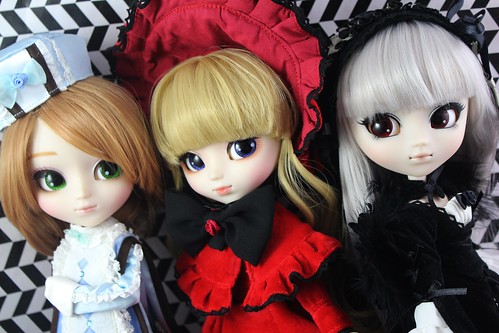 Pullip Suigintou is currently out of stock at Pullipstyle but should be restocking soon and is currently available via JPGroove. Pullips Shinku and Keikujyaku are currently available via Pullipstyle. The latest release in the new Rozen Maiden series Kirakishou is due out at the end of the month and is currently available for preorder. I had been hoping to get her preordered myself but it’s going to have to wait for right now, I’ve had a lot of expenses pop up all at once recently so it’ll be a month or so before I get any new dolls luckily I have a hell of a backlog to work through and Penny the traveling Yeolume visiting me this month to keep me busy…. maybe I’ll even ::gasp:: writing about something other than Pullips for once like the Prism Illya MDD who has been sitting here unopened for a few months ^^;