Penny is a custom Yeolume Podo by Myufish, currently she is traveling all around the US visiting various members of the Dolly Market forum. Penny and her incredible journey were masterminded by community member Pixachii, an ardent fan of Yeolume. This month is my turn with Penny! She will be here for about a month before returning to Pixachii and subsequently being raffled off to one of the participants of the traveling Yeolume project. 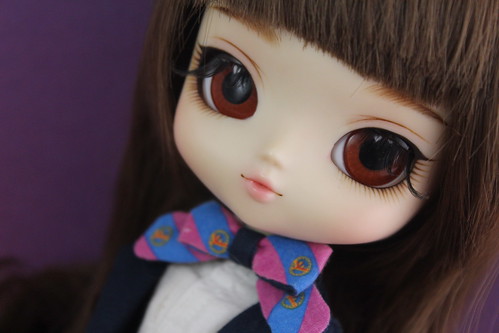 Penny arrived last night and I took her out on our first adventure together today.

We are encouraged to make Penny our own during her visit by doing small (reversible) changes such as rewigging/rechipping. I had intentions of making her go blond but somehow it just didn’t seem right for her so I ended up rewigging her in one of the MIO wigs which is pretty close to her stock color. 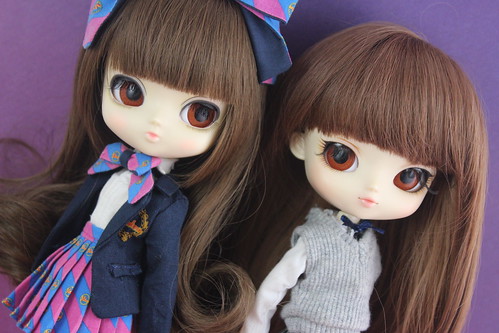 Penny started off life as a stock Podo so I wanted to take a picture of her with her stock counterpart. 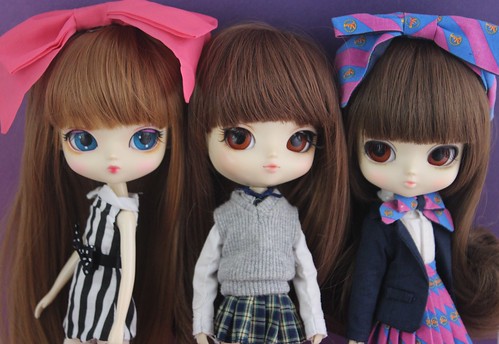 When my Yeolume Blackberry saw my Podo getting her photo taken with Penny, she decided I needed a picture of all the Yeolumes.

Ideally Penny is supposed to go out and visit local landmarks while visiting their hosts. I live in Connecticut which is renowned for the casinos? It sure seems that way sometimes as whenever I tell anyone I live in CT, I immediately get asked if I go to the casinos all the time. I don’t, I think it’s been about a year since I’ve been to either and the last time that I did go, I went only for gelato. 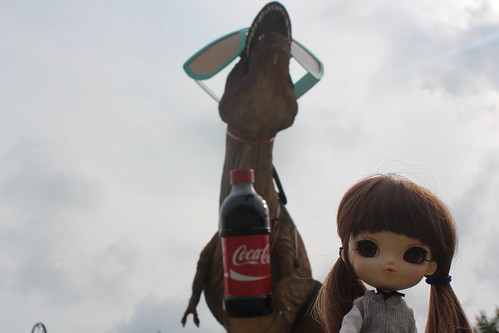 We stopped at the Dinosaur Place on the way to work to take a picture with Monty their mascot Tyrannosaurus. Monty gets dressed up seasonally, during the summer he has a giant coke bottle and sunglasses but he also has a Santa hat for Christmas and bunny ears for Easter (he makes a fairly terrifying Easter bunny as he is like 50ft tall).

Small pic-fics by the host are also encouraged while Penny is visiting. My original plan had been to take her with me to work at the New London Submarine Base. I work on the base, both Mr. Klein and my grandfather were both submariners and though he is no longer in the navy Mr. Klein still works there sometimes basically it’s an integral part of our everyday life. Turns out cameras are kind of frowned upon so photographing Penny on base was out so we went to the USS Nautilus Submarine Force Library and Museum instead. 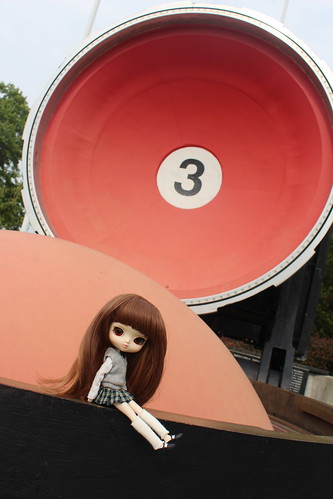 Penny: I thought I was going to work with you today?
Me: You did come with me to work silly, I just couldn’t take any pictures of you there.
Penny: So where are we now and what’s this thing?
Me: We are at the USS Nautilus Submarine Force Library and Museum as it’s off-base and a tourist friendly area. You are sitting on a missile-tube hatch, this one is from the USS Sam Rayburn
Penny: Neat! 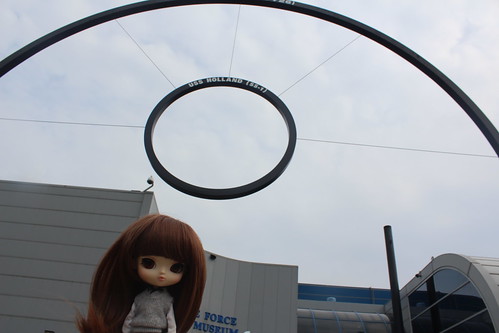 Penny:What are these giant ring things?
Me: Those are hull rings. Submarines used to be smaller, the smaller hull ring is from the USS Holland which was built way back in 1900 and is only about 10 feet in diameter. They now know how to make larger submarines, the larger ring is from the much more modern USS Ohio and is 40 feet in diameter. It’s amazing how far technology has come. 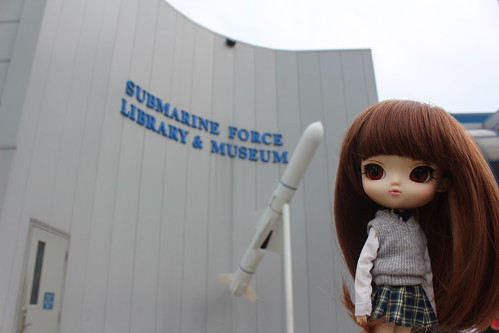 Penny: I don’t about this, all this naval history stuff seems suspiciously educational… oh hey is that a missile?
Me: Yes, if you like that one wait until you see the deck gun! This missile is called a Harpoon and it is designed to be anti-submarine.
Penny: WAIT DID YOU SAY DECK GUN???? 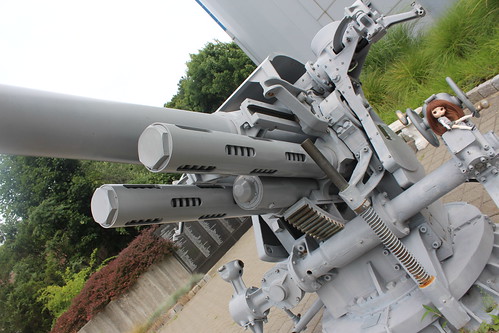 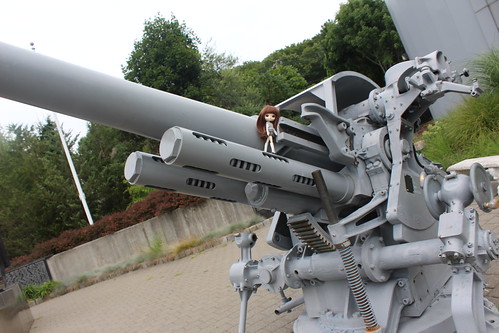 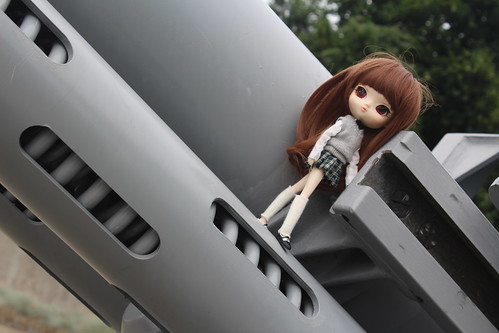 Penny: Wow this thing is so cool! I want one, do they sell these in the gift shop? I need one of these in my life!
Me: Sorry Penny, I don’t think this one is available in the gift shop. It’s from the USS Flesher, it was used circa WWII. They no longer use deck guns on submarines. Why would you want a deck gun anyway Penny?
Penny:  I don’t know but it looks really cool!
Me: I know you love the deck gun but we’ve been here for a while now can we look at some other exhibits?
Penny: FINE! 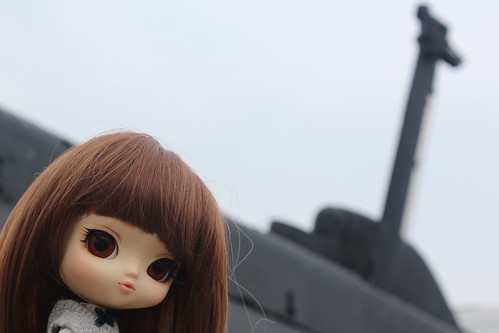 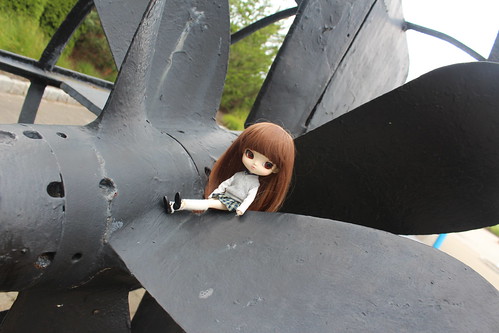 Me: This one is not actually a US ship, this is a Japanese Type One midget submarine and was used during WWII.
Penny: ::climb, climb, climb::
Me: Penny that is the propeller I’m not sure that is the best place to sit!
Penny: Hey look guards!
Me: Well that concludes today’s very educational trip to the submarine museum! I hope you enjoyed learning a little bit of history about the US Navy today! ::runs to parking lot::

Apparently we stayed a little bit too close to closing time today and they were getting ready to close up. I guess Penny should have worn a sailor suit today. I wonder what our next adventure will be and what she will look like for it! Bet you never thought you would learn a little bit about naval history on a doll blog 😛

Like Loading...
This entry was posted in Doll and tagged custom, custom yeolume, penny the traveling yeolume, yeolume. Bookmark the permalink.

4 Responses to Penny the traveling Yeolume