A new batch of MIO or Make It Own blank Pullip kits have been announced, they are ideal for collectors who like to customize to make their own unique Pullip. Three new MIO skin tones have been revealed and they will be released soon in kit form. 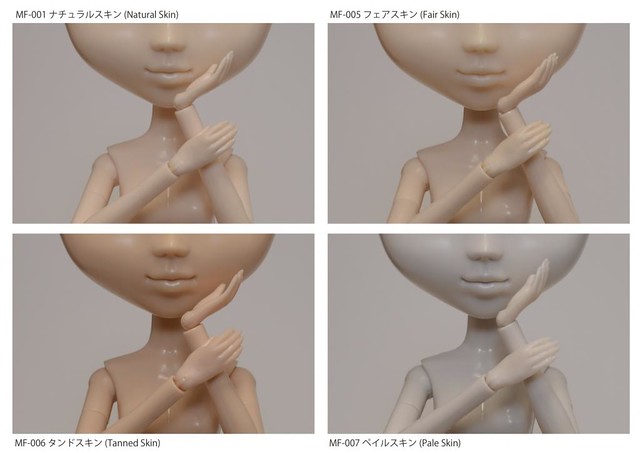 Top Row: Natural Skin was previously released in the first round of kits, Fair Skin is new but looks very similar to Natural skin except with slightly more of a yellow undertone versus the pink undertone  of the Natural.
Bottom Row: Tanned Skin is supposed to be as tan as the Cheshire Cat Byul so it’s really not that dark of a tan unfortunately. Pale Skin is ghastly pale and grey.

Thoughts:  I feel like the fair skin is like a missed opportunity to do something more interesting as it so very close to the already released natural skintone kit. The skintone on the tan doll is nice but I would have loved to have seen a darker tan MIO kit, which seems to pretty much be universal among the fanbase here in the US. I’m personally very excited about the grey MIO kit, I love horror/gore customs and I’ve already got plans for two different customs using this kit. I’d love to see more fantasy skintones if Groove continues releasing MIO kits in new skintones, I’d kill for a sky blue Pullip MIO kit.

Quick Q&A-
When are they being released? Exact date is unknown but I’ve heard that they will be released soon.
Where will they be available? Pullipstyle has confirmed they will be carrying them.
How much will they cost? I imagine about as much as the previously released kits so probably around $35 a pop.
I’m a beginner, how do I assemble and customize MIO? I’ve already done a series of posts on how to assemble MIO as well as how to customize for the not that particularly artistically inclined: Part 1 and Part 2.
Will the new doll kits match obitsu? The natural MIO kit matches obitsu white, I’d imagine since fair skin is so close in color it would be a fair match as well but it’s really unknown at this time.
Will I be reviewing the kits here? Eh, I intend to buy two of the pale skintone MIO kits for custom projects and possibly one of the tan ones as well but depending on how my results are they may or may not be photographed especially since my plans for one of the pale kits is pretty extreme so there is a pretty good chance I’ll screw it up.

It is not known how limited availability of these kits will be or if other doll kits like Isul/Taeyang/Dal kits will be released in the new skintones as well.

Like Loading...
This entry was posted in Doll, Pullip and tagged make it own, mio, Pullip. Bookmark the permalink.