I apologize for the delay on getting this posted up but wanted to confirm the details before posting. Groove recently announced the release of a new Taeyang hide~20th Memorial Version~ via their blog, the new taeyang is based on the popular Japanese musician hide and is being released to memoralize the 20th anniversary of his death.

Who is hide?  He was a Japanese musician, originally he was part of the band Saver Tiger (originally Saber Tiger) eventually he joined the band X (later renamed X Japan) and became their lead guitarist. X Japan was one of the founders of the visual kei style, where band members would dress up in outlandish ways with wild hair and make up. hide had started a solo career while being in X Japan, after the band broke up he continued to focus on hide with Spread Beaver (his touring band) as well as founding the band Zilch before his death.

In 2012, Groove released three different Taeyang dolls as well as a limited edition variant of one of the dolls based on hide’s likeness. The Taeyang dolls were all based on some of hide’s different, iconic looks from over the years:  hide Doubt version (as well as the limited version of hide Doubt version) were based on how he appeared in the music video for Doubt off of his first solo album “Hide Your Face” , hide rocket dive version is based off of hide with Spread Beaver’s 1st single ”ROCKET DIVE” and finally hide PSYENCE version based on hide’s appearance during the PSYENCE a Go Go tour. All of the hide Taeyang releases have been

Taeyang hide ~20th Memorial Version~ has a December release date and a MSRP of 22000 yen, as of this writing that works out to about $199. It is a bit apropos that Taeyang hide will be released in November just a little ahead of hide’s birthday on the 13th of December there are a lot of different events and projects lined up to celebrate what would have been his 50th birthday this year. Taeyang hide ~20th Memorial Version~ is available for preorder exclusively through Groove Rakuten and LEMONeD , additionally he can be preordered at LEMONeD’s storefront in Tokyo. Fear not international Pullip fans, Groove Rakuten does ship internationally! 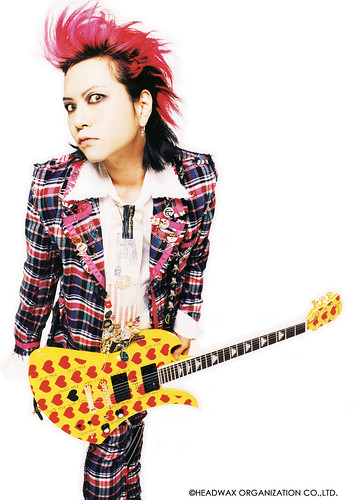 Taeyang hide ~20th Memorial Version~  was inspired by one of hide’s iconic looks a pink checkered suit, images of him wearing the suit were used to promote the Rocket Dive 2013~2014 ~20th Solo Works & 50th of Birth Anniversary special event starting in late 2012. 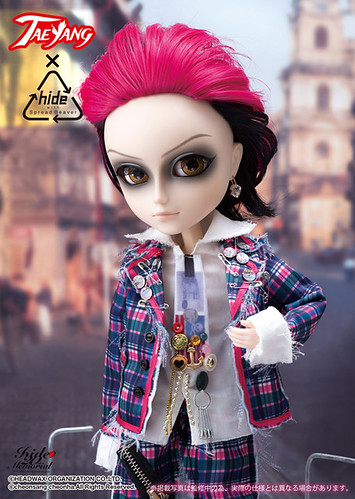 I think Groove did a really impressive job recreating hide’s pink checkered suit look, they were very attentive to the little details such as the pins so I feel like this a very faithful and loving adaption. I love that Groove even gave the Taeyang an earring just like Gackt. The only way he could have been improved for me was if he came with his guitar, I think I even would have paid extra for said guitar if it was an option.

If you are not familiar with hide, I think this is an exciting release because it’s something different with the exception of Pullip Kayano this year’s releases seem kind of devoid of color with lots of muted color palettes and this guy is spirited pop of color! Even though Taeyang hide is another collaboration series doll, I’m excited about him while there have been other hide dolls each one has been pretty distinctive from the others and based off of different looks each one has some personality.

Back view of the outfit, I love how deconstructed/distressed it looks.

hide has a really great face up, I particurly love the dark smokey eye make up. I also love that Groove managed to pretty successfully translate his hairstyle into doll form.

I am very excited for the release of hide, even if I pay extra to import him I’ll gladly do it because he is so unique and awesome! If I can only get one release the month he comes out it’ll definitely be him over Pullip Les Secrets by Ladurée as I feel as though he is a lot more worth the hefty price tag than she is plus I feel like he is a much stronger release overall.