Groove just officially announced the upcoming releases of the two newest dolls in their super popular Sailor Moon collaboration series via their blog tonight. Usagi & Mamoru are one of the most iconic anime/manga couples of all time so it’s only fitting that we get a set of doll celebrating their love in the form of Pullip Usagi Wedding Version & Taeyang Mamoru Wedding Version. Both dolls are to be released simultaneously in June which is coincidentally one of the most popular months for weddings. The standard versions of Usagi & Mamoru will have a MSRP of 23000 yen each which is about $215.40 as of this writing. 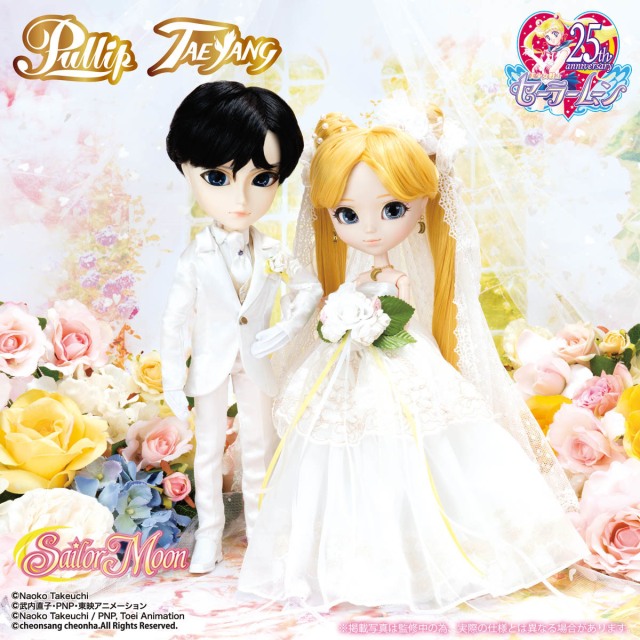 I have kind of mixed feelings about this release. I would prefer to see new, unique characters released by Groove, the series has such a diverse cast not to mention some really interesting character designs especially for the villains it gets frustrating to see the same characters over and over again. I’d much rather see Groove release a doll based on Princess Kakyuu or Queen Nehelenia than another version of Usagi or Mamoru and yet I can’t bring myself to be mad about the release of these two! I want them even though I already own all of the other versions of Sailor Moon and Tuxedo Mask, they are such an iconic almost power couple that finally seeing them getting their happy ending makes me feel sentimental and nostalgic for the manga/older anime series. 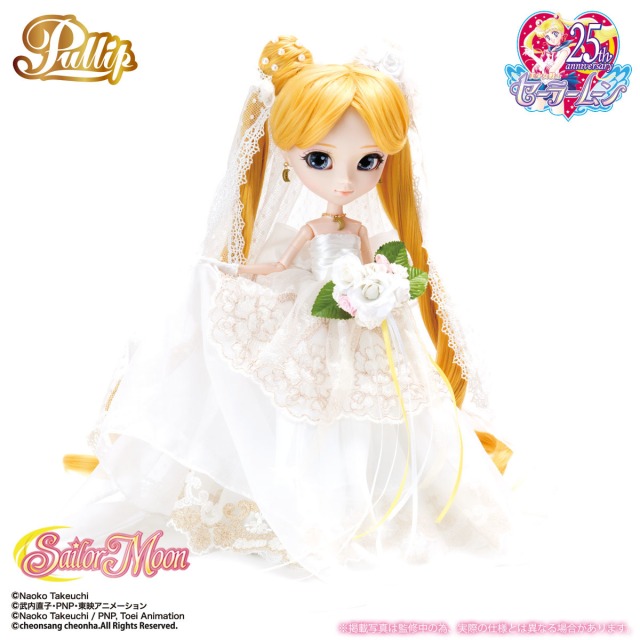 Pullip Usagi Wedding Version is a a beautiful bride in her exquisitely detailed wedding gown! The wedding dress seems to be an original design not based on any Sailor Moon artwork that I am personally familiar with, I honestly kind of appreciate that though because I feel like some of the designs I had seen over the years were overly reminiscent of her Princess Serenity gown and I like that this gown is different! I think the brocade-like aspects are particularly lovely and that the gown overall suits Usagi and her character wonderfully, though is Usagi is a bit of a clutz so naturally I am maybe a bit afraid she might somehow trip walking down the aisle!

I absolutely love the faux pearl detailing on Usagi’s odango bun and I think that it’s that much more interesting because it is only done on the one side with flowers on the other, it makes for an interesting little visual punch!

Of the different Sailor Moon releases, Usagi’s face up reminds me the most of Princess Serenity’s face up (all of their face ups can be seen here as well as a few comparisons). They are all based on different versions of the same character so I would expect for there to be some similarities. 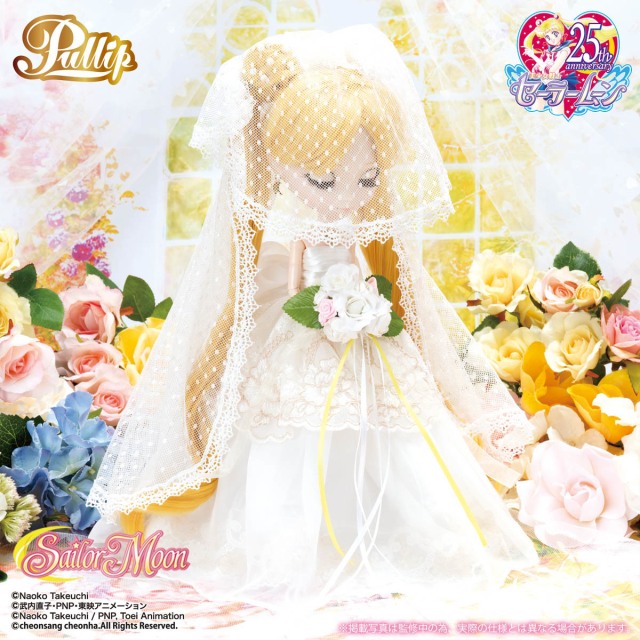 As much as I don’t really need a fifth version of Sailor Moon, I feel really drawn to this release and like that it will only be a matter of time before she joins my collection. I also feel like it’ll probably be alongside her counterpart Mamoru as it would possibly be a bit too odd for me not to have them in wedding couple form.

Mamoru’s understated look complements Usagi’s gown nicely. In most weddings, the bride is the center of attention in a stunning gown, she kind of overshadows the groom and any fashion choices he may have made. I don’t think his design is bad, like most groom wear it is maybe a bit boring but it is designed as to not pull focus from the bride.

I think if I were to get this version of Mamoru it would solely be as a companion for Usagi, even as a kid I was never Tuxedo Mask’s biggest fan, any crushes I had in the series were on the villains so perhaps that is impacting my feelings on the doll and I just have a harder time justifying getting a second version of the character.

Bandai is offering their own exclusive version of Pullip Usagi Wedding Version, she will come with a plush of Luna who is also dressed up to be a part of the wedding! A plush version of Luna also came with the original Pullip Sailor Moon release and it was honestly one of the most tempting of the Bandai exclusive for me at least. There is no cost difference between the standard and the Bandai limited version just a bunch of extra hoops to jump through to import one to the US. The exclusive version can be preordered here! 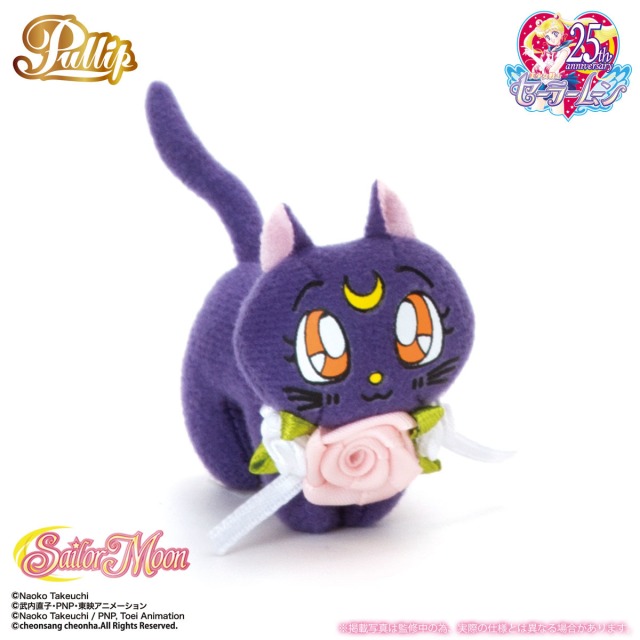 Luna looks so cute with her little collar corsage! 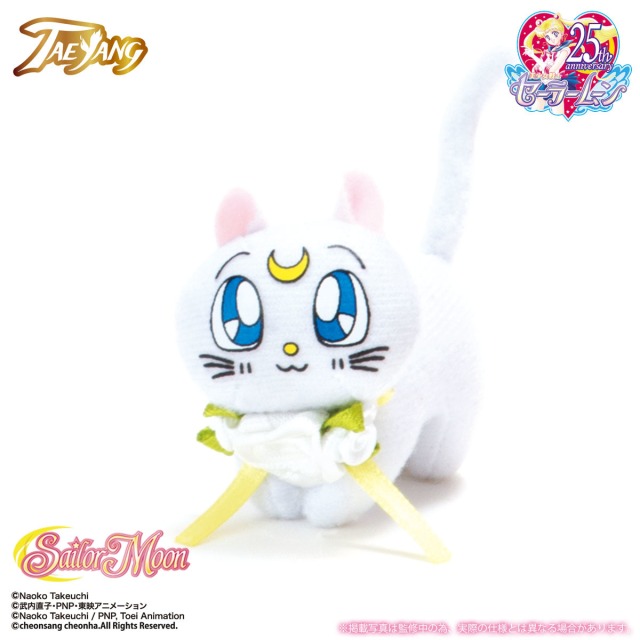 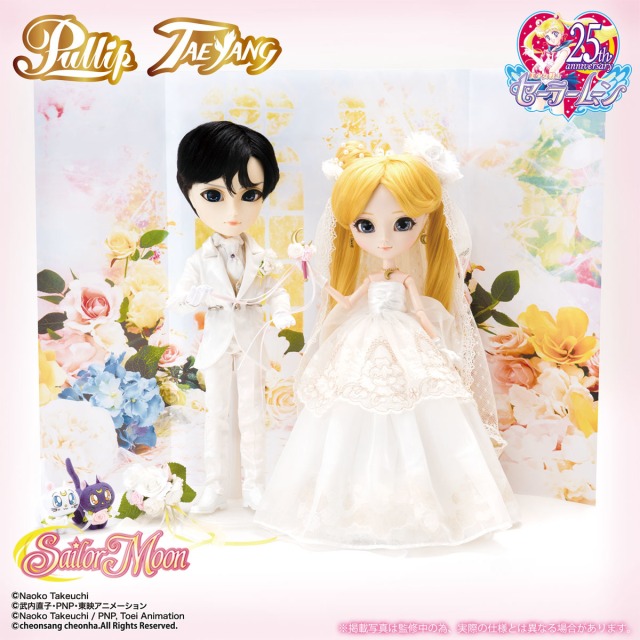 While Bandai exclusive versions of the Sailor Moon x Pullip collaboration have been a staple from the start the series, for the first time ever Sailor Moon’s official Fan Club is going to be offering their own exclusive. Available exclusively through their website and only available to members of the official Sailor Moon club is the Usagi & Mamoru Local Wedding Version (fan club limited version) and will have a MSRP of 46000 yen, that price includes both dolls it is unclear if they will come in a special box designed to hold the pair like Happy Birthday Pullip & Namu sets of old or if they will simply be sold only as a pair. In addition to coming with Luna & Artemis plush companions that come with the Bandai exclusive, the Sailor Moon fanclub version will come with a special background poster as well as a moon stick decorated to match the wedding theme. 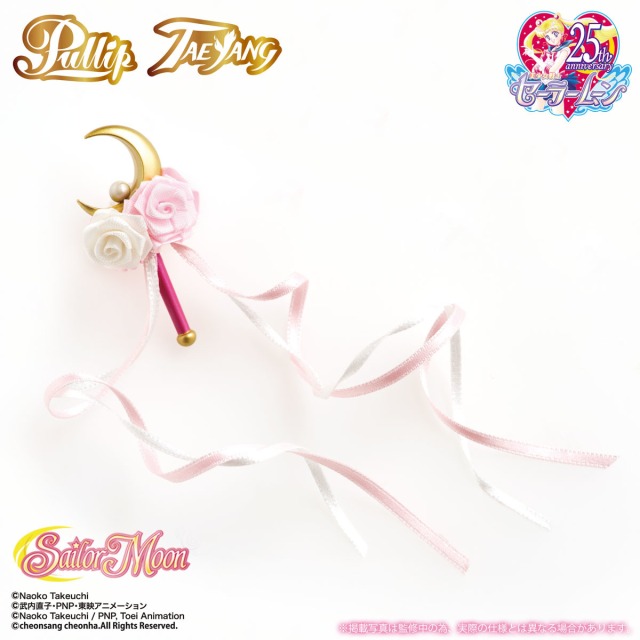 A close up of the moon stick that doubles as a wedding bouquet of sorts.