Fairytales are an almost universally shared experience that we all enjoy as children, the details and the settings of the stories may change across different cultures but nearly everyone has their own favorite fairytale from their childhood. Fairytales have served as an inspiration for many Pullip and friends dolls over the years, the latest fairytale to serve as the inspiration is Grimm’s fairytale “The Frog Prince” which inspired Isul Caros and Dal Dana. Fairy tales as they are passed on from generation to generation often change a bit over retellings most add happy endings or sometimes they just skip over some of the more violent parts. In most recent popularized versions of “The Frog Prince” the princess must kiss the frog to transform him back into a prince but in the original version of the fairytale the princess threw the frog against the wall in disgust and that made him transform back into a prince which is a bit violent. 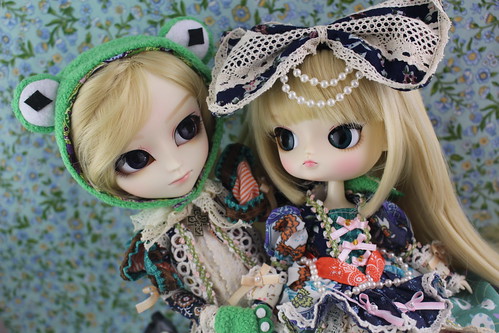 Isul Caros plays the titular Frog Prince while Dal Dana plays the princess. Dal Dana looks far too sweet and innocent to have thrown the frog into a wall so Caros’ transformation must have been inspired by a kiss!

Isul Caros and Dal Dana were released in late February of this year, they have a MSRP of 18000 yen each. Dana will be the first of the pair to receive a write up here and Isul Caros will follow soon after, I apologize in general for the delay on getting their reviews published here. 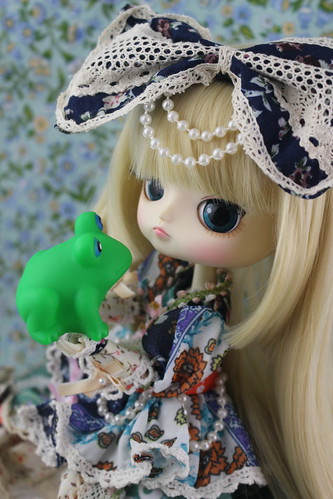 Dal Dana in the box 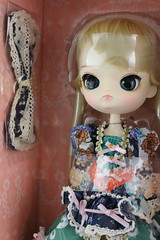 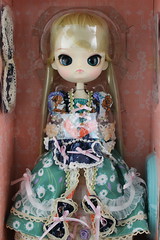 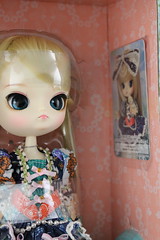 First impressions of Dal Dana in the box, wow I really love the bright unusual color scheme of Dana’s stock outfit and all of the contrasting patterns. Her dress is also a lot more detailed than I had noticed in her promotional photos.

How is the quality of her wig? Dana’s wig is soft and silky and the color is a beautiful pale blond. I feel like the “hime” or princess style bangs on Dana were a nice choice stylistically and I was kind of happy to see something that we don’t really see very often on the more recent doll releases. 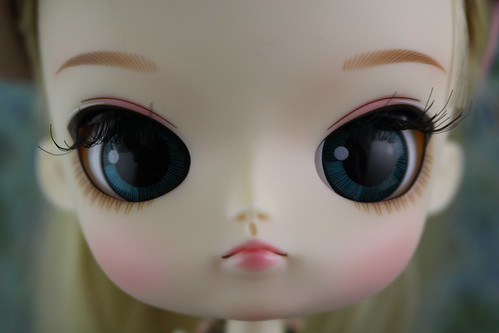 Dana has a very fresh face up, she is not overly made up. Her face up has a certain sweet and endearing quality to it. She has very feminine and delicate eyebrows that give her a bit of a shy expression. Her eye makeup is very understated with exquisite little eyelashes with just a hint of pink eye shadow. Dana has some lovely rosy blushing on her cheeks and her lips are done in a pale pink. It looks as though her lips may have been subtly reshaped a bit by the way they are painted, the lower lip looks a bit less pronounced than usual. 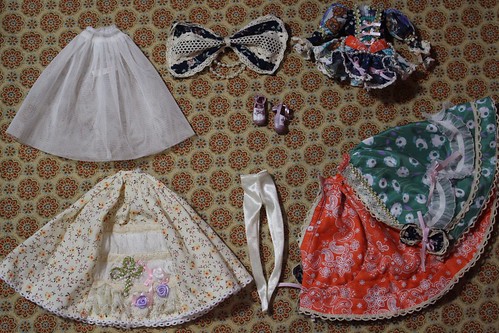 Dana’s dress is incredibly detailed with lace, bows and strings of faux pearls, she even has embroidered embellishments on her skirt. Her dress consists of many different contrasting fabrics while the different fabrics do not match they also do not clash with each other, they manage to work together in harmony. I particularly enjoy the orange parts that punctuate her dress at the belt and the lower portion of her skirt which stands out boldly against the mostly green and blue color scheme. Dana’s outer skirt can be removed to reveal a different look. Her oversized bow is a cute, whimsical touch that is attached via a barrette. 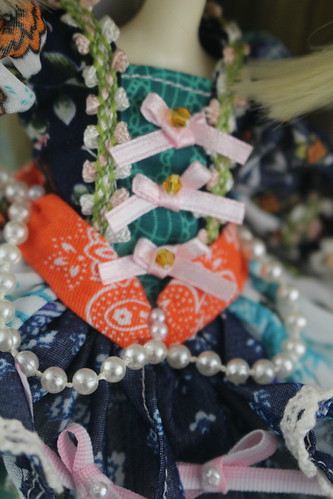 I really felt like I needed to include a few close ups of the details as I was surprised by how nice they were. I love the faux pearl beading on the bodice of the dress. 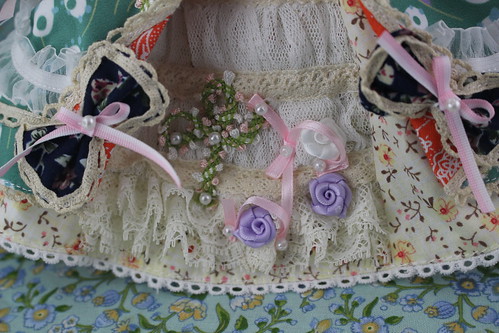 I think one of my favorite things about Dana’s stock outfit is the way that the outer skirt opens up to frame and highlight the embroidered details on the hemline of the inner skirt. I love the little floral details intermixed with the pearls. 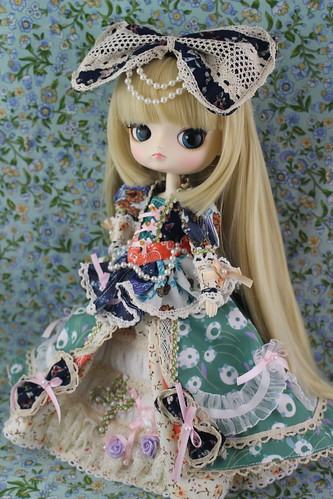 Dal Dana trying her very best to look regal like a proper princess. I think the choice to give Dana an oversized bow rather than a crown adds a bit to her childlike innocence. 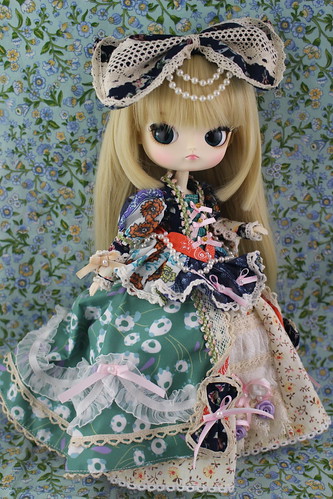 Somehow the colors and the print on the outer skirt makes me think of the 1980s, I actually really like the color scheme of muted green with the white, blue, purple, and yellow highlights though it makes me question if it is supposed to be a somewhat geometric floral print. One of my favorite aspects of the outer skirt is the scalloped lace detailing punctuated with the ribbons and pearls. 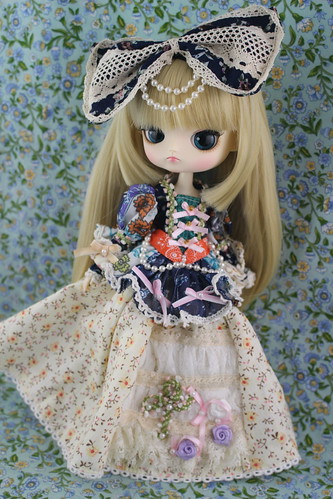 I personally prefer Dana’s stock outfit when she has the outer skirt on but I wanted to include a photo with it off as well so people had the opportunity to see both looks. I feel like without the outer shell of the skirt it throws the color balance off and the lower half of the outfit is too light/washed out. 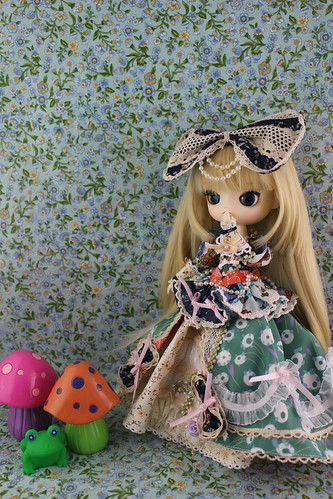 I love how much of a whimsical release Dana is, there is a certain fantastical quality about her I mean she is from a fairy tale so it does make sense. 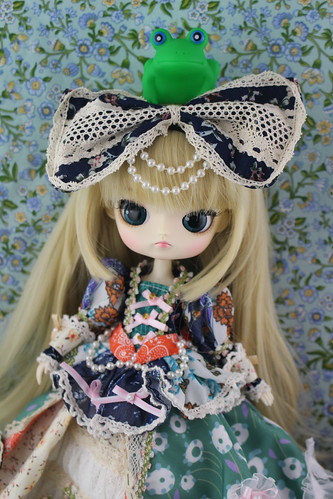 I had never realized how hard it was to find a small frog toy in stores until Dana and Caros arrived and I went on the hunt for one to use a prop, I’m not sure if they are just currently out of season or if they are always this difficult to find but I ended up going to five different stores before finding frog bath toys in the impulse section at Toys R Us. I was ultimately fairly pleased with the frog once I did find it, I feel like it worked well as a prop for both Dal Dana and Isul Caros. 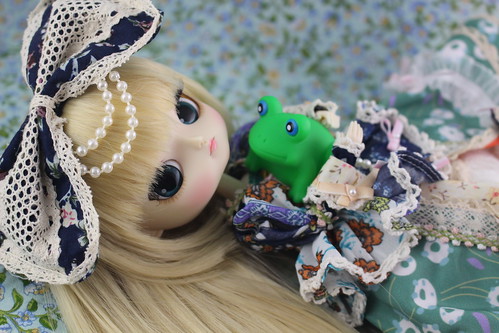 Is it time for my kiss yet? 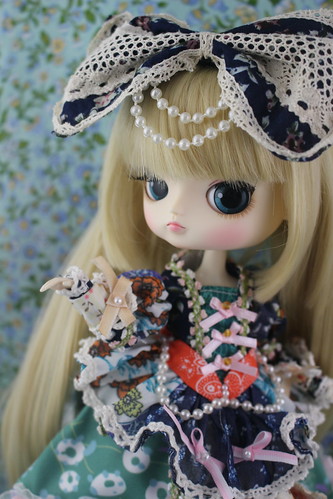 I have to say that I’m happy to see so many strong Dal releases released recently, with the possible exception of Deneb who I have not yet the opportunity to see in person so I can’t really fairly judge her. Dana, ha-ha and Quince from the Creator’s Label series were all really fantastic Dal releases, I hope that Groove continues to release such amazing Dals. 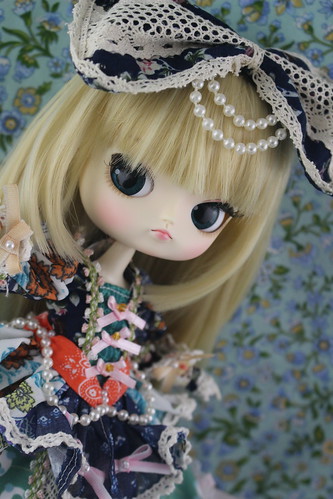 I absolutely love how detailed a release she is, the little details like the pink bows and beading really make me appreciate Dana as a release. 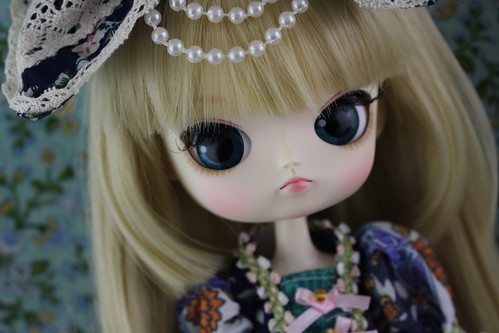 Such a sweet little princess! 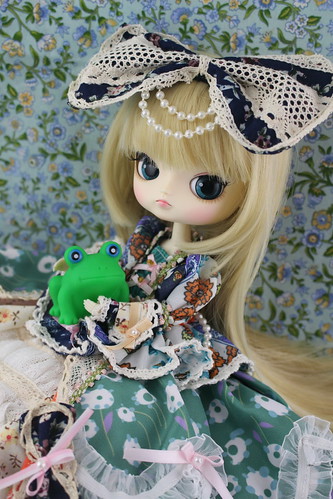 Many more photos of the darling Dal Dana can be seen on my flickr. I hope you have enjoyed this write up of Dana, please look forward to Isul Caros’ write up which will be posted in the next few days. 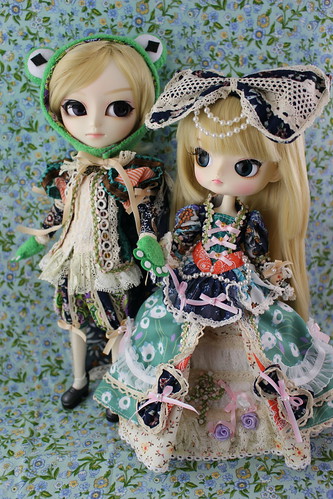