The start of a new Alice in Wonderland series of Pullip dolls was announced via Groove’s blog tonight, the series will debut with the release of Optical Alice in January (Japan release date, US release date is one month later). Optical Alice will have a MSRP of 18000 yen. The Optical series will feature a red, black and white color scheme, I love the boldness of the eye-popping colors! The contrast of the bold colors and patterns almost seems to give Optical Alice a bit of a circus flair.

Alice in Wonderland has been a popular theme for Pullip over the years, it all started innocently enough with the release of the iconic Fantastic Alice way back in 2004 but since then we have seen Alice series in the style of Another, Romantic, Classical, du Jardin, Lunatic and most recently Steampunk.  I know it may seem like Alice overload to some with all of the different Alice series released over the years but they’ve all been pretty popular so I think as long as the Alice dolls continue to sell really well we will continue to get our new Alice series every other year or so. As long as Groove continues to interpret Alice in new and different ways, I know I will continue to buy as I love Alice in Wonderland! 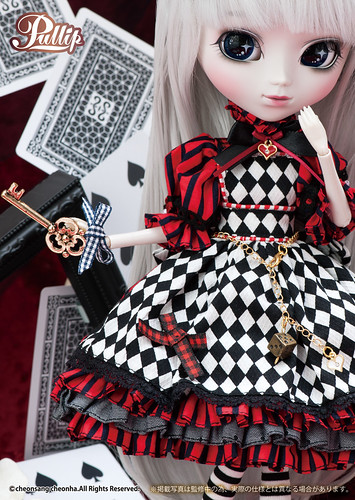 Optimal Alice is said to have a new special pale skin tone, it definitely seems to have almost a bit of a hint of grey to me but not as pronounced as Pullip Wilhelmina or the pale MIO kit which you can see
here.  I really love the new skintone and how it seems to make the colors of her stock seem to really standout that much more. 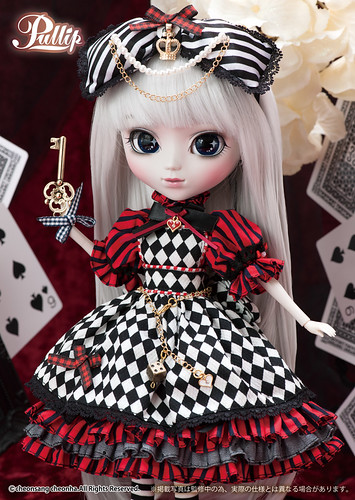 While the contrasting colors and patterns are something new, they make it easy to overlook that the actual design of the dress itself is quite similar to some of the previous versions of Alice but it is the iconic Alice look. I think the little details are what sets her apart from the other Alices, I love the little red and black bow on her apron as well as the almost candy cane piping on the apron. The heart brooch and the chain belt are a nice touch and really complement her outfit quite nicely! I adore the little dice and heart charms dangling from her belt. The key is a nice accessory.

The red, black and white color scheme is a bit reminiscent of the playing cards that were used as props for Optical Alice’s photos I’m sure that the color scheme is not a coincidence. Playing cards have long been associated with Alice in Wonderland; in the book/Disney film there were literally Playing Card soldiers with  human heads/limbs but with a card body that were loyal to the Queen of Hearts which just so happens to be another card in a deck of playing cards. Well played! 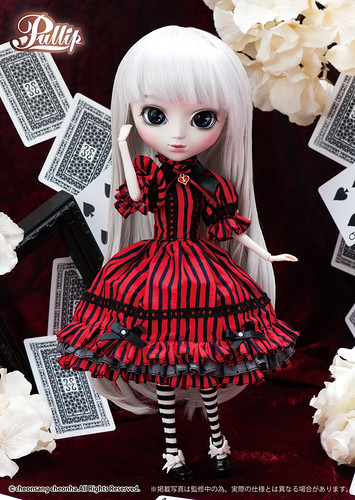 Even if you don’t particularly fancy the idea of another Alice doll, if you take away the apron the dress hiding underneath it is quite lovely. I think the dress could be quite versatile, give her a pair of fishnet tights, a different pair of heels and maybe a little hat or bonnet in matching red and black stripes and well she would not hardly be Alice anymore! 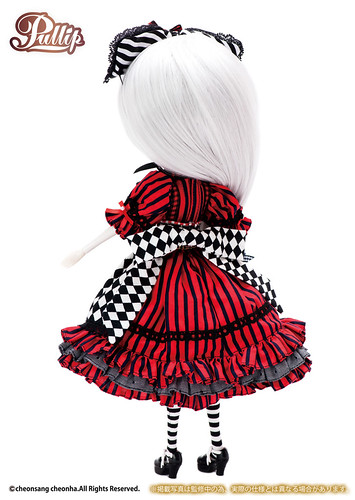 Back view of the outfit. I hope the colors of her stock as are bright and crisp as they appear in these promo photos. 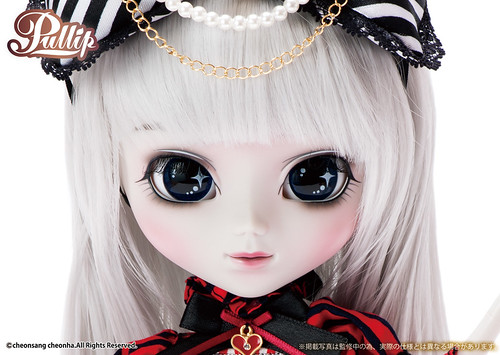 Optical Alice has a gorgeous face up! She is a very blushy girl, the blush stands out really nicely against the paleness of her skin. Her eye makeup is nice, it’s a little smoky but not overly dramatic. Her lips seem to be pale red, instead of the overpainting trend that has been popular recently the shape seems to be a bit understated this time. Her eyechips seem to have a bishoujo quality to them, I think it helps to emphasis how young and innocent of a character Alice really is.

I’m quite excited about this girl and I feel like it’s not a matter of if I am getting her but how quickly can I get her! I really look forward to seeing what other dolls get released as a part of this line. I will be sure to update when preorders open for her in the US via Pullipstyle and JPGroove.