Sometimes the popularity of Pullip releases can be hard to predict, sometimes dolls sell out quickly while other times they are available for quite some time. While Pullip Kore had been on my wishlist for a while, my priorities pushed me in other directions and I decided to wait to pursue Pullip Kore. I wrongly assumed that purchasing her could wait a bit and surely she wasn’t in danger of selling out…. I was wrong. I made obtaining Pullip Kore my number one priority after noticing that she had been moved into the Archive section of Pullipstyle, I managed to find her on eBay for a decent price via a random seller.

Pullip Kore was released in April of 2014 which was seemingly perfect timing for her release due to her spring theme. Her MSRP was 15000 yen. Pullip Kore’s inspiration seems to be that of a Spring Goddess, she also seems to have drawn inspiration by the art work of Alphonse Mucha’s Art Nouveau movement. She bears a striking resemblance to the girl in the F. Champenois Imprimeur-Éditeur lithograph in particular which kind of makes her an unofficial addition to Groove’s fine art series of dolls alongside Pullip Girl with a Pearl Earring. 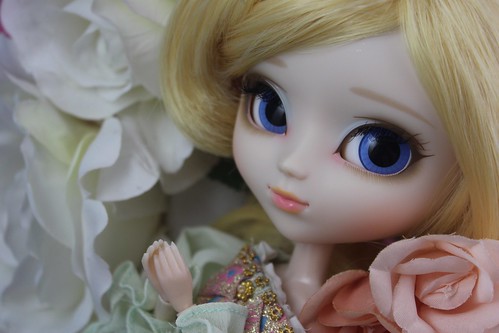 Drawn by a gentle breeze… The sleeping time starts to move… My smile calls for spring.. The flowers dance the waltz… feel like so.

Pullip Kore in the box 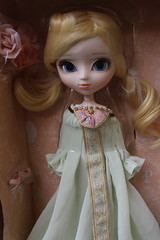 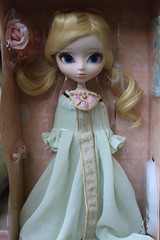 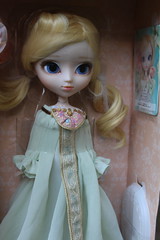 Pullip Kore comes with a long flowing sea foam green gown in addition to a rather unspectacular inner dress that was included because the outer dress is almost sheer, it’s seriously a long white unembellished sheath and nothing more. She also comes with shoes and two floral hair accessories, one large and one small. She comes with the standard card and stand (white). The quality of the dress is really nice, I know the style is meant to be loose but I can’t help but wish it was a bit more fitted as it times when I was photographing her it got a bit frustrating.

The wig was one of the initial things that gave me pause about Pullip Kore, the style is just so specific and it’s sewn into the style. If something gets messed up with the wig it’s nearly impossible to get it back into the style so I advise not playing with the wig too much although you are pretty much required to if you want to put the included floral barrettes in and those barrettes are not always cooperative. The color is really nice and the wig itself is very soft. 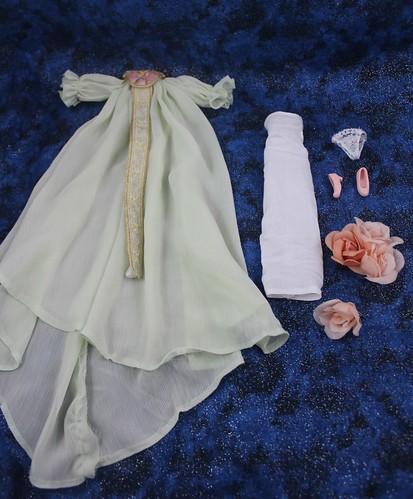 I was not kidding about the dress being very long! The white underdress is very fitted, I ended up slitting mine up the back to make posing Kore a bit easier.  The sash for lack of a better term is beaded and embroidered. 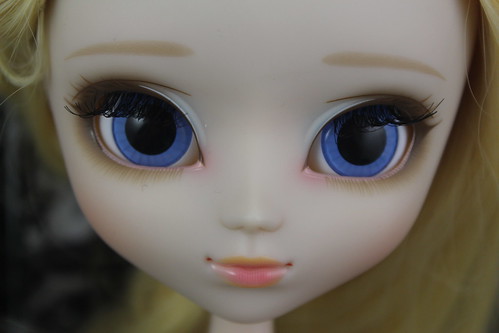 The other thing that had admittedly initially gave me pause about Kore was her lips, they are not the same color the top lip is more of an orange-y shade while the bottom is pink while I was initially unsure of it I actually really like it in person. Kore has a very fresh face up, lots of brown and orange tones. I love the shape of her eyebrows, they almost seem to give her an innocent expression. She has stunning blue eyes they really pop compared to the more subdued colors of her face up, I love the contrast. 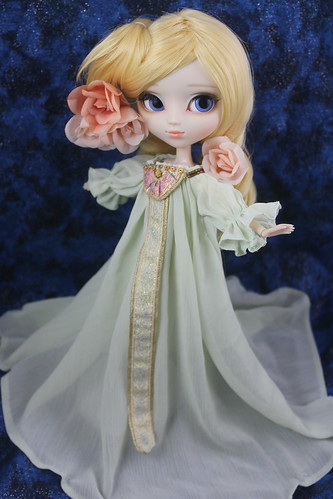 Kore’s gown has an almost ethereal quality to it, she almost looks like she is floating in it. I love that the gown isn’t white, the pale green is an unusual choice that we don’t see used very often. I think the color works well with her spring theme and it provides a great contrast with the pale pink hair accessories. 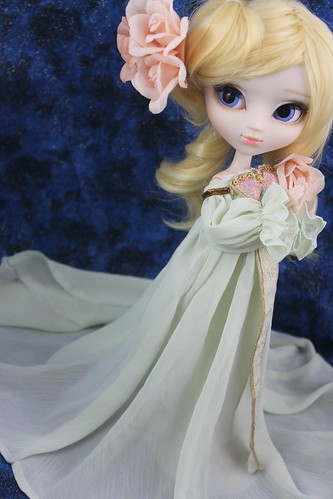 Kore is a subtle beauty, I wasn’t quite enchanted by the promo photos but owner photos of her really swayed me when I found out that she was starting to become harder to find I knew I could not miss the chance to add this beauty to my collection. 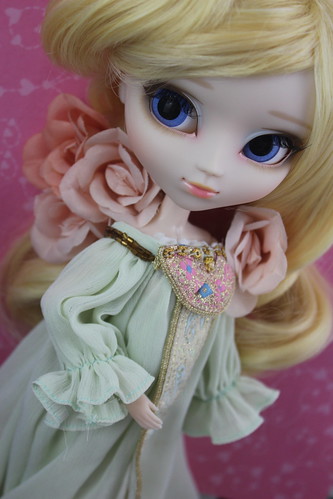 The hair clips are designed to be versatile and arranged a number of different ways, Kore’s wig made me a bit nervous as if I messed it up there was no way I could get it back in that style so I didn’t play with the positioning of them that much. 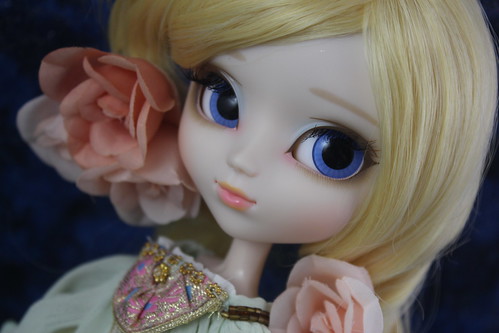 Many years ago, back in 2007 Jun Planning released Pullip Blanche who had somewhat of a similar theme. I had named Blanche Persephone after the Greek goddess of spring, Blanche had always seemed to have a bit of a melancholic feel to me which seemed to fit Persephone from Greek mythology as well I would be a bit sad too if I had to spend three months in hell every years because I ate some pomegranate seeds. Since the name Persephone was already taken, Kore got named after a different goddess of spring Chloris. 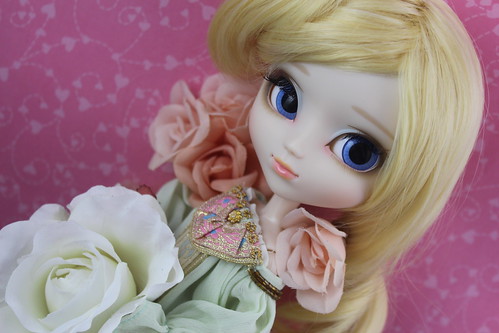 Kore is a true natural beauty, I look forward to taking her outside next spring for some some proper photos among flowers as everything is currently dead or dying here during fall. 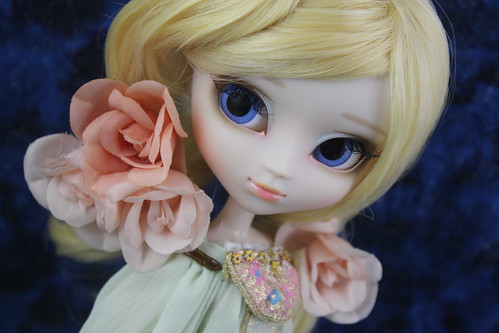 More photos of Pullip Kore on my flickr, unfortunately Pullip Kore is currently not available via Pullipstyle or JPGroove. I was kind of torn as to whether or not I should post this because she is becoming a bit harder to find now but I decided that if I was curious about a doll, I’d appreciate being able to look at photos/information about it to make an informed decision about whether or not I should try to hunt her down.