Sometimes I feel like I am one of the few people who genuinely love Byul, she definitely isn’t the most popular member of the Pullip family of dolls BUT her designs are consistently some of the most interesting in the Pullip family especially when she is released as a part of a set. There have only been four Byul releases over the past two years and it’s been over a year since latest release Byul Fata came out.

Clorinda is a part of the Starry Night Cinderella series, Byul was aptly cast as one of Cinderella’s evil step-sisters (sadly her Dal counterpart was never released). She was released in July of 2013 alongside her fellow Cinderella alum Pullip Dahlia Cinderella (pre-transformation Cinderella) and Isul Fairy Lumiere (Cinderella’s fairy godmother). Clorinda’s original MSRP is 14000 yen.

Pullipstyle recently placed Byul Clorinda in their perplexingly named Friday Sale section, slashing her price down to a mere $70. I had been admiring and wanting her for quite some time  but not quite enough to pay the $110 she had been priced at, as soon as I saw that she had been placed on special I ordered her! 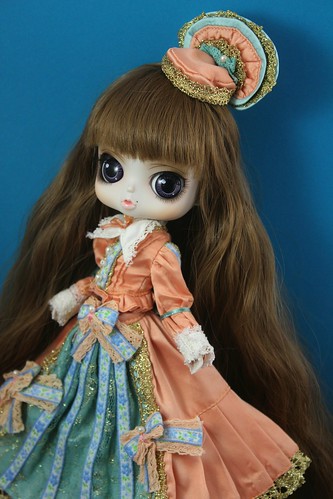 Mom! Mom! I tried on a new outfit. What do you think? Am I much prettier than that dirty girl?

Byul Clorinda in the box 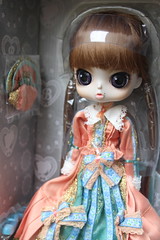 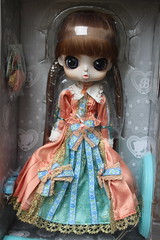 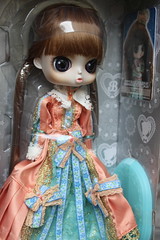 Byul Clorinda’s stock is a mix of peachy orange and a really lovely share of pastel blue with gold and white accents. I was not initially too sure about the color combination of her stock especially since there were precious few owners photos but I must say that it is really lovely in person. She doesn’t come with much in the way of accessories but she does come with a very cute hat. She also comes with a card as well as a pastel blue stand to match her shoes/outfit. Her wig is decent quality, I love the soft wave as well as the color. 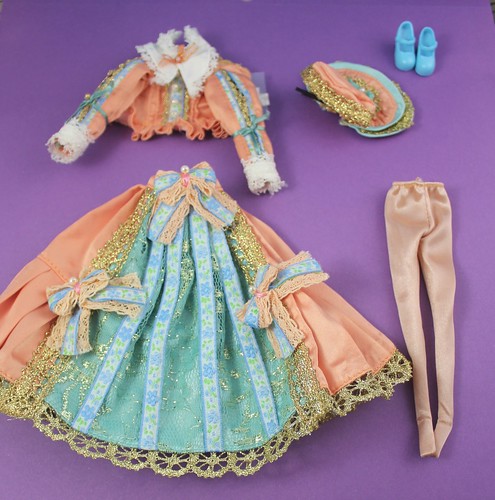 Let’s take a closer look at her stock outfit! Up until I deboxed Clorinda I had kind of assumed that her dress was one piece but it is actually a skirt and blouse. Her little pillbox style hat has a bobby pin to help keep it in place. She also comes with cute blue shoes and a pair of tights. Overall, I was very impressed with the quality of her stock outfit my only complaint is I feel like her skirt should have had a bit more poof to it, it would have been nice if a petticoat or crinoline had been included. 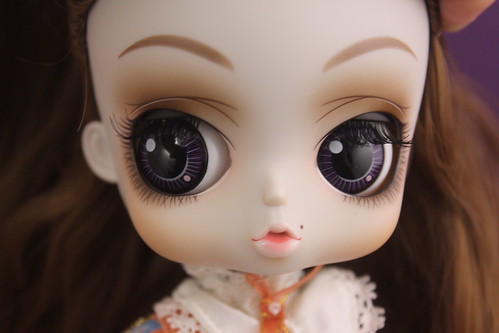 Let’s take a closer look at Byul’s Clorinda’s face up, she definitely has one of the most dramatic Byul face ups that we have seen so far on Byul (check out the Byul face up index to compare her face up to some of the other Byul’s released over the years). She has a really great face up, done up in orange and brown tones. I especially love her eye make up as well as her lips, I find the style of lip paint can really make or break a Byul and I think that her lip make up really flatters her lip shape. She has pretty dark purple eyes. She has a beauty mark which is very rare with Pullip and friends dolls, I believe the only other dolls with beauty marks are both of the Risa Dals and Pullip Vivien. 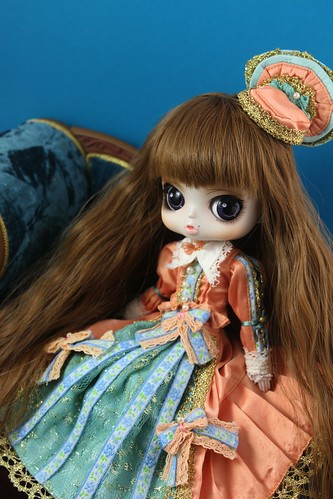 Clorinda is very a glamorous and regal girl. 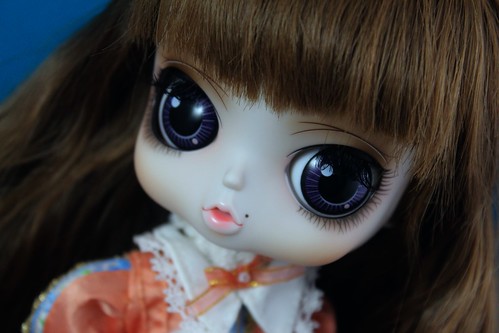 I can’t get over how beautiful she is! 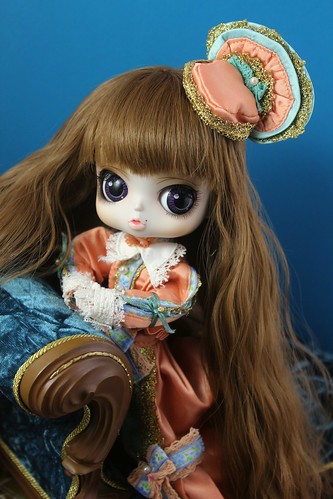 Clorinda would not only be a great addition to anyone’s collection of Cinderella dolls but I think she would also look fabulous alongside historical themed dolls like Pullip Marianne or Dal Charlotte. Clorinda also looks fantastic with the Jun Planning petit luxury furniture. I’m very happy that I was able to add her to my collection and would definitely recommend her to other Byul lovers! 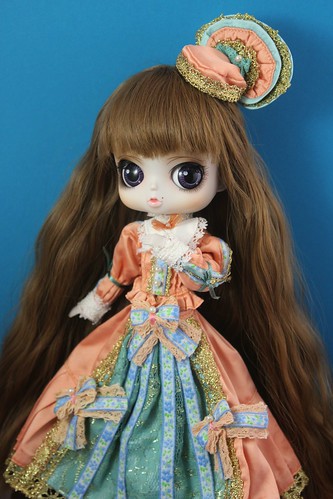 Byul Clorinda is available for purchase via Pullipstyle.

Like Loading...
This entry was posted in byul, Pullip and tagged byul, cinderella starry night, clorinda. Bookmark the permalink.