A little bit over a month ago, I went to New York to attend the final day of the Miku Expo. I had meant to write about it sooner but shortly afterward my world kind of turned upside down. Why did I decide to write about it now? You’ll see, I promise. 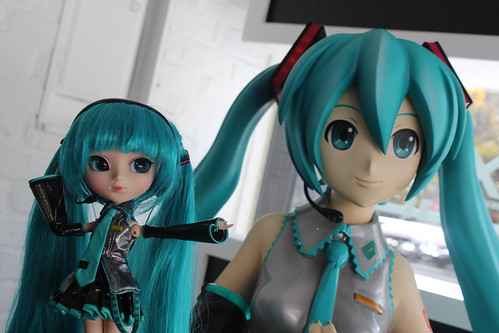 Despite my close proximity to New York, I don’t really go very often so the Miku Expo seemed like as good an excuse as any to make the journey especially since I love Miku so much . My ideal had been to attend the concert unfortunately my friends took one look at Miku’s appearance on David Letterman and decided that the concept was just too strange for them and that they were all incredibly busy that weekend. I had better luck with convincing someone to go the Expo itself at Wallspace. I decided to take my Miku Pullip well as my Miku Funko Pop with me for any photo opportunities that might come my way during my trip to New York and I’m glad I did because I definitely had fun taking photos. 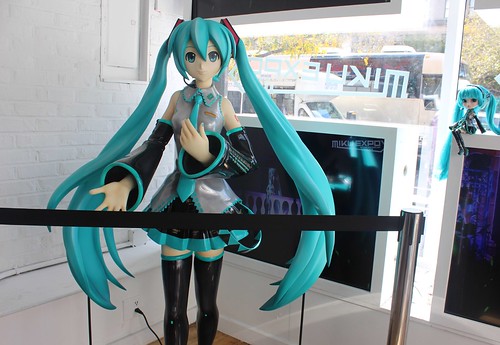 The first thing we saw when we walked in the door at Wallspace was a wall of monitors with footage from one of the previous Miku concerts as well as a 1/1 scale statue of Miku. I could not get over how huge she was or the fact that she would have looked amazing just chilling in my doll studio. I managed to sneak Pullip Miku into the background of this shot. 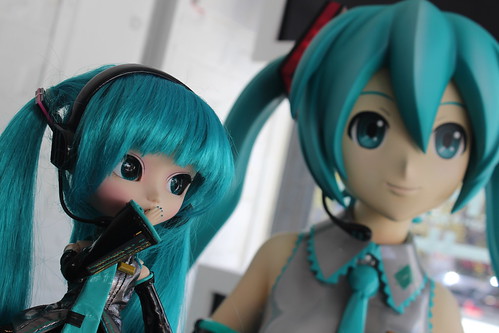 It seems Pullip Miku couldn’t get over the size difference either. 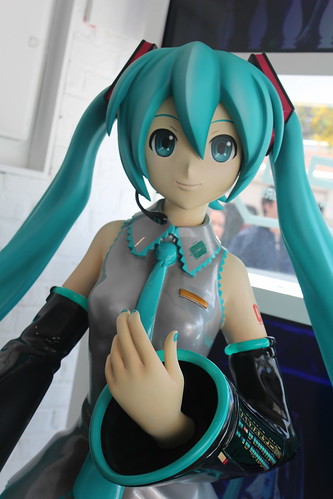 I was really impressed with all the details on the gigantic Miku statue. 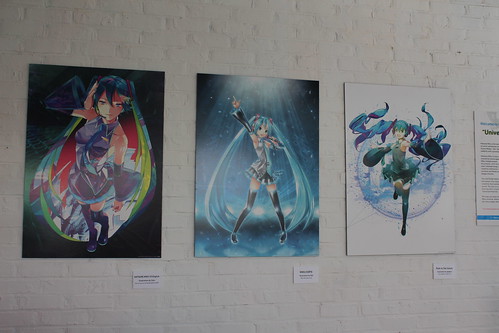 Some of the prints on display, I particularly like the one in the middle. 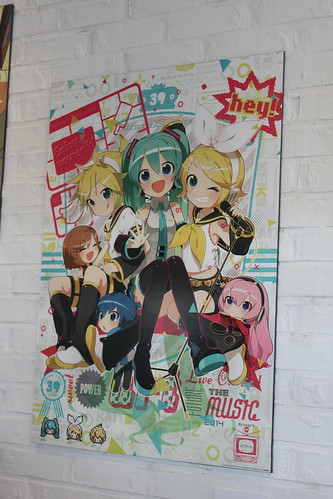 Another really cute illustration of Miku and some of the other Vocaloid characters, I especially love Meiko’s joyful expression. 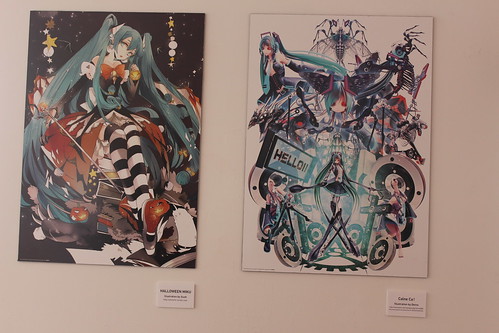 I utterly adore the Halloween Miku illustration, I think I was honestly drawn to the other illustration the most out of all of the illustrations though. There are a lot of really interesting elements in the picture and I kept on coming back to look at it again. 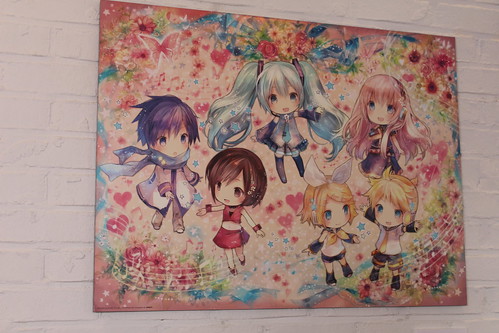 I think this one was the favorite of all of the illustrations, I love the soft colors and the overall aesthetic of this piece it just looks so whimsical. I love the music motif and all the little stars and hearts too. 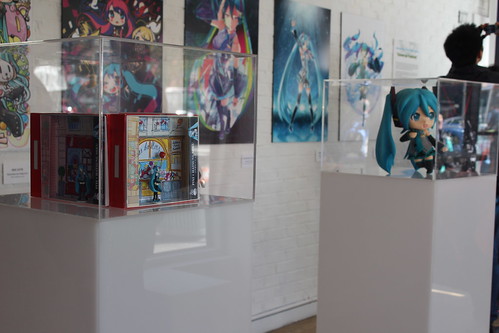 A different view of the gallery. There were two displays in the center a gigantic Miku nendoroid as well as some information about a Miku Expo in France, I believe? 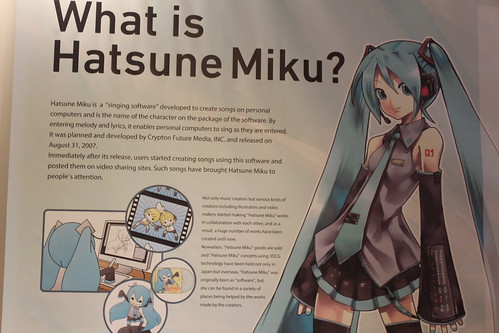 They had a giant poster explaining who/what Hatsune Miku is on the second floor of the museum. There were also a bunch of figures on display as well as another bank of screens showing more Miku videos. 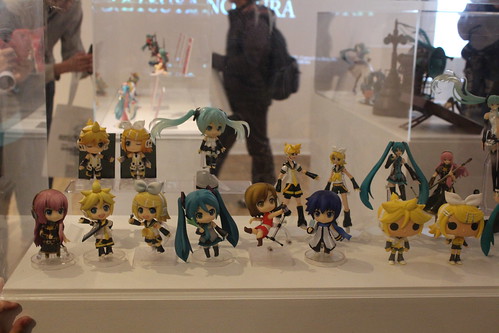 I was really excited to see so many Vocaloid figures on display, my excitement kind of paled when I realized that I in fact all but the Rin and Len Append nendoroids in this shot ^^;. I quickly went from figure envy to display envy, I wish my figure displays were this nice and well organized! 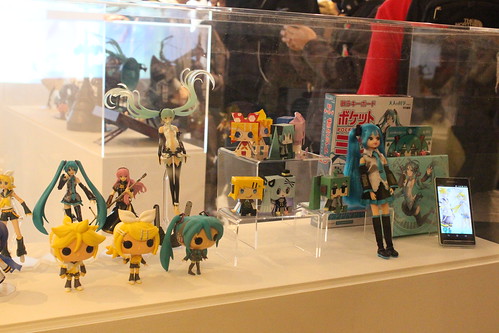 Some more Miku items including the Licca doll and several papercraft Vocaloids. 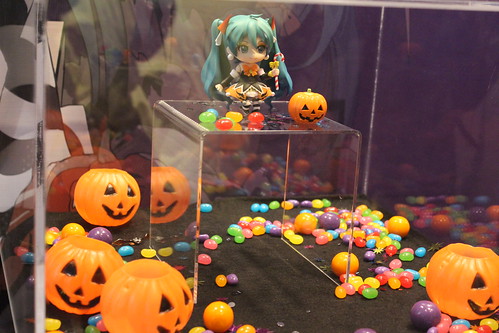 This strange journey all started because of the Halloween Miku nendoroid, I was randomly browsing Facebook and I happened to see a promotional photo of it. I don’t keep up with the latest anime figure news as much these days so by the time I had noticed it’s existence it was old news, preorders were already closed but she was also supposed to be available at the Miku Expo. There is a Miku Expo in New York and a cute figure I can get at it? I’m there. Alas, it was not meant to be she sold out but they still had one tantalizingly on display. So close but yet so far, curse you plexiglass! 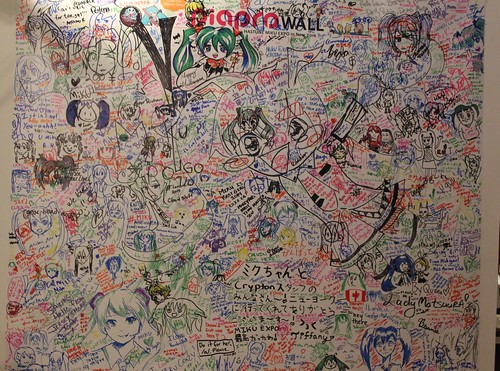 There was a place you could sign your name or draw a picture, as you can there was not very much room left to do either by the time I got there. I love how colorful it is and all the different illustrations of Miku on it. 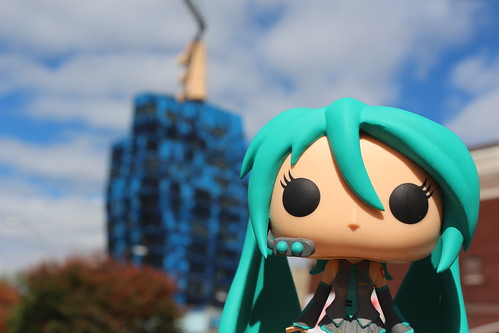 Somehow going to New York always seems so surreal to me, not so much when I’m there but like the next day when I’m back…it’s like wait did we really drive all the way to New York City yesterday? Did that really happen or did I just dream it? 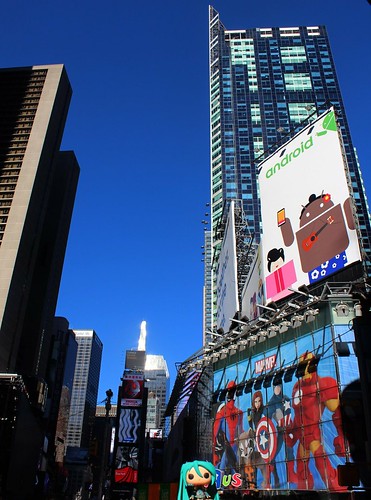 Since we were in New York, we decided to go to Times Square and check out the gigantic ToysRUs and Disney Store there because zilla had come along with us. 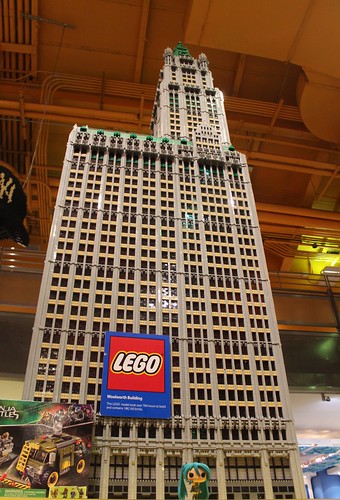 Did I buy anything?  Yes but not at the expo itself as by the time I went to the expo, the Halloween Miku nendoroid and most of the posters were sold out. I was bitterly disappointed about the Halloween Miku nendoroid being sold out. Since I hadn’t found anything at the expo we did go to Kinokuniya Books afterwards and I did buy some stuff there. I ended up with some Miku Expo orgami paper, a Read or Die art book, a couple random volumes of Puella Magi Madoka Magica and a really awesome collapsible storage bin featuring Charlotte from Puella Magi Madoka Magica none of which is exactly photogenic unfortunately (also stuff for the kid at the Disney store/Toysrus).

All the way home I was fixated on the Halloween Miku nendoroid and how very badly I had wanted her and how she had eluded me. On a related note, I received a package this weekend… 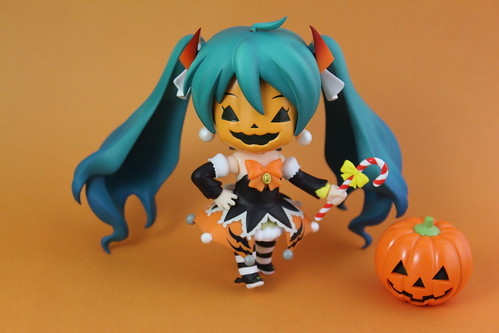 Finally victory is mine and it smells like pumpkin! I have Halloween Miku even if she is no longer in season (she does have a candy cane so she is still relevant). I ended up paying about $65 for her, she would have ran me about $45 at Miku Expo if she hadn’t sold out but I can live with the price difference. 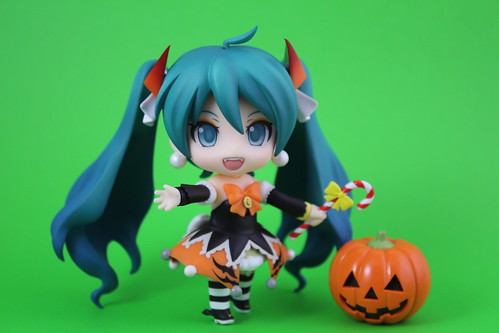 I can not get over how perfect she is, she was well worth the wait! 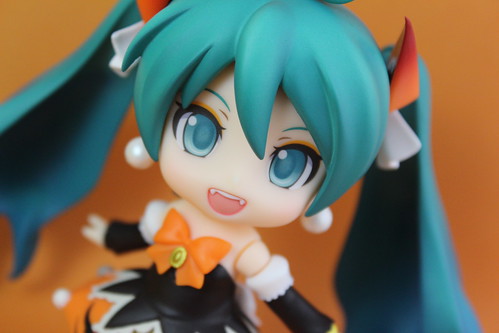 She is just way too adorable for words! I love the contrasts of the black, white and orange colors against her almost teal hair color it really, really makes the orange pop. I’m a big sucker for Halloween themed stuff in general but this figure just takes the cake or should I say she takes all the trick or treating candy? 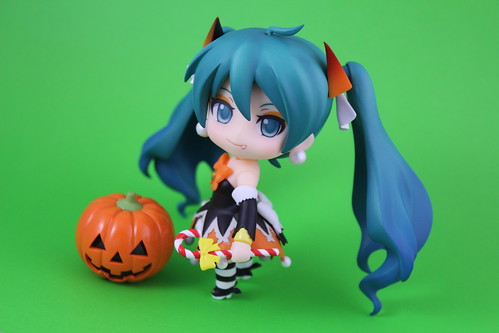 Could you imagine if Groove partnered with Vocaloid again to release a Halloween Miku Pullip in time for Halloween next year? It would be amazing. Groove has made a few seasonal Miku Pullips already….a girl can dream, right?

More pictures of my adventures in New York are available on my flickr.